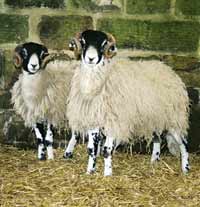 Finishing horned hoggets for the late spring market can be a risky business, but the upturn in all prime sheep prices has fired enthusiasm among northern hill farmers.

Even though lambing is under way at Newbridge Farm, Sutton-in-Craven, Keighley, there’s still a shed full of well-shaped Swaledale hoggets to sell over the next few weeks. They will be the final draw from a system that Mr Airey admits “can be challenging”.

“Good conformation, some size and length are essential to give you a frame to put flesh on. But what you feed and when you feed it is just as important,” says Mr Airey, who produces about 300 pure-bred Swaledale hoggets from his flock of 800 ewes.

An early April draw, selling deadweight for the first time through Dunbia at Clitheroe, Lancashire, saw the best (R3L) of the 25 hoggets reach £3.85/kg. “It was a useful exercise for me. Some were where they needed to be, others could have been improved on. But we’re still learning; they were heavy enough at an average of 20kg,” says Mr Airey.

All hoggets are left entire to achieve more frame. “It gives us a bigger and better-shaped carcass to work with.”

Lambing starts in mid-April – the flock scanned at 128% this year. Ewes with male Swaledale lambs are run on in-bye allotment land. “In the past we’ve tried to get a few away on the lightweight export market in late summer, so we like to give them the chance of some better ground. Last year, because of the bad weather, we ran them through into autumn.”

Lambs are weaned in late August with a couple of batches of the “more fleshy” male lambs – weighing about 28kg – sold liveweight straight off the ewes.

“But the period after weaning is the high-risk time for these lambs and they can take a real dip in terms of body condition. They can easily go down with pneumonia around this time of the year. We do try and nurse them through early autumn to keep them right and have even tried vaccinating before weaning instead of after in an effort to reduce the stress level.”

Lambs are moved to old grass pasture after weaning but Mr Airey admits the most difficult time for managing them is from October to mid-December.

To overcome this awkward stage the intention is to house all Swaledale hoggets from late autumn and to feed them a “highly palatable and high energy” ration – probably based on a moist-type feed such as brewers’ grains – to arrest the decline in condition.

But experience has proved Swaledales aren’t keen to start feeding from troughs indoors. “On our current system we usually start bringing the Swaledale finishing lambs inside from mid-December, but you’ve got to use every trick in the book to get them to eat.

“Even when they start taking a fair amount of dry feed it still doesn’t seem to make any difference for quite a while. So we need to stop them dropping so much condition in the run-up to Christmas and help us avoid having to play catch-up to get them back on track.”

By the New Year the best of the hoggets are drawn off the main group and gradually weaned off silage and on to an ad-lib finishing ration.

Several diets have been used, but experience has shown that high-protein “rocket fuel” rations don’t suit these hill-bred hoggets. The current diet is a cereal-based pellet which is fed for about eight weeks on the final system and takes 30-35kg hoggets to a finished weight of 45-50kg. This spring the first draw was made in mid-March with the intention of selling all hoggets by mid-May.

“It’s not an easy system. You can’t just throw food at these sheep and expect them to turn into a carcass in the same way a Mule or a Suffolk cross would. And you’ve to try and manage them so you’ve got hoggets ready to sell over several months.

“They are capable of achieving an R3L carcase, but it’s all about getting the feeding right, as well as the breeding. Finishing horned hoggets for the spring market can be notoriously unpredictable, but Swaledale breeders potentially have a high-value product in their hoggets – something that we haven’t always made the most of in the past.”

Once housed it can take a while for Swaledale hoggets to adapt to trough feeding, meaning finishing periods need to be carefully managed to ensure carcasses meet specification.