Selecting a building design with no roof is allowing expanding dairy farms to save money on new infrastructure.

Topless cubicle housing and milking parlours cost less and, contrary to perception, there is no trade-off in the comfort and welfare of cows and staff, say farmers who have gone down this route.

But there are issues that must be considered when a building has no roof.

Simon Hennessy, of Grasstec’s Farmyard Design Department, says the additional rainwater collected from roofless cubicles can increase slurry requirements by up to 80%.

Below, we consider the pros and cons with two dairy farmers who have chosen roofless facilities.

See also: How to avoid the 9 most common dairy cow housing pitfalls

At £600 a cow place, topless cubicles have provided Rory Christie with a lower capital solution for housing his large-scale, spring calving herd. 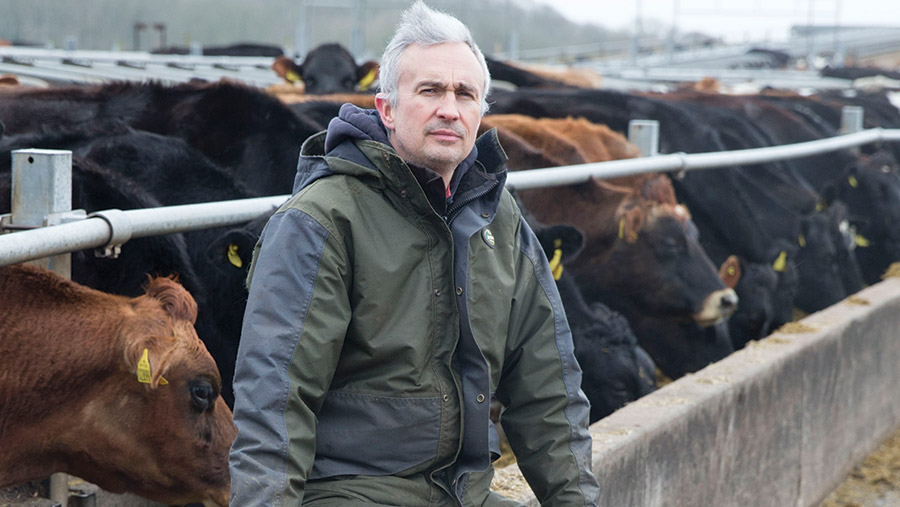 Mr Christie, who farms with his brother, Gregor, in south-west Scotland, had been running 600 cows in four separate herds until he streamlined the system to create a single herd, milking 1,200 cows.

With milk production on the Port William holding run on a lower capital system, he trialed different ways of managing the cows for the winter dry period.

They previously had cows at different locations, on fodder beet and silage bales, rough ground and sacrificed land, but it was becoming logistically very difficult and they were concerned about the potential run-off.

He sought potential solutions during a visit to New Zealand.

He didn’t find any answers but received a photograph of roofless cubicles when he returned and later discovered similar housing in Wales.

Impressed by what he saw, he built his own roofless cubicles, initially installing 500 places and expanding to 1,000.

The building and associated slurry storage facilities cost £600 a cow place, but the decision to go roofless was not down to cost alone.

“The cows are much healthier and cleaner because they are outdoors in clean air,” says Mr Christie.

“They grow hairy coats. It is the equivalent of a farmer putting on warm clothes and waterproofs to go outside if the weather is bad – they are kitted out well for being outdoors.”

The cubicles are in a sheltered position. They were built on a site once occupied by a 10,000-space pig unit and are protected from the prevailing wind by surrounding buildings.

The stalls have rubber mats and these are brushed daily with a Plant-mec motorised brush.

“We floodwash and scrape the passages every day, just like a normal cubicle setup,’’ he explains. 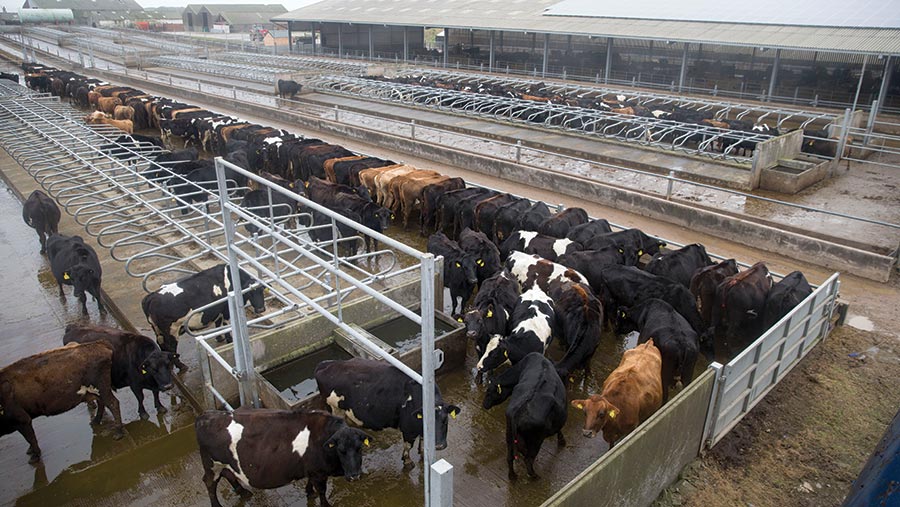 His farm is well suited to the structure – the annual average rainfall is just 1m (39in).

“It is a good solution for spring block calving herds because cows are predominately dry when they are on it.’’

The herd is Friesian cross Jersey – a robust, 500kg cow.

“They are very resilient animals. They are bred specifically for a system like ours.”

The success of the system is driven by body condition scoring (BCS) and Mr Christie manages this very closely.

“We use the New Zealand scoring system. I like them to be at BCS 5 when they are dry,” he says.

After calving in February, the cows perform well off grass as they are already acclimatised to the outdoors.

The downside is there is a higher volume of dirty water generated because the building is not protected from rainwater.

To overcome this, there is a 5m gallon slurry store that provides sufficient capacity to hold slurry and dirty water produced over 12 months.

As a safety net, the cubicle layout and feed area were designed in such a way that they can be roofed at a later stage if required.

But Mr Christie sees no reason to adapt the shed yet.

Investing in 70-point rotary parlour without a roof helped business partners Johnjo Roberts and Mat Venables stick to a tight budget when they established a new dairy unit on Anglesey. 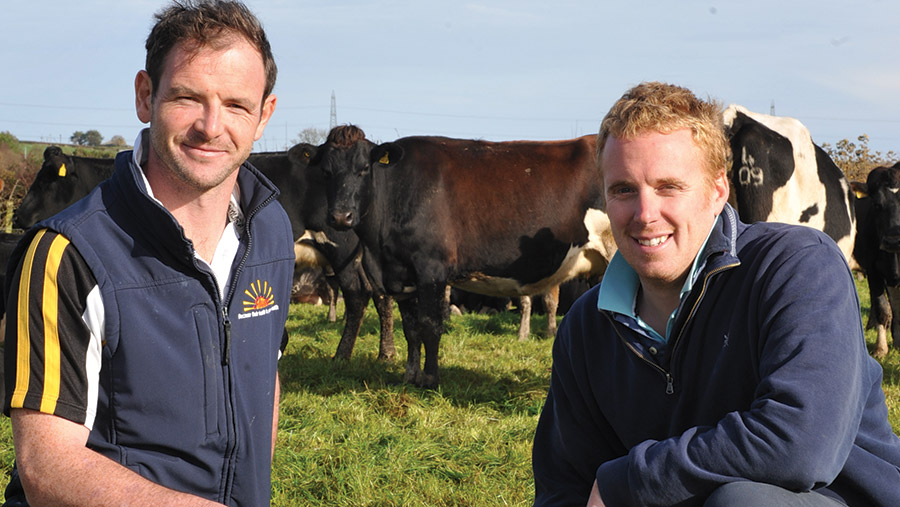 At £460,000 inclusive of all associated costs, the parlour was their biggest expense, but they made a saving of £40,000 by installing a model with no roof or walls.

Cow numbers were their priority when they set the budget to establish a new dairy unit at Bryn Celli Ddu, a 250ha rented farm on the Plas Newydd Estate.

“Capital is limited when you are setting up a new dairy. We wanted to stock the farm fully from the start, so cow numbers were a priority,” explains Mr Roberts.

The pair were already heavily invested as this was the second farm they converted to dairy; they had already established a spring calving herd as a joint venture two years earlier.

They were confident their decision to install a roofless parlour was the right one after visiting another spring block calving dairy farm in north Wales that had been milking in a rotary with no roof for 10 years.

“We had the benefit of being able to visit the farm and speak to the farmers.

“It is easier to be the second to try something than the first,” Mr Roberts adds.

At 36in, the farm’s average annual rainfall is not high and shelter is not an issue because the Waikato parlour is not completely devoid of a roof.

There is an overhang above the area where the milkers operate and this provides some shelter.

“We milked in the rotary through the Beast from the East and we had no more problems than we had with our fully covered 46:92 herringbone,” says Mr Roberts. 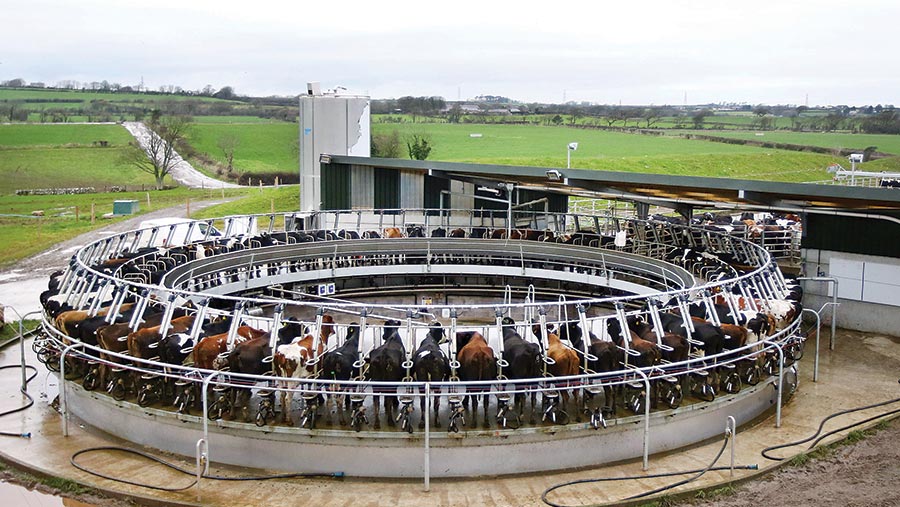 In fact, herdsman Gethin Jones, who has worked in the business since the parlour was installed in 2016, insists there are no downsides to a roofless design.

“When the weather is a bit wet, we get kitted up well, and when the sun is shining, everyone is smiling because we are out in the daylight.’’

The parlour is operated by three milkers in the spring and two at other times of the year.

Mr Jones says heifers acclimatise quickly to being milked because they are not entering a dark building.

Not having walls is an advantage for cleanliness, he reckons.

“The parlour keeps itself very clean, there is hardly any build-up of muck and when we get a bit of rain, it gets a good wash.

“It is kept very clean because there are no walls, that is a big positive.”

When the weather is at its most challenging, in December and January, the herd of New Zealand Friesian cross Jerseys is dry.

Calving gets under way at the beginning of February and only limited numbers are milked in that month.

Roofless livestock facilities can elicit negative comments on social media and the sources of those comments can be surprising, Mr Roberts admits.

“Occasionally, a photograph of the parlour will appear on social media with negative comments, sometimes from other dairy farmers, who suggest it must be miserable to work in. That is definitely not the case.

“It is a nice environment to milk in. Why spend more money on infrastructure than you need to?”