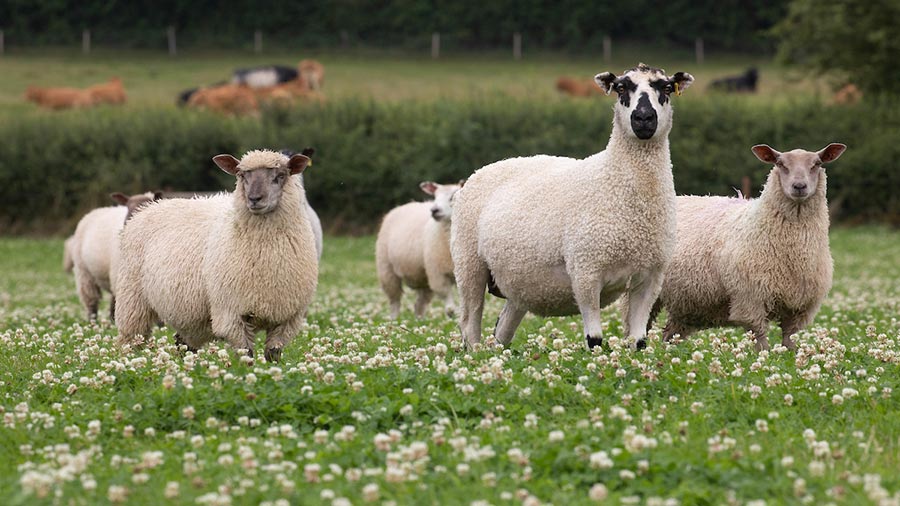 One farmer who is applying such principals to his livestock farm is hill farmer Richard Findlay.

Mr Findlay rears beef and sheep across 100ha of in-bye land and 500ha of moorland at Quarry Farm, Westerdale, in the North Yorkshire Moors National Park – about 20 miles inland from Whitby. 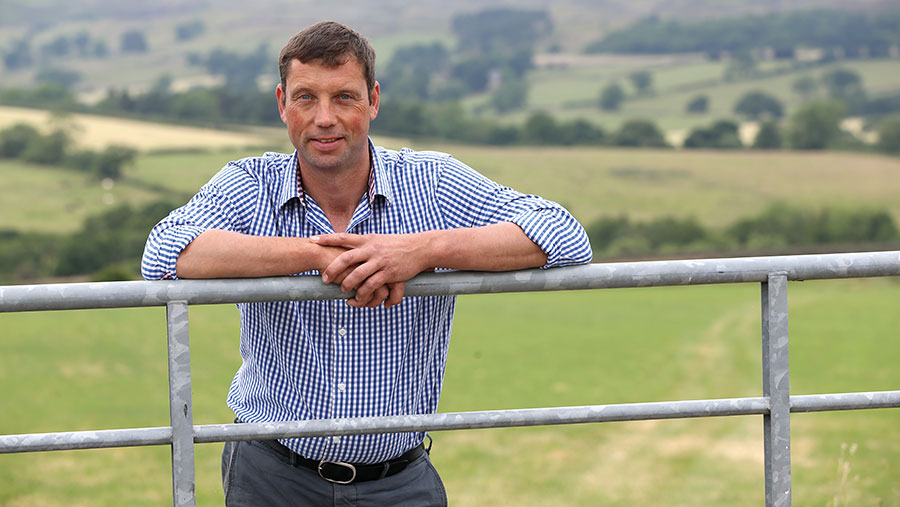 The remainder are a commercial flock of Cheviot cross Easycare. Older ewes lamb early, with the rest lambing in two groups – late March and mid-April – to spread the workload.

The beef enterprise was introduced last November. It saw 50 integrated supply chain calves brought on to the farm to utilise extra grass being grown, and to spread business risk by “putting eggs in different baskets”, says Mr Findlay.

About 20% of the farm is reseeded annually. Each year, about 16ha of grassland is put into a break crop of kale, stubble turnips or brassicas, before being returned to a high-sugar ryegrass, clover or herbal ley – depending on field and soil type.

The farm’s carbon footprint was measured using the AgreCalc calculator – one of a range of easy-to-use online tools developed for assessing and identifying ways to reduce greenhouse gas emissions from agriculture (see box).

Adopting a range of measures has seen Mr Findlay reduce carbon emissions by more than 38% over the past year – from 32.29kg of carbon dioxide equivalent (CO2e)/kg of farm output in 2019 to just 19.82kg.

“The Westerdale beef enterprise compares really well with the AgreCalc average,” says Poppy Frater sheep and grassland specialist at SAC Consulting. “It is 46% lower, which means it is doing really well. At 28% lower, the sheep flock also compares well.”

Future strategies will include feeding by-products, such as locally sourced brewers’ grain, to displace concentrate in the beef ration. Calculations suggest his will help reduce emissions from feed by 75%, said Ms Frater.

Establishing 15ha of herbal leys are expected to see a further 9% reduction in feed emissions. This was largely because herbal leys are less reliant on applications of artificial fertiliser and produce high-quality feed for ewes and lambs.

Producing more lambs by improving farm management to boost ewe fertility would increase overall emissions by 5%. But this would be offset by a 5% reduction in emissions per kg deadweight as flock efficiency is improved.

Ms Frater said: “It is always more challenging when you start with a good baseline. But using a carbon footprinting tool can give you a snapshot of where you are now and help you understand the impact of any future decisions.”

While some practices would not make any difference to farm output, others would. At the same time, reducing inputs in other areas would lead to an overall reduction in the carbon dioxide emission per kg of deadweight produced.

Mr Findlay said he first tried herbal leys after the 2018 drought. They were more resilient but also helped extend the grazing season at both ends of the year – with grass earlier in the spring and later into the autumn.

“Some of the some of the permanent pasture which we wouldn’t normally reseeded were droughted off quite badly, so we took a bit of advice about what we could do if drier, hotter summers were to become the norm.”

Creep feeding from day one had improved liveweight gain, helping lambs reach their target weight sooner and enabling them to be marketed earlier, said Mr Findlay. “We get a higher price on the back of it.”

Using high-genetic Suffolk rams selected almost purely on weight gain and meat yield meant lambs were now being sold at 10-12 weeks old. “Lamb creep has been a good investment to get the most out of the genetics,” said Mr Findlay.

“In all the decisions I have made, I haven’t really thought about our carbon footprint, I’ve thought about our bottom line. The beef calves have done incredibly well too. They have been very consistent, like peas in a pod.”

Farmers looking to overcome the loss of direct payments in England should consider seeking confidential advice which is being made available under the government’s Farming Resilience Fund.

Growers and livestock producers must ensure they are resilient without the basic payment, which will be phased out by 2028, says NFU senior business adviser Richard Wordsworth. This includes farmers who believe they are top performers.

A second pair of eyes scrutinising a farm business can sometimes identify opportunities and challenges, which are not always immediately obvious to the grower or livestock producer in question, he suggests.

“In terms of the options and support coming down the tracks from Defra, it is slightly frustrating that a lot of it is still to be published its full guise – especially bearing in mind we are coming to the end of the first year of the transition period.

“But there are options available – including the Sustainable Farming Incentive, which is due to launch next year as the first part of the Environmental Land Management [ELM] scheme, as well as a number of capital grants on the investment side.”

Defra has also agreed to fund a veterinary visit to help farmers identify ways to improve animal health and welfare. This, in turn, could help improve livestock enterprise performance and hence farm profitability.

Further work around net zero is expected to be incorporated into the ELM scheme. “It is about encouraging people to start the journey, and getting people to understand carbon calculators and they support they might need.”

You can find more details about the Farming Resilience Fund on the government website. bitly.com/future-resilience

This case study was featured at a seminar  hosted by the NFU as part of the Countryside COP initiative – a cross-industry partnership highlighting ways farming can help the UK meet its climate change target and reach net zero.

Entries are open for the 2022 Beef Farmer of the Year. Does someone you know deserve recognition for their hard work? Give them the chance to shine at one of the best nights out in the farming calendar and help to boost their career.
Enter or nominate now