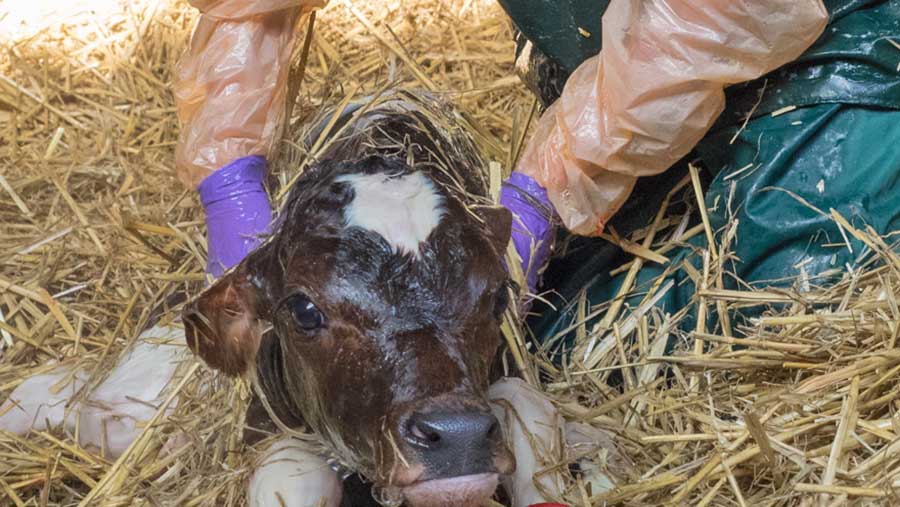 Beef and dairy farmers have reported a sharp rise in calving difficulties, sparking warnings for both autumn and spring-calving herds.

As a result, cattle are in body condition scores well in excess of three and are worryingly over-fit, according to SAC Consulting adviser Basil Lowman.

There have been more caesareans performed already this autumn than the whole of the spring put together. That is serious when you consider there are three times more spring calving herds than autumn herds in the UK, Mr Lowman said.

One herd manager reported to SAC Consulting that more than a third of its dairy heifers had undergone caesarean sections.

“For autumn calvers, it is far too late to rectify the situation by feed management. Farmers must be on alert and call the vet as soon as a difficult calving begins,” Mr Lowman said.

He advised that, when examining cows, farmers should assess how much space there was between the unborn calf and the dam’s pelvis.

“If it is too tight to put your hand in easily, call the vet immediately.”

Delaying the vet means calf survival is often only 50:50 and one in five cases see the loss of the cow through its injuries or later culling, Mr Lowman suggested.

His call to seek help immediately was backed up by vet Dan Leonard from the UK-wide VetPartners network.

It is better for the cow and her calf to have a well-performed caesarean section rather than endure a long delay or potential injury from farmer intervention, according to Mr Leonard.

Cows will recover well from the operation and can go on to have multiple successful pregnancies. But the earlier the call out, the better it is for health and welfare, he explained.

Iain McCormick of VetPartners’ Galedin practice in Coldstream, Scotland, added that farmers could reduce the risks from caesareans still further.

“Knowing there is a possibility of a caesarean, even in a normal year, farmers should set aside a clean area for the vet to work in,” said Mr McCormick.

Ideally, the area should have a water supply, a stack of clean buckets and powerful lighting like standalone builders’ lights.

A suitable crush, like a Ritchey calf gate design, with removable side bars for unhindered access, will also make the operation easier and less stressful, he suggested.

Mr Lowman added that the difficulties seen in autumn calvers should act as a serious warning to spring calving herds as the winter housing period begins.

“Excellent forage quality means the likelihood is cows will put on condition this winter, rather than lose it as they need to, ahead of calving next spring,” said Mr Lowman.

He suggested that the simplest way to get beef cows to lose condition was to delay weaning from five to six months to 10 to 11 months.

But he said reformulating rations to help cattle lose condition was complicated and farms should seek advice from nutrition specialists.

Hefin Richards of Rumenation Nutrition Consultancy advised farmers not to delay taking action if spring calving cows were too fit.

“Leaving it until January to reduce condition will affect the calf weight and cause the dam nutrition problems,” said Mr Richards.

Anyone with overfit cows must act now because it is better to take condition off gradually, he said.

Where possible, cows should be left at grass longer this year, even into November, he suggested.

But if that was the case he advised farmers to ensure the correct minerals were supplied and to keep watch for deficiencies like staggers.

If extended grazing is not an option, he suggested grouping dairy and beef cattle at housing according to body condition and restricting access to silage.

“Rations can then be tailored to ensure the thinner cattle don’t lose further weight and fitter animals don’t continue to put on condition,” Mr Richards said.

In place of the silage, he suggested mixing straw into dairy rations.

But he said feeding too much straw could cause mineral and other nutrient deficiencies and he urged beef and dairy farmers to seek advice.