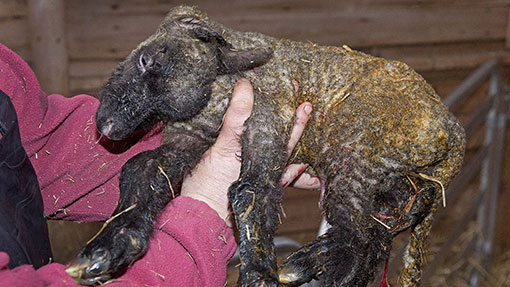 No cases of Schmallenberg virus have been reported in newborn calves and lambs this year, say government animal health officials.

Foetal abnormalities in livestock confirmed as Schmallenberg virus have not been detected in England, Scotland and Wales.

Schmallenberg is not a notifiable disease, but farmers are being asked to remain vigilant for clinical signs of the disease and report any suspected cases to their vets.

“Farmers should continue to remain vigilant for clinical signs of Schmallenberg virus (SBV) and contact their veterinarian if they have any concerns and for general advice and guidance,” said a spokesman for the Animal Health and Veterinary Laboratories Agency (AHVLA).

“There is evidence from Europe and the UK that herd and flock immunity can reach good levels in general, although this cannot be assumed.

“Vaccines are also available for SBV. Farmers are advised to consult with their veterinarian before making business decisions about vaccination.”

The AHVLA is continuing to conduct passive surveillance, which provides an indication of any spread.

In Scotland, monitoring by vets from Scotland’s Rural College (SRUC) has revealed some suspect cases, but all have tested negative.

Colin Mason, SRUC veterinary centre manager in Dumfries, said vets expected the disease to spread during the second half of 2013 with deformed calves and lambs being born in the first six months of 2014.

But discussions with veterinary practitioners working in areas where confirmed cases were seen last year, revealed there have been no cases so far this spring.

“It’s surprising, given the mild autumn and winter we experienced. But so far it seems the risk of SBV infection establishing throughout Scotland remains low,” said Mr Mason.

But he stressed that no one should assume the disease was no longer a threat and a urged a need for “continued vigilance in case of outbreaks in Europe and other parts of the UK”.

Schmallenberg virus is transmitted by biting midges and it was first detected near the German town of Schmallenberg in 2011, but later spread to other parts of Europe.

In the UK, the virus was first reported in the south of England early in 2012. The first confirmed case in Scotland was identified on a Dumfriesshire farm in March 2013.

The Schmallenberg virus causes mild to moderate symptoms in adult cattle, including fever, reduced milk yield and diarrhoea, and stillbirth and birth deformities in sheep, cattle and goats.

Meanwhile, the European Food Safety Authority (EFSA) this week published a report providing an overview of the latest scientific research into the Schmallenberg virus being carried out in member states.