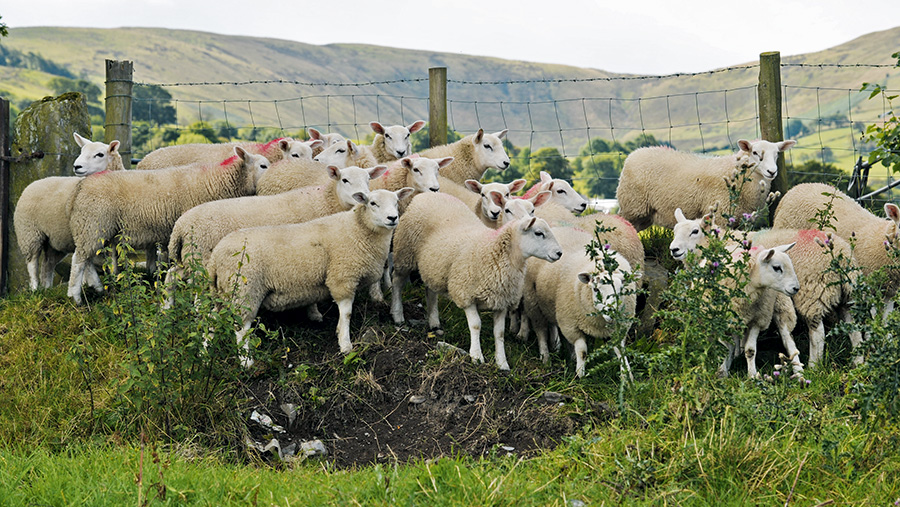 Submitted picture DO NOT REUSE

Berwyn Hughes and his nephew, Aled, run a flock of 300 Texel crossbred and Mule ewes and 600 Welsh ewes at their hill farm in Denbighshire.

They have increased the number of Texel cross-bred sheep in their flock for several reasons, but primarily because the lambs attract a higher sale price.

“There can be a difference of £15 a lamb between the Texel and the Welsh lambs,” says Aled.

“These lambs have better back ends, a better killing out percentage. That’s what the buyers are looking for.

“A lot of farmers lamb their ewes and just take what the market will pay but that is my wage so if the market demands a certain type of lamb we must try to produce those better.”

Farming 283ha of land that rises from 700ft to 1,500ft limits the number of cross-breds the Hughes family can keep.

“We would love to produce more but unfortunately we have to farm within the constraints of our climate,” Berwyn concedes.

“If we had more grass and more housing we would lamb more ewes indoors earlier. The Welsh ewe is a hardy breed; it has its place on rough mountain land.

“The Texel wouldn’t thrive on that type of land and neither does it like the company of other sheep. Most cross-breds like a lot of space.”

The Texel was first used on the flock 15 years ago and numbers have gradually increased. Berwyn says the reason why is apparent from the moment the lamb is born.

“The Texel lambs are on their feet straight away; they are lively when they are born. That is important for us because we are lambing outside.”

Six Texel tups are sourced each year, from the Texel Sheep Society sales at Ruthin.

“We are very lucky in north Wales, there are a lot of good Texel breeders. We look for good length, good wool and a good back end.

“When we breed ewes to a Texel tup we have got to try to get milkiness into that animal,” says Aled. He aims to pay between £400 and £700 a head.

Ewes are grazed on the mountain until three weeks prior to tupping; they are flushed hard on the lower land. Fifty cross-breds are sponged to lamb indoors in February, ahead of the rest of the flock, which lamb outside in March and April.

The early born lambs are fed creep to catch the market before the middle of June.

Berwyn reckons lamb producers need an alarm bell to sound at the beginning of May to push the lambs harder to get them fattened and sold to catch the better trade.

“At the end of June the prices always start to fall.

“I don’t know why we as farmers don’t take more notice. Perhaps we are a bit old fashioned and do things in a certain way because that is the way our predecessors did it.”

Lambs are sold liveweight at Ruthin and Bala livestock markets and also through Farmers Marts’ auctions at Dolgellau and Machynlleth.

Berwyn has been a director of Farmers Marts since 1954 and is a firm advocate of the live market system.

“We have dabbled with selling on the hook but it’s not for us.

“If we are not happy with the price we are offered in the market we can bring the lambs home although the six-day movement standstill rule is a nuisance at times.”

Aled’s father Hywel – Berwyn’s brother – died when he was just 54 but some of his ideas live on. In an attempt to counter lameness, Hywel believed in culling problem ewes.

“He was a firm believer that bad feet were a genetic trait so he tagged all the problem ewes one year and they were culled.

“After we got rid of those lame ewes we didn’t have any problems for a while after that. We won’t keep rams that are continually lame.”

The sheep are run through a foot-bath every time they are handled.

They are also blood tested every two years to monitor their metabolic status.

A copper supplementation is given because the farm has a high molybdenum level.

Ewes are culled at six or seven years.

Berwyn and Aled share great pride in their flock and from producing top-quality sheep.

“If someone comes onto our farm and sees our sheep we want to be proud of them and that is why we put so much into the breeding,” says Berwyn.