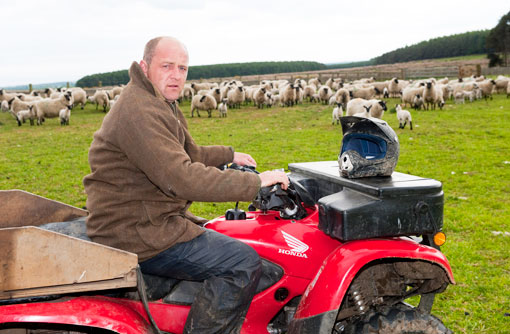 Lambing is now finished and what a battle it has been. The forecast made us move nearly 1,000 lambing ewe hoggs away from the river at one farm, starting at 5am. They were all moved by lunch – 30 newborn lambs were lifted – and not long after the entire farm was out of sight under five to six feet of water.

At another farm, the fences were cut and all the sheep were led into the woods. Jane came back with a full car load of perishing lambs; these, along with others, were at death’s door. Two great big diesel space heaters were used to warm them up and most survived. One of the saving graces was the fact that two days before all the rain we had a lot of ewes scanned as singles and lambing outside. These were all brought inside and 24-hour lambing began again – much to the delight of the two night staff who had finished a week earlier.

Huge tyres have been fitted to the Land Rover as the Kubota won’t move it’s so wet. But it’s experience that’s worth its weight in gold in conditions like this – sometimes it’s best just to stay off the sheep and do nothing. It’s fair to say, on a whole, the past month has been hell for sheep and men alike. Even the grass has disappeared completely and what is left is now purple.

Fortunately I have been way too busy to phone Mr DEFRA, as he still has not sent our manual payment for our SFP. I have a feeling we are going to be paid in gold, but this chap is panning for it somewhere in the world.