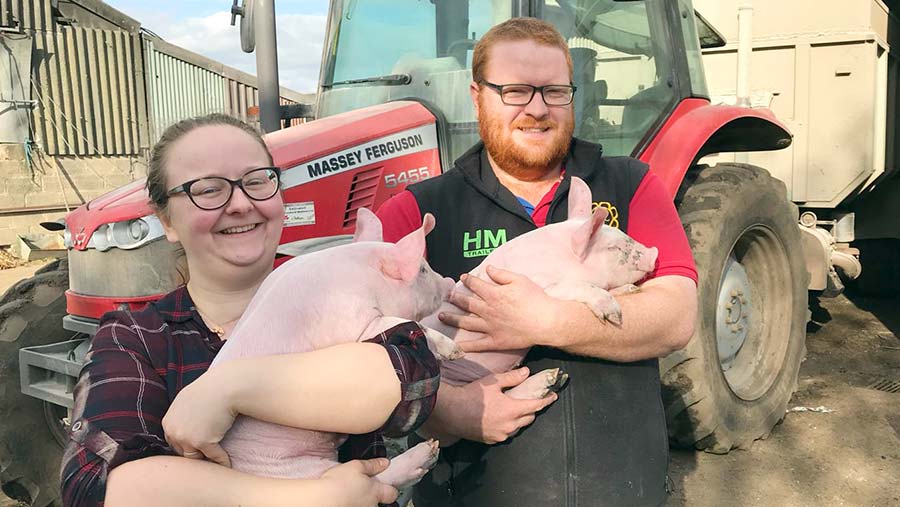 Tom Mapes and wife Cassie were employed by Tom’s stepfather Rob and uncle Chris Leamon at their 300-sow, breeder finisher unit in Essex in the autumn of 2016.

The couple had relatively little experience of pig production following careers outside farming, so they enrolled on a practical AHDB Pork Stockman course.

One of the first points the Mapes improved was the farm’s conception rates – by approximately 10%.

Under the guidance of their AHDB mentor they carried out a heat-detection study, which revealed sow heat periods were too early and weak.

“We learned that a common mistake, contributing to weaker heats, is keeping sows and boars together too long or housing them close together,” says Mr Mapes.

The proximity of the boars meant sows came into a partial heat, too early. It is a less intense heat, which means ovulation is depressed and this was contributing to lower conception rates.

To combat the issue, boars were moved further away up until the point of service. The more rapid introduction into the farm’s serving pod stimulated a deeper and more intense heat period.

The pod itself is also a recent improvement. It holds three boars in a central section and two rows of eight sows along each side.

“It is a very efficient system and gets 16 sows ready for service at a time. It is also a low-stress set up because, unlike individual service, there is less intervention from the stockman,” Tom says.

This year’s hot weather has reduced rates slightly but they are still better than they were two years ago, says Mr Mapes.

Introducing changes to reduce stress on the sows and piglets at Leather Bottle Farm has helped boost numbers weaned per litter by 20%.

One of the changes brought in followed a talk at Essex Pig Discussion Group by a Writtle College student, who following their thesis, recommended introducing radios to help reduce sow stress in the farrowing house.

Although the Mapes were slightly sceptical at first, they tried it out and achieved rapid results.

“We were so impressed that all of the houses now have radios tuned to a variety of different stations with the same effect, even with the young gilts,” he says.

An additional tip was to provide shredded paper to the sows at the start of farrowing week.  Shredded paper can still be used on a slurry-based system. 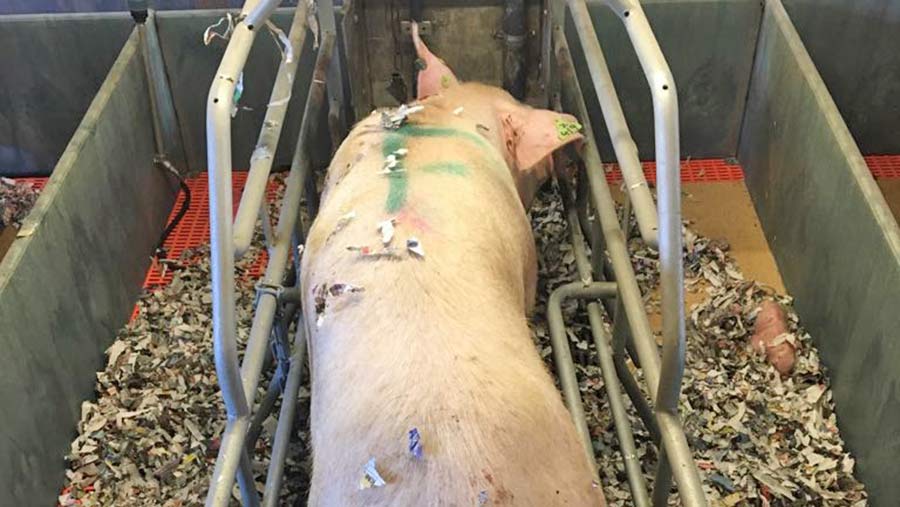 A sow mid-farrow with the shredded paper. The first piglet born has already nested into the paper

It is another tip that could easily be dismissed because of its simplicity, but it has been effective in reducing stress at farrowing.

“We offer a bundle of shredded paper placed at the head-end of the crate. As farrowing approaches the sow starts to nuzzle the paper and move it around as part of her natural nest-building behaviour,” Mr Mapes says.

The move has had a double benefit.

Allowing the sow to express her natural behavioural patterns has reduced stress and restlessness ahead of farrowing, making the process far calmer. The additional benefit is the piglets are kept drier, warmer and draught-free.

Reducing stress and other initiatives for the sow and piglets has seen average numbers weaned increase from 11.13 piglets weaned/litter in 2016 to 12.8/litter last year and 13.45/litter in 2018.

Further evidence of the reduced stress levels can be seen in a drop in the use of the sedative Stresnil.

“In the previous quarter we used 33 doses of Stresnil to calm down the sows.

“But after the changes were put in place we only needed 11 doses in the following quarter, which shows how small tweaks can have big results,” Tom suggests.

This had already seen an improvement in weaning weights and more evenly sized litters, with knock-on benefits of better growth rates in the finishing herd,  lower use of antimicrobials, and no requirement to use zinc in diets.

Weaned weights then further improved when the Mapes took over, by improving hygiene and introducing stringent cleaning procedures of the milk lines between batches, along with training of the piglets to drink the milk.

The recording system showed that milk consumption had slumped to five litres per piglet during the whole time in the farrowing house.

The problem was being caused by milk going off in the lines, which made it unpalatable, says Tom.

At the same time the Mapes took care to ensure small piglets in every litter knew how to use the system by gently and carefully introducing each one’s snout into the milk cup to taste the milk.  The other piglets in the litter soon copied and learned to take the milk.

These improvements resulted in being able to finish pigs 10 days quicker.

The milk cups have really shown their value in this year’s hot summer, with consumption of supplementary milk reaching 23.6l/piglet, says Mr Mapes, while still being able to wean 12.64/litter at 9.55kg.

The milk-cup system also takes pressure off the sow, particularly with the larger litters being seen on the farm. No nurse sows or rescue decks are used.

“It has allowed us to maintain weaned weights when the sow’s milk is seasonally low and ensured that she doesn’t lose too much condition ahead of the next cycle,” Mr Mapes says.

As the piglets grow, the supplementary milk changes to products that contain higher levels of complex carbohydrates and proteins.

This supplementary feeding programme helps develop the piglets’ digestive systems ahead of weaning and smooths out the transition from a milk diet to a wet ration in the finishing houses.

“The resulting improved performance up to weaning means we sell our pigs at 140 days old; before the changes it took us 150 days plus to finish each pig,” Mr Mapes adds.

The course was just half a day a month, for one year and fitted in with the working week. The following year Tom and Cassie Mapes completed the Stockman Plus course.

Their keenness and knowledge gained from the training course meant that they were able to contribute quickly to the decision-making and instigate changes on the farm.

“Because the sessions are short you get back home with what you have learned still fresh in your mind – making it easier to apply,” explains Mr Mapes.

“You also still have what is going on back at the farm in your head while you sit in the classroom,” he adds.

As well as the teaching, discussion sessions with fellow student farmers have yielded valuable tips to try out. And the information is backed by a follow-up mentoring service providing guidance and advice through on-farm visits.

Check out the AHDB training schemes on: