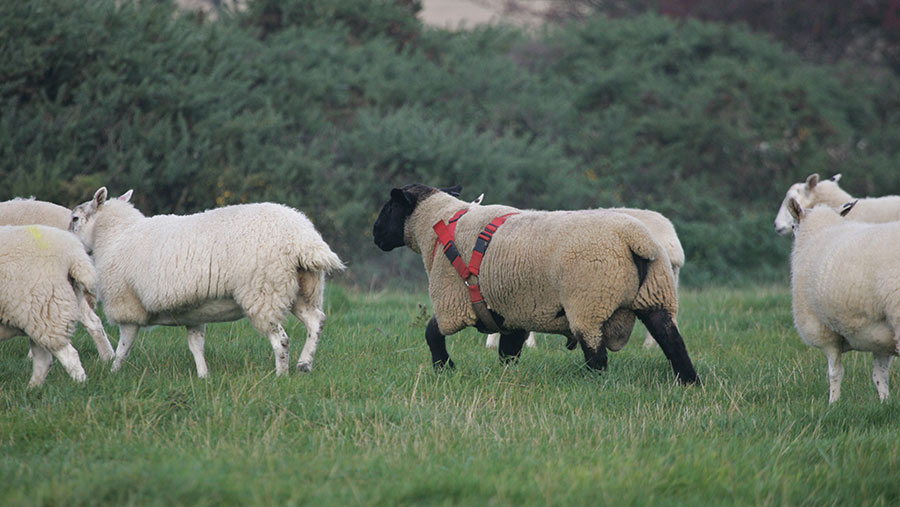 Teaser rams – those that have been vasectomised – can help tighten the lambing period by stimulating ewe ovulation.

This can maximise the number of lambs born at the beginning of lambing.

Ken Wilson, of the Donald S McGregor vet practice in Thurso, Caithness, explains how they should be used.

What is a teaser tup?

A teaser is a tup that has been vasectomised. He retains his testicles, and therefore the compulsion to serve ewes, but because his vas deferens tubes have been partly removed, he no longer produces semen containing sperm.

Teaser tups should be proven as fertile and effective. A tup should ideally be chosen after his first breeding season before being vasectomised. This will give you peace of mind that he works effectively and hopefully maximises his working life as a teaser. He should be fit and healthy and have been observed to show good vigour and ability in serving the ewes.

The vasectomy is typically carried out under sedation or general anaesthetic and it is a relatively straightforward procedure.

It is important to note the tup may remain fertile for up to four weeks after he is vasectomised due to sperm residing in his accessory sex glands, so make sure the surgery is carried out in plenty of time ahead of the breeding season.

To find out more about the practicalities of surgery with your local practice, talk to your vet.

Teaser tups can be used to improve breeding performance in flocks in both early and conventional lambing systems.

The teaser tup will mate with the ewes and produce pheromones which will induce the ewes to ovulate.

What is the suggested protocol for using a teaser?

When any tup (fertile or teaser) is introduced to a group of ewes, the ewes generally have a “silent heat” three to four days after introduction.

This silent heat is not fertile but is a necessary precursor to fertile oestrus at the start of every breeding season in sheep.

They will then go on to have two peaks of normal oestrus 17 and 25 days later.

Therefore, when a fertile tup is introduced without a teaser, there is little chance that he will start to father lambs until the ewes have their second heats at 17 and 25 days.

Introducing the fertile tup after the teaser has been with the ewes for 14 days means there is a higher chance of pregnancy at the start of the breeding period.

Day 0 Introduce the teaser to the ewes (aim for five and a half months before expected start of lambing).

Day 14 Remove the teaser and introduce the breeding tups.

The use of teasers in AI and ET programmes

In artificial insemination (AI) systems, teasers can be used after the removal of the CIDR or sponge to detect when the ewes are in oestrus, helping to more accurately pinpoint the time for AI.

Similar to AI, teasers can be used with the recipient sheep in ET systems to more accurately identify oestrus timing for embryo implantation.

Each month, we’ll be bringing practical advice from an XLVets practice on a range of different subjects.