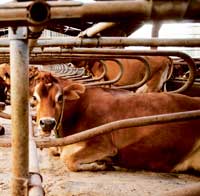 Dairy herd expansion could boost milk protein levels and reduce calving interval according to recent findings by scientists in Ireland and New Zealand.

In a study characterising seasonal calving herds according to size and rate of expansion, Moorpark’s Donagh Berry told delegates at the British Society of Animal Science Conference, Belfast how an association existed between 305-day milk yield and rate of expansion, “Expanding herds had greater milk protein percentage than herds not expanding. However, there were no other associations between herd size and milk production traits,” he said.

And with removal of milk quotas in 2013 Dr Berry expected dairy expansion to speed up which is why the study focussed on the effect of cow production in relation to expansion.

“As herds expand and as production moves to areas of competitive advantage, an expanding herd represents choice in terms of growing organically or sourcing non-homebred animals, as well as challenges as a result of managing more cows and the associated requirements for infrastructure and labour,” said Dr Berry, explaining the rationale behind his team’s work.