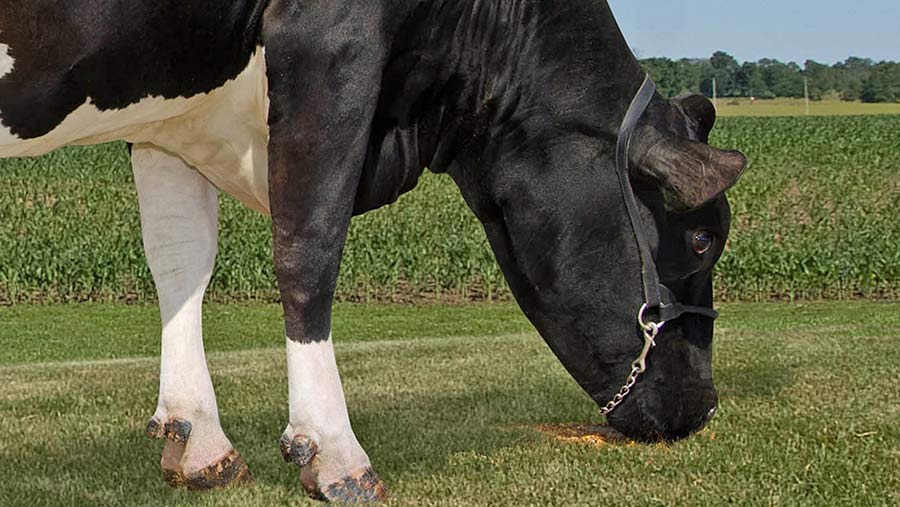 Good genetics make the difference between being average and being great, according to Lloyd Holterman from Rosy Lane Holsteins in Wisconsin, US.

The herd of 1,100 Holsteins out-performs the averages for most production and health genetic traits, as a result of breeding decisions made over the past quarter of a century

Mr Holterman selects cows that are easy and fast to milk, give high components, calve easily and need no treatment. He selects for net merit first and then for health traits. 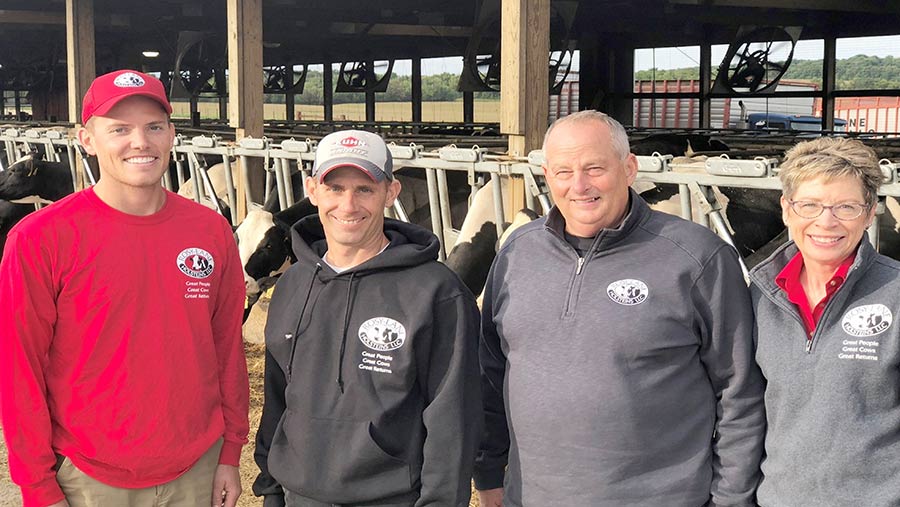 Lloyd Holterman (third from left) and the team at Rosy Lane

By using better bulls, the business increases the likelihood of improved cows, which has a significant impact on their bottom line.

1. Breed for your contract

Supplying the Saputo processor on a cheese contract, bulls are selected for fat and protein as they are paid for weight rather than a percentage.

Rosy Lane breeds for healthier animals to reduce milk that cannot be sold due to illness. Feed efficiency has only increased by 0.002, but it’s worth $55 (£42) a cow a year.

Multiplied by the number of cows, it has a very powerful economic effect on the herd.

GB producers can use AHDB’s Maintenance Index which helps to manage mature cow size and ensures animals are not being bred to be bigger and less efficient.

This trait is their primary selection after fat and protein. The herd started breeding for productive life in 1992 and Mr Holterman believes it produces cows that are shorter, rounder, wider and breed back faster.

Rosy Lane expects their herd to transmit 6.4 extra months of genetic longevity, compared with a breed average of 2.4.

“Lifespan” is the UK equivalent trait and is expressed in terms of lactations, meaning that a +0.5 point difference predicts daughters will milk for around 150 days longer than the average cow.

Mr Holterman believes DPR is the most limiting factor, producing more milk per cow by getting them into their fourth, fifth and sixth lactations.

The UK’s “Fertility Index” equivalent is a combination of traits to help breed cows with improved calving intervals and better non-return levels.

Every point increase in the index, decreases calving interval by 0.6 of a day and improves non-return rates by 0.25%.

Mr Holterman has not treated a single animal for more than 60 months.

A bull with a +5% Lameness Advantage is expected to have 5% fewer cases of lameness in his daughters per lactation, compared to a zero bull.

For every percentage decrease in a bull’s index, it is expected there will be a corresponding 1% decrease in his daughters’ mastitis cases.

6. The myth of the cow family

One of the first things Mr Holterman says he learned, is that populations breed towards the average.

When they started genomic testing, he thought every female born would be an exceptional animal.

After testing, he realised some were higher than average and others were lower than average, reinforcing the importance to continually review genetic selection policies.

“However, these traits are not like-for-like, as a handful of animals are favourable for Daughter Pregnancy Rate (DPR) used in the US, but unfavourable for the UK Fertility Index and vice versa.

We recommend you use your country’s specific economic index. In the UK, these are Profitable Lifetime Index (£PLI) for all-year-round calvers, and either Spring Calving Index (£SCI) and Autumn Calving Index (£ACI) for block calvers.”