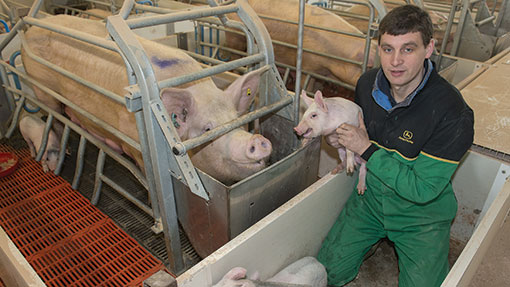 It is April again. Last year we were knee deep in snow and did not start sowing until 20 April.

This year, with a dry, windy, March, our neighbour finished sowing (all oats) by mid-March. I started sowing on the 22 March and with hardly any stop, took the drill off on 1 April.

Spring barley varieties this year are Wagon and Propino, chosen for their yield and all will be fed to the pigs. I still have some to sow, but need to spread slurry and plough first.

Ploughing the peat bog this week I’ve found it nice and dry with more stones than peat. Pity I could not sell stones.

We have had another meeting with our vet Rachelle and pig specialist David Strachan and have more or less decided on a programme for the partial depopulation. We intend to do this later in the year.

The final date will be decided after we know when the new grower building will be finished; a decision that needs careful consideration.

As with any big investment you need to get it right first time.

Two months ago we had two batches of farrowings, with very low numbers born and when they weaned they seemed to be slow at coming into heat. Some sows were 18 days later that they should be, which is very unusual for us.

Normally we would expect sows that are weaned on a Wednesday to be on heat and served five to six days later.

For the past two weeks we have been trying a fertility enhancer, top dressed on the sows’ feed for three days pre- and post-weaning.

This seems to have had a positive effect as all sows have come in heat on time, or perhaps it was just a blip and the sows would have come on heat anyway.

We will continue for a few more weeks to see what happens and observe conception rates.

Weaning numbers are continually improving, with the past six weeks averaging 12.8 pigs/sow, so as normal, pig farming has its ups and downs.