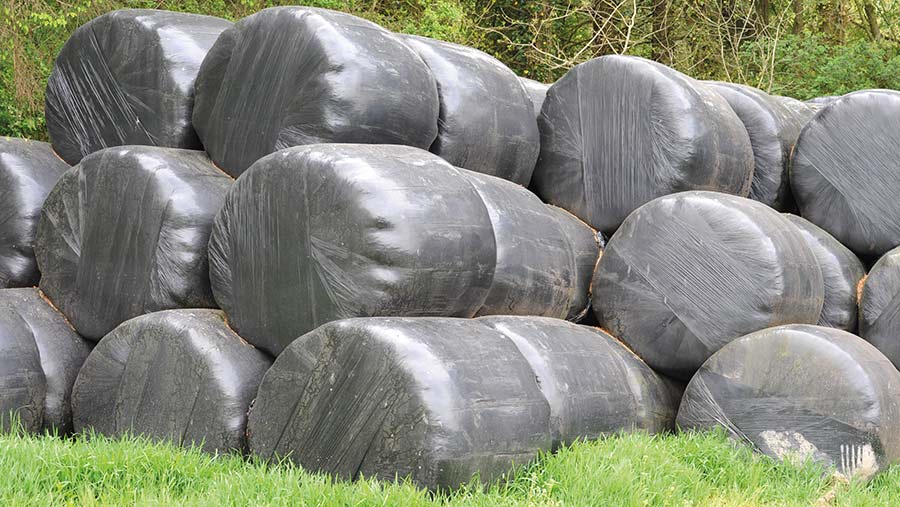 Birds are a major source of damage to baled silage, but tears can occur at the baling and gathering stages, too.

If a hole is not patched, air will seep in for the entire period between ensiling and feeding, allowing mould and yeasts to develop.

“Research at Teagasc estimates that a 1mm hole will result in a 5% loss of silage and a 3mm hole, 20%,’’ says Dr Davies, of Silage Solutions.

“There will be localised rotting of the silage around the hole, and this can extend throughout the bale over time.’’

Birds use bales as a vantage point to survey a newly cut field for prey, causing damage with their claws, but farmers also report incidence of birds pecking at their reflection in the shiny film.

“There are some farmers who reckon that black wrap gets damaged less than white or green, because the birds can see the netting through white and green and mistake it for worms, but this is all anecdotal,’’ says Dr Davies.

After a career working in the silage industry, he believes the only real solution to damage is to reduce the risk.

“There isn’t a deterrent that will stop birds, even some wraps that are marketed as bird repellent,’’ he suggests.

“Farmers tell me that using different coloured wrap or putting crosses on bales works for them, but research has shown that none of these methods is that effective. They are better off concentrating on protecting bales from other sources of damage.’’

So, what are the options for preventing wrap damage?

1. Remove the risk from field stubble

There is a real risk of damage when a bale drops onto stubble, especially so in cereal fields when arable silage is being made.

To minimise that risk, Dr Davies suggests a simple approach that he has seen in action.

“Make two holes in a cow mat, or something similar, and tie it to the back of the baler with baler twine.

“When the bale drops from the machine, it will fall gently onto the mat instead of hitting spiky stubble,’’ he says.

In mainland Europe, it is commonplace for farmers and contractors to use balers that drop the bales immediately on their ends, onto a plate angled at 45deg, which means the potential for damage is lessened since there are more layers of wrap on the bale ends.

But, although this has been shown to reduce tears, Dr Davies believes stacking bales on their barrel side is the correct method because, as the bale settles, especially if the silage has low dry matter, it will sink into the adjacent bale.

“If it is stacked on its end, it will sag and the risk of damage to the wrap, letting in air, is greater,’’ he says.

Newly wrapped silage bales should be of a regular shape and very firm to ensure plastic film is correctly applied and to reduce the risk of damage when bales are handled.

The most common method is to cover bales with six layers of wrap in the field, but Dr Davies says there is value in applying four layers at baling and a further two when they have been carted from the field.

“The four layers will hold the bales together, while applying two more layers promptly after they have been collected will cover tears and provide an oxygen barrier,’’ he advises.

The best option to avoid damage is to carry unwrapped bales to the yard area and wrap them there, he adds.

“Some farmers don’t apply any wrap in the field, they wrap them after they get them back to the yard.’’

Conversely, Marc Jones, a runner-up in the 2020 All Wales Big Bale Silage Competition, applies all six layers in the field and rests his bales on their ends in his crops of fodder beet at Trefnant Hall, near Welshpool.

“There are 10 layers on the ends, and we find this is enough protection from birds,’’ he says.

3. Use a pest-repellent bale wrap

Dr Davies suggests some pest-repellent wraps are not effective against bird damage, largely because the damage is caused by claws, not pecking.

But trials carried out in the US by one manufacturer showed that bird and rodent attacks were almost eliminated by use of a specialist film.

RaniRepel’s repellant effect is achieved through odour and taste and is available in the UK.

The additional cost works out at about £1/bale for a four-layer wrapped bale and £1.50/bale for six layers of wrap.

Silage bales are heavy – depending on their moisture content, they can weigh anything from 350-1,000kg.

This weight, combined with the fragility of the plastic film, means careful handling by equipment is needed to avoid damage.

Ensure that the metal arms on bale lifters are smooth.

If a hole is not patched, air continues to get in for the whole time the silage is preserved, and when the wrap is taken off there can be a significant amount of mould.

Punctures will result in silage becoming wetter, with a reduced dry matter digestibility and increased ash.

The pH will rise, diminishing the preservation of the silage bale, initially in the area of the puncture but spreading throughout the bale over time.

All of these factors will diminish the feed value of the punctured bale.

Inspect bales regularly before they are fed and repair any damage with silage tape.