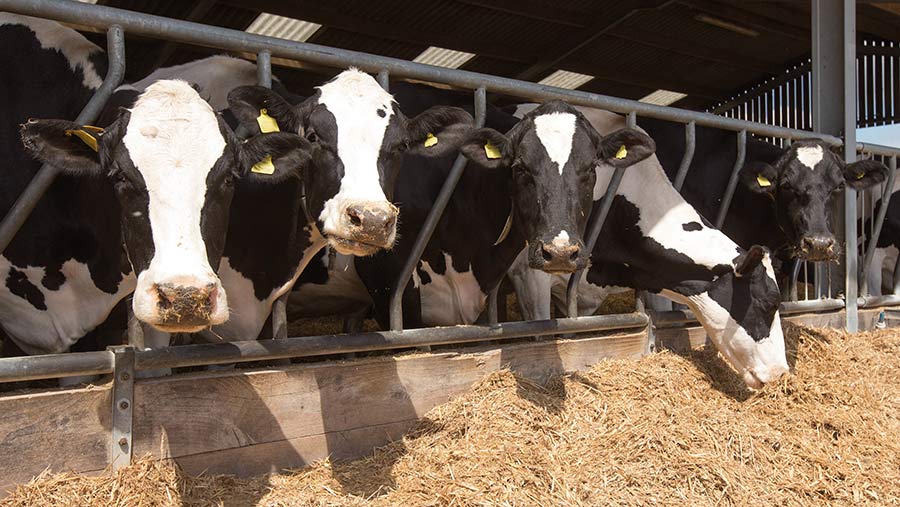 Copper is one of the most important trace elements for dairy cows, but is there such thing as too much – or too little – of a good thing?

In a recent AHDB webinar, James McCaughern, lecturer at Harper Adams University, explained more about the importance of including the correct levels of copper in ruminant diets.

See also: The benefits of growing and feeding lucerne to dairy cows

Why is copper so important for dairy cows?

Copper is responsible for energy generation in all ruminant tissues.

Without the generation of energy, simple biological functions such as growth, feed intake and body condition do not exist, which is why we see such severe implications of copper deficiencies.

However, despite all its biological significance, copper continues to be the most common trace element deficiency in ruminants.

Deficiency occurs when liver copper concentration levels fall below 19mg Cu/kg DM and in terms of visible clinical signs, there is often a change in coat colour due to the animal no longer being able to synthesise black pigmentation. This means black coats become red, and black wool tends to turn white – in the case of sheep.

From an economic point of view, the lack of energy generation caused by copper deficiencies can bring about infertility, reduced growth rates and decreased overall performance.

Copper deficiencies tend to be caused by one main scenario – when a diet, forage, or feed source contains high sulphur and molybdenum concentrations.

These combine within the rumen to create thiomolybdates, which lock up copper and prevent its absorption.

Sulphur and molybdenum concentrations vary within feed types, and as they increase in concentration, the quantity of copper available to fuel ruminants decreases – which is where problems arise.

Practical recommendations for including copper in the diet

What is the effect of overfeeding copper during the rearing period and first lactation, in terms of fertility and performance?

While there is often more concern about underfeeding copper, overfeeding can have similarly negative effects.

While death is the ultimate consequence in extreme cases of toxicity, other issues traditionally include reduced intake and milk yield, as well as a generally unwell cow.

How common is overfeeding copper?

AHDB-funded research looked at 50 herds in central and northern England and during early lactation. Results showed 40 herds were recorded as feeding over 20mg Cu/kg DM – potentially two times the requirement – and six were noted as feeding above 40mg Cu/kg DM.

According to UK cull cow data, it’s estimated that 38% of Holstein Friesian cull cows have either toxic or high liver concentrations of copper in their liver.