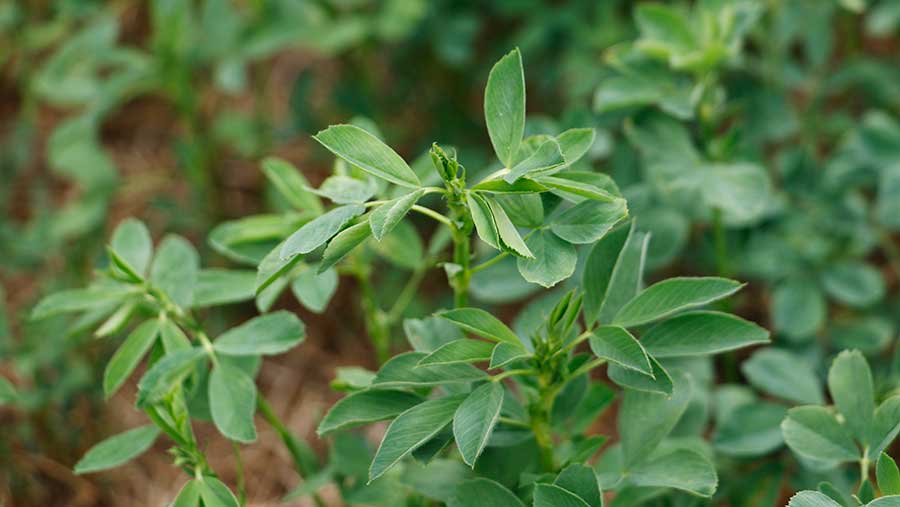 Lucerne is a popular crop across the continent but remains an almost untapped protein resource in the UK. However, it has huge potential in dairy diets to help displace imported soya and help UK farmers become self-sufficient in homegrown protein.

Rhian Price speaks to a grower and a dairy farmer seeing good results from feeding the legume.

Arable farmer Simon Gittins started growing lucerne four years ago and is so impressed with the crop he hopes to double the amount grown to 81ha (200 acres) in the next couple of years.

Mr Gittins grows 1,275ha (3,150 acres) of eight different crops and reckons lucerne has the potential to be the most profitable of all.

“Lucerne is bang on message in modern UK agriculture,” he says. ”It’s a legume so there is no need for sprays or nitrogen fertiliser. You are basically going zero-till for four years.”

He has a 1.9MW anaerobic digester and is installing a second ground-source heat system this year to take the farm’s total renewable drying floor capacity up to 5.6MW.

This is used to dry all of the farm’s cereals and OSR as well as grass and lucerne to produce high-protein, highly digestible hay. This is baled and sold locally.

“I think we will see a move towards providing more homegrown protein to displace high-food-mile soya from South America,” he says.

“Establishment is critical with lucerne. We create a stale seed-bed and then drill conventionally, ensuring the field is firm and level.”

Solid digestate is applied at a rate of 25t/ha, primarily for potash, before sowing, or to already-established crops before first cut in the spring. This provides all the potash the plant requires for that season, with little else applied because the crop fixes its own nitrogen. 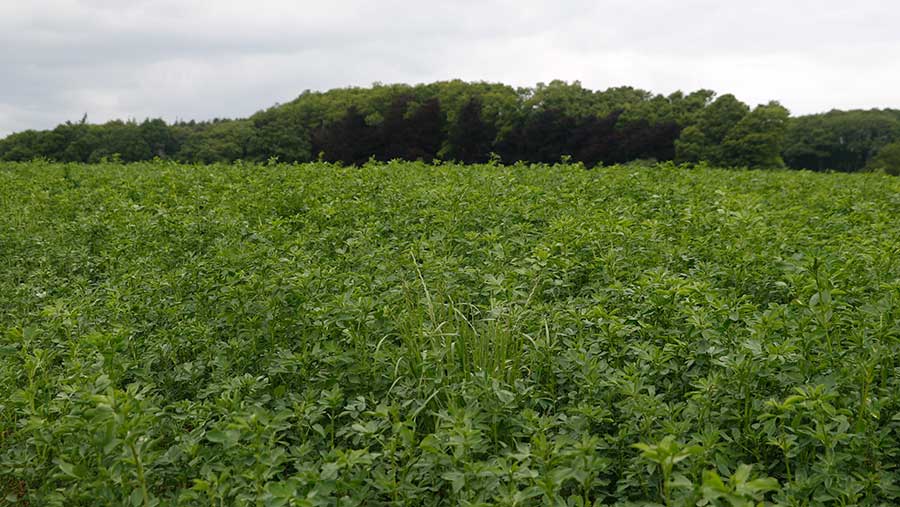 Much of the protein (70%) is found in the leaf of the plant. This poses a problem for field-dried lucerne hay as the leaf can shatter and be left in the field.

To avoid this, Mr Gittins has fine-tuned his approach to harvesting. He mows it and picks it up within 24 hours using a forage box with the knives removed.

“This ensures the leaf is retained and enables us to achieve protein analyses of 20-25%,” he says. “This is appreciably higher than most other lucerne hay on the market.”

Lucerne is taken to the drying sheds where it is spread evenly over the drying floors and stays for four to seven days until it reaches 85-90% DM. 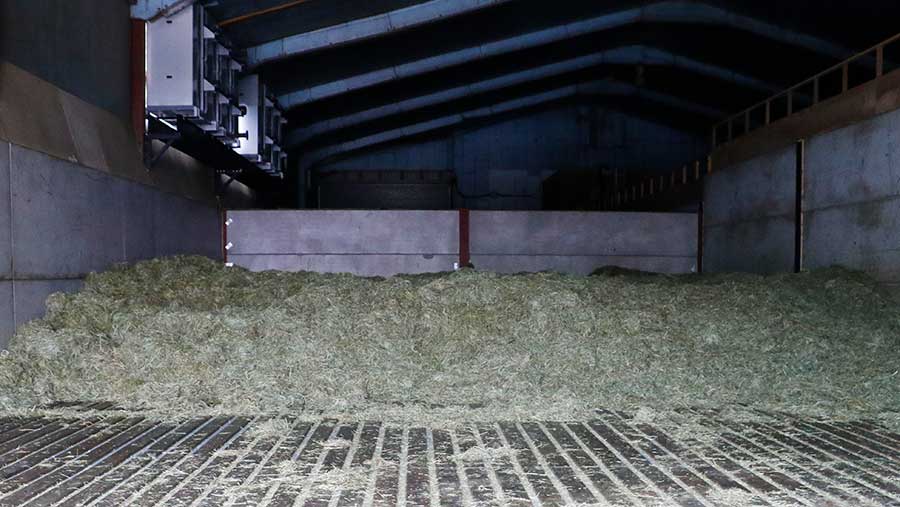 Mr Gittins has converted former potato stores into drying sheds. Ground-source and waste heat from the AD plant are used to dry the lucerne. He uses a Welvent system which draws ambient air through heat exchangers and then forces the warmed air underneath wooden slatted drying floors, on top of which sits the crop.

The crop is baled straight from the drying floor using a Claas 3200 baler. Mr Gittins has imported a HayXit19 from Switzerland to allow stationary baling. It is the first of its kind in the world and cost about £40,000.

Before he set up the static baler, a diet feeder was used to dispense the hay in a swath on the concrete. The tractor and baler would then drive up and down picking up the lucerne.

The 500kg quadrant bales are sold to dairy farmers for £200-240/t, depending on distance. They are delivered in 20t loads on lorries with curtain sides to prevent leaf being lost in transport.

This autumn the first 20ha Mr Gittins sowed four years ago will return to standing cropping. He is keen to see what impact this will have on soil fertility.

“We will be sowing wheat after lucerne this autumn. We are hoping to see a reduction in variable costs from reduced fertiliser and spray requirements, and a possible increase in yield due to improved soil health and structure.”

Dave Jones started feeding lucerne to his milking cows four years ago and credits it with improving health and butterfat.

Before he started feeding lucerne cows were suffering from sub-acute ruminal acidosis, with cud balls and loose manure observed.

Last winter, lucerne was fed at 3kg a head alongside grass silage and 5kg of blend, and Mr Jones noticed a vast improvement.

”Lucerne is a good source of fibre and high in dry matter. I sometimes struggle for fibre in my grass silage. Lucerne helped stiffen the muck up,” he says.

The milkers were fed a buffer containing 3kg of lucerne as well as grass silage at turnout this year, until April. Mr Jones reckons they transitioned more easily to grass, and their dung wasn’t as loose.

Cows are now out at grass, but they will transition back on to a total mixed ration at housing, when maize will also be introduced to the diet.

Feeding lucerne to dry cows has also improved transitional health. This year dry cows were fed 1kg a head of lucerne, alongside 3kg of straw and grass silage, plus blend.

Milk fever had been running at about 10 cases per 100 cows and retained cleansings were averaging 15 cases per 100, but these are now negligible.

But Mr Jones has been most impressed with the results he has seen from feeding calves lucerne.

He started supplementing young calves with lucerne years ago, but this year he fed more of it. A handful of lucerne is mixed in with the nuts and this is increased to ad-lib until after weaning at 10 weeks. Calves are typically kept on lucerne for another two months, when they transition to silage.

“I was feeding silage to weaned calves alongside nuts but it wasn’t really agreeing with them. They stalled a bit. Now they are growing much better. [Lucerne] is a good thing to get them started on silage.

“The lucerne is so rough and scratchy and it smells good. Once they start eating it, they don’t stop. Before we were having a bit of an issue with pneumonia and they were quite loose, but it seems to have cured that.”

He says it complements grass and maize silages well when fed at 2-3kg a head a day.

“It lifts rumen pH and increases scratch factor, making the rumen more efficient at digesting fibre and therefore enhancing the health of the cow while maintaining efficient performance. It’s the perfect antidote to starch in terms of balancing the rumen,” he says.

It also helps to improve the digestion of feeds by slowing down the rate of passage through the rumen, so more energy is captured by the cow and not excreted in the form of methane, he adds.

“It gives you a better milk yield response if it’s properly introduced to the diet. It’s the one ingredient that will outperform its nutritional value in terms of milk yield because it has a positive effect on all the other ingredients.”

In fact, he believes herds of all types would benefit from feeding the forage.

“Fed in a balanced diet, I can’t think of anyone that wouldn’t benefit from using lucerne. Even in grazed herds it would slow down [the passage] of higher-protein, low-fibre grass in the spring.”

Pros of feeding lucerne
• Contains beta carotene which promotes fertility
• Likes dry conditions so in dry periods it can substitute for hay and grass
• High in protein (18-22%), high in fibre so it is short in energy density – complements maize and grass silage
• Has a typical nutrient value of 10-10.5ME
• It is a legume, so it fixes nitrogen which makes it cheaper than other crops to grow because it doesn’t require fertiliser
• Would suit all herds – when fed to grazed cows it would slow down passage of higher-protein, low-fibre grass in the spring

Cons of feeding lucerne
• Slow to establish – expect one or two cuts in year one. Spring-sown lucerne should produce a light cut by mid-August and if sown in the summer will produce a first cut the following June
• Can be difficult to grow and harvest

General advice on feeding lucerne
• Must be well mixed in TMR
• Should be fed at 80-90% dry matter
• Must be stored in cool, dry place