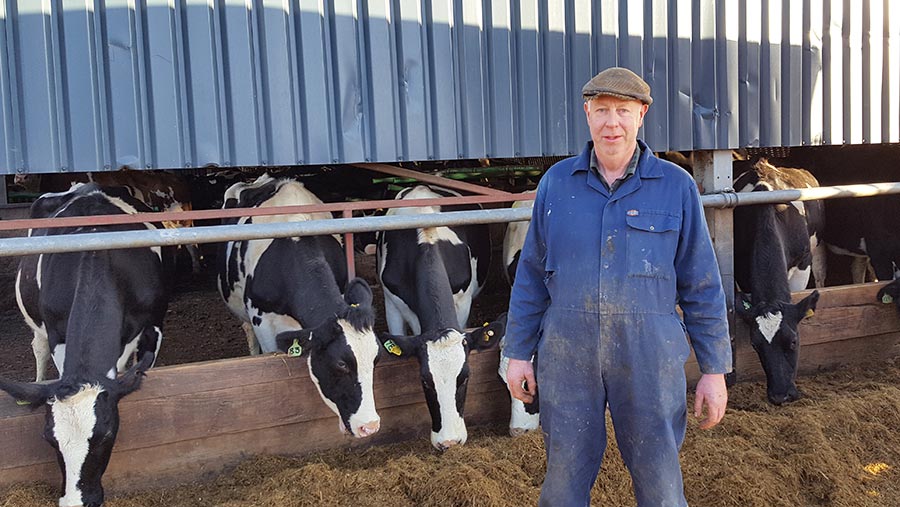 Willie Cambell on his Ayreshire farm

Winter feed costs have more than doubled on one Ayrshire farm which found itself at the epicentre of the summer deluge this year.

“It rained as we were getting ready for first cut and it kept on raining throughout June,” Mr Campbell said.

A brief weather window allowed a first cut to be taken. But after that the rain continued.

“We had to house the herd in early July because the land was under water. It was so bad we couldn’t get on to make further silage cuts,” Mr Campbell said.

“We are buying in straw and have pushed up the concentrate feeding. But it means our costs have risen from 6.2p to 14p/litre,” he said.

Our costs have risen from 6.2p to 14p/litre Willie Campbell, dairy, beef and sheep producers

In a bid to make some forage, Mr Campbell harvested 12ha of wholecrop silage in November.

“We could only get on to the land because it had frozen solid.

“I don’t know yet what the quality of the feed will be but we are that short of feed that anything will help,” Mr Campbell said.

“But we are better off than some. The silage we did make was reasonable quality and quantity so even though we are low it has kept bellies full.

“Other farms around are suffering more. One nearby will run out of forage between Christmas and New Year.”

Cutting the wholecrop in November

One silver lining is the camaraderie among the hard-pressed community.

“There is a Dunkirk spirit and we are all working for each other. We have a small buying syndicate and if any one of us hears of cheap forage we get in touch with each other so that none of us misses out,” Mr Campbell said.

The wider farming community is also rallying around.

“When we have approached farmers to buy forage they have sold it to us at a very fair price. Knowing how badly we needed it they could have made a quick profit at our expense but not one single farmer has done so.”