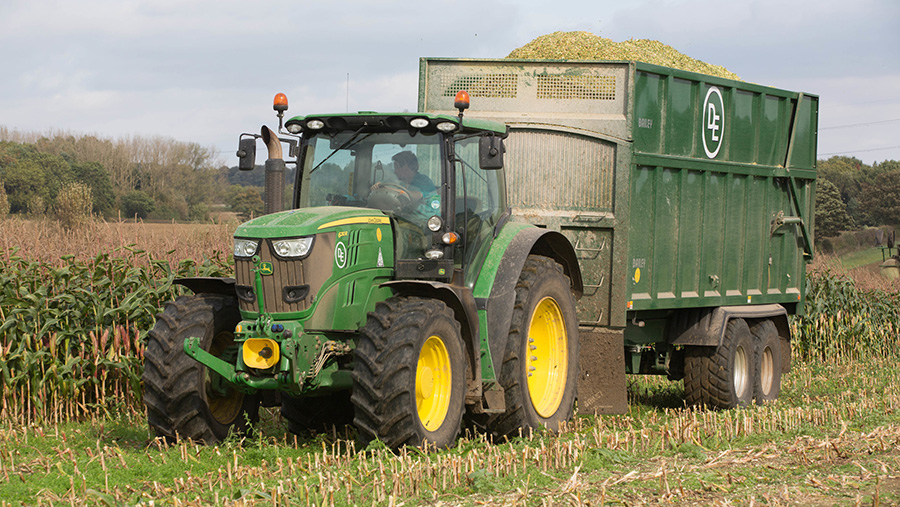 “The unusually warm weather in September kept many crops green, but the recent cold nights have switched the plants into finishing rapidly as plant sugars in the leaf are moved into the starch in the grains – the plants want to finish now,” says Mr Groom.

To keep an eye on maturity, Mr Groom recommends farmers walk their crops twice a week.

He says having a rotary brush on the roads to keep soil off the highway will keep nearby residents happy and reduce conflicts, and recommends using a sweeper tractor straight away, rather than waiting for a complaint.

Growers also need to be ready to use post-harvest cultivations immediately after harvest, he says.

He recommends farmers either drill a following crop or rip the stubbles to ensure rain soaks into the soils as soon as the forager leaves the farm.

Some harvesting teams now have an integrated ripper working on harvested fields as the harvest teams leaves the farm.

Simon Davies who samples for Farmers Weekly is getting close to harvest.

“We have some tremendous crops this year and I think we will harvest in the next week.

“My clamps are ready and I am using an oxygen barrier sheet this season to reduce waste on the top of the clamp.

“We have to get the most from our forage to reduce costs which may mean spending a little extra on sheeting, but if it stops waste it must be a good thing.”

“Locally we have seen crops with late eyespot on the top third of the plant. Next year I will treat any fields that are continuous maize with a fungicide to keep them clean,” Mr Davies adds.

“The hot weather in July stopped the eyespot developing.

“We had seen early infection in early July but when the temperatures hit 30C it stopped the disease from developing.

“We can’t rely on this every year, so a fungicide to protect the leaf for six weeks so is a good investment”.