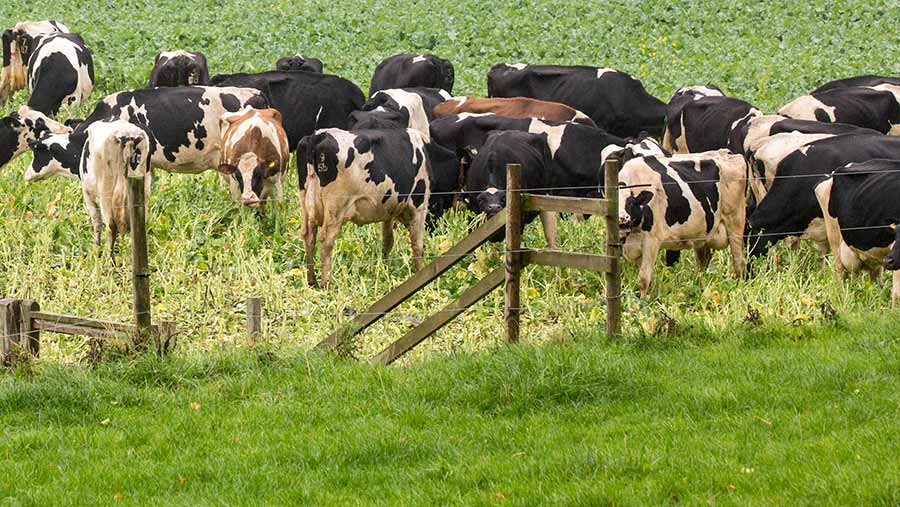 It costs between £1.20-£1.50 a head a day to house cattle, but wintering outdoors offers dairy and beef producers an alternative that can halve expenditure in some situations.

Whether it’s a self-feeding system on grass or a forage crop, or wintering cattle in a well-designed woodchip corral, each can remove some of the pressure during the housing period.

We spoke to three specialist consultants to examine the options.

Well-managed brassica and forage crops can provide cheap, high-quality feed, but before allocating land and planting, an important first step is to create a feed budget, to work out how much crop you need.

This will vary according to animal type and the crop being grown, because there is a variation in the dry matter (DM) yield of feeds such as fodder beet, kale and swedes.

See also: How next generation are learning to farm livestock without subsidies

As a starting point, Adas consultant and beef farmer Marc Jones, who outwinters his own cattle on fodder beet, recommends calculating how many kilogrammes of DM each animal needs for the winter.

As a guide, for a dry suckler cow he advises 12kg and for growing cattle, 2.5% of their bodyweight.

For growing animals it can be tricky to work out an accurate requirement, so factor some leeway into your calculations.

As forage crops and brassicas are generally lacking in structural fibre, an additional source of coarse fibre is needed to maintain rumen function.

Big bale silage is ideal for this so, once the total number of hectares of fodder crop needed has been calculated, work out the number of bales required.

“For cattle on fodder beet, we aim for growing cattle weighing 400-450kg to have 12kg DM in front of them. That figure includes 2-3kg of silage,’’ explains Mr Jones, who is growing 21ha of fodder beet this year. 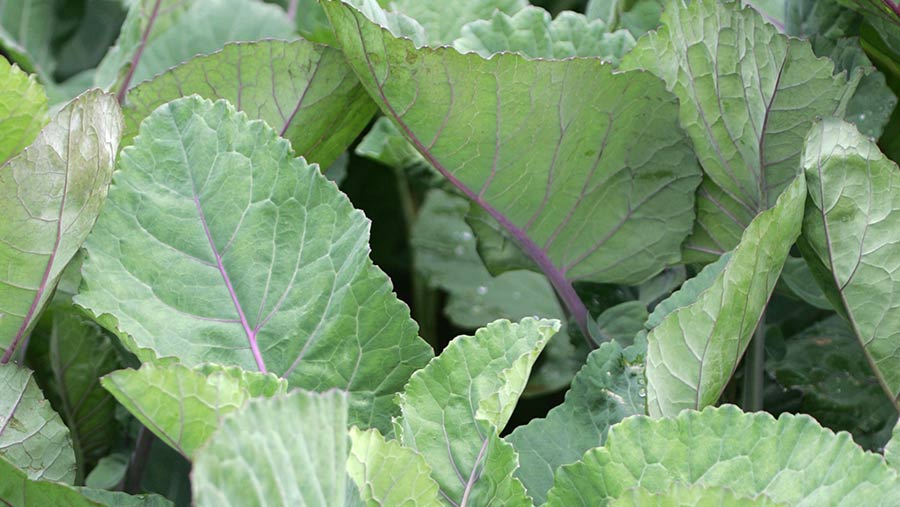 Give cattle access to a relatively small area of fresh crop daily to maximise use; strip-graze and back-fence too when it is wet. In this situation, providing a water source can be a challenge.

But Mr Jones says a drag trough, used in conjunction with 200-300m of blue polythene pipe, allows him to move the water supply with the cattle.

“This is reasonably low cost and so is the fencing. You just need one electric fence line in front of the cattle and a second as backup in case they break through,’’ he says.

For sloping fields, always feed down the hill to help prevent run-off. “You want to be rolling silage ring feeders down the hill, not up it,’’ Mr Jones points out.

As a buffer, set up an electric fence approximately 3.6m from the hedge around the entire perimeter of the field. 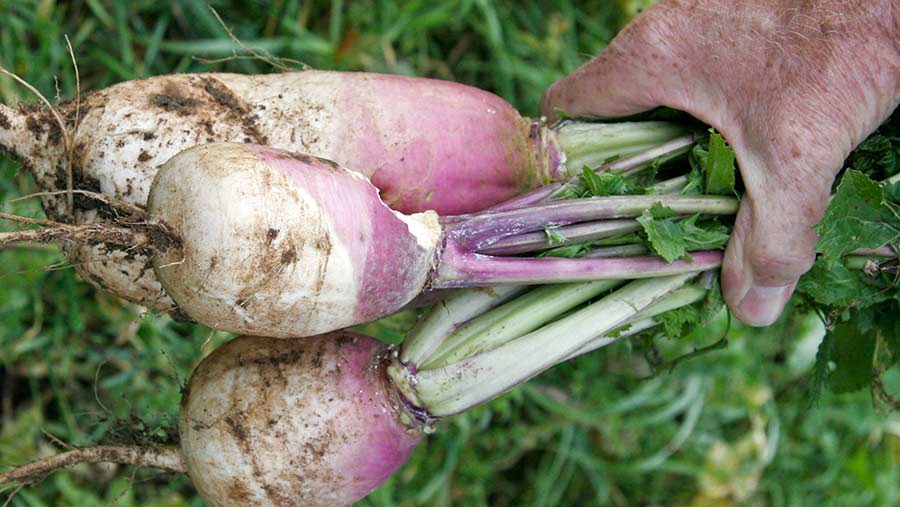 For kale and swedes, performance is generally lower – expect dairy heifers to grow at 0.4-0.6kg/day.

Land will need ploughing in the spring and it may also be necessary to subsoil, but Mr Jones says it is rare for compaction to go further than the plough layer.

Livestock are removed from grassland in late summer to allow a wedge of grass to build up, to feed in the late autumn and early winter.

Growth in the period between fields being set aside and grazed can be 1-2t DM/ha.

Deferred grazing can work well as a way of extending the grazing into late autumn and early winter.

It can be used for cattle that have lower feed requirements, such as spring-calving beef and dairy herds, but it needs careful monitoring.

Close fields earmarked for winter grazing in August or September. Make sure they are well grazed to remove the risk of dead material being present in the sward when you turn in cattle later in the year.

The longer the field is shut up before grazing, the more dead material that will build as a result of leaves dying away. Therefore, a balance needs to be struck between shutting-up date and yield.

“The covers need to be clean, so you stockpile green leaf and not poorly used grass from earlier in the season.

“If the leys are quite clean when they are shut up, they will be high quality, so you can reduce the allocation. This helps with rationing.’’

If grass quantity needs to be boosted and there is enough moisture and ground conditions are good, an application of nitrogen – about 30kg/ha – could be applied in August. Expect a response rate of about 10kg DM to every 1kg N.

Block or strip-graze in the autumn/winter. The decision on when to graze depends on whether the requirement is for quality or quantity – graze earlier for higher-quality grass at the expense of yield or later if yield is the main consideration.

A layer of woodchip sits on top of an impermeable subsoil or lining which allows effluent to be collected. 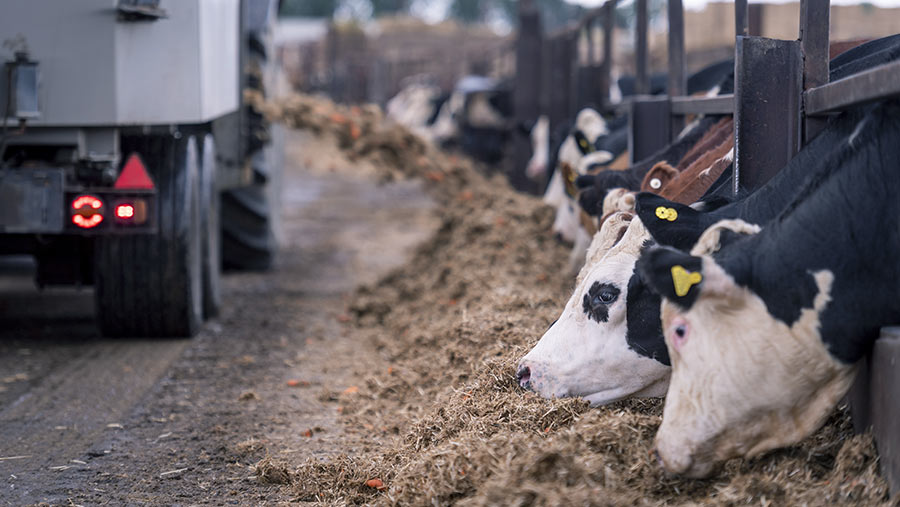 These unroofed, outside enclosures allow fields to be destocked over the winter without the high capital cost of buildings, but environmental risks must be considered at all stages of design, construction and operation.

They are suitable for heifers, dry cows and lactating animals where they also have access to daytime grazing. Pads are also used successfully for calving.