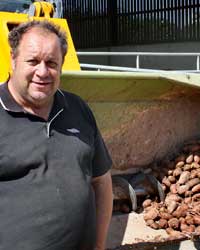 Growing on store cattle is a marginal business at the best of times, especially when it involves pumping tonnes of cereal-based feed into animals to bring them up to the required weight.

But a Kent producer has found a way of making it a whole lot more profitable – by feeding waste vegetables and beet.

Richard Vant farms in partnership with his cousin Robert close to Ashford in Kent. While the total acreage extends to some 280ha (700 acres), much of that is rented pasture spread throughout the marshes and chalk downland of east Kent.

Because this extensive grazing doesn’t tend to be the most productive land, there is a heavy reliance on other forages to get cattle up to the target weight of 400-450kg for sale.

“Back in the distant past, we used to take animals right through to finishing weight, but the poor quality pasture meant that a lot of extra feed was required to do this,” explains Richard.

“Now we buy in weaned heifers and steers at six-seven months of age and sell them on a year or so later as heavy stores.”

The young animals are over-wintered in sheds at Riggshill Farm and fed a mix of home-grown haylage and waste potatoes, parsnips or sugar beet. Mostly sourced from East Anglia, these usually cost the farm between £20 and £25 per tonne.

“We’re after the cheapest possible source of energy that will grow the animals on at a good rate, but won’t push them over-fat,” says Richard.

“Using waste spuds and parsnips I can generally over-winter each animal for £40-£50/head.”

But key to this system has been a simple but critical piece of kit – a feed-out bucket capable of chopping and pulping roots.

Four years ago, the Vants were running a BOM auger bucket which had a grid positioned at the end of its feed-out auger to chop roots as they were discharged. Simple as this was, it had a tendency to block whenever the inevitable stone got into the mix.

Understandably, unblocking it quickly became something of a chore and Richard started to look out for something more suitable.

“I found the solution in the back pages of Farmers Weekly – a company called KW Farm Services were advertising a feeder/chopper bucket,” he recalls.

“The design seemed right. With a pair of spring-loaded rollers at the discharge spout any soft vegetable matter gets pulped but stones just pass through.”

Designed like many other such buckets, a single hydraulically-driven auger runs in the base across its full width. This propels material to the left hand outlet where it passes through two hefty steel rollers driven by a duplex chain coupled to the auger itself. “It’s beautifully simple and in four years all we’ve had to do is change one bearing.

“To begin with we had an issue with roots spilling out as they began to shift to one side, but KW provided us with some pre-cut steel spill-over plates and we just welded them on.”

Throughout the year the bucket is used for a range of other tasks. Hoggets over-wintered on stubble-turnips get topped up with sugar-beet as food becomes scarce towards the back-end of the winter as do the ewes prior to lambing.

Then when it’s drilling time the spring pressure on the rollers is released and the bucket is employed to load the farm’s drill with beans.

In terms of the bucket’s effectiveness in doing its core job, Richard reckons it’s has paid for itself time and time again.

“It tends to pulp roots more than chop them and the cattle love it – we can definitely get more feed into them.

“More importantly, since we’ve had it we haven’t lost a single animal to choking. When we fed spuds whole we would lose at least one steer every six months – in that way the bucket paid for itself straight away.”