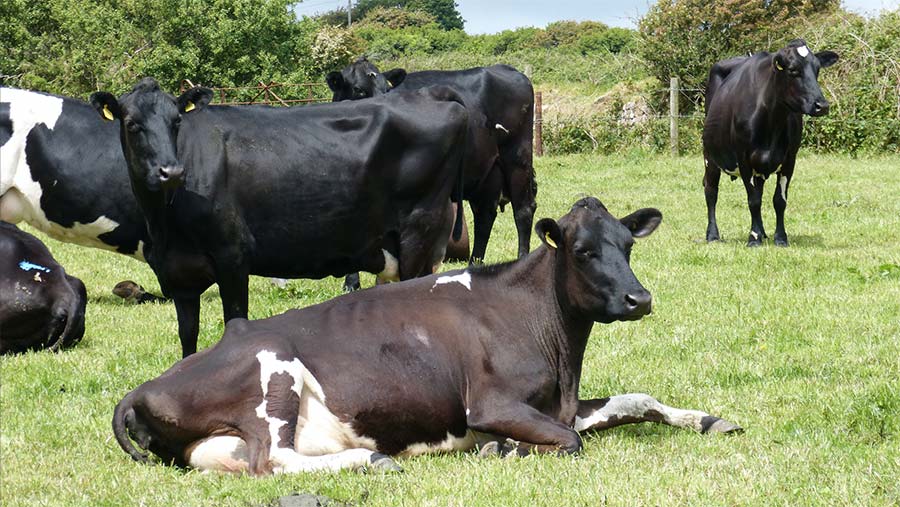 Strict control of parlour feeding and a tight autumn-calving block saw a Cornish dairy through the 2018 drought with a total purchased feed cost of 6.52p/litre.

Because peak lactation happens in December, when cows are housed, a lot of the pressure was taken off Paul Richards and the team at Splattenridden Farm, near Hayle, when the drought hit Cornwall last year.

Mr Richards accepts the farm was very fortunate to be in such a position, because despite only having 20mm of rainfall in May and June, the autumn-block system makes the unit inherently resilient to low summer rainfall.

See also: How Hampshire dairy has climbed to top 5 for milk production

Cows calve outside in a strict 12-week calving block from mid-August, and are dried off from late June each year.

This meant that when fields became scorched and grass growth dropped in June, the cows were ready to dry off.

“We were lucky, as we had a lot of baled silage in stock grown the previous year,” explains Mr Richards.

“The milking herd is down to 16 litres a day anyway in June. Cows are dried off from June, but the heifers needed feeding to ensure they kept growing.”

Furthermore, rain in late July and August and a very good autumn helped the farm replenish silage stocks with third- and fourth-cut, which Mr Richards acknowledges parts of the country weren’t fortunate enough to get.

This was critical to feed cows through early winter, when they typically hit peak daily yields of 26 litres. 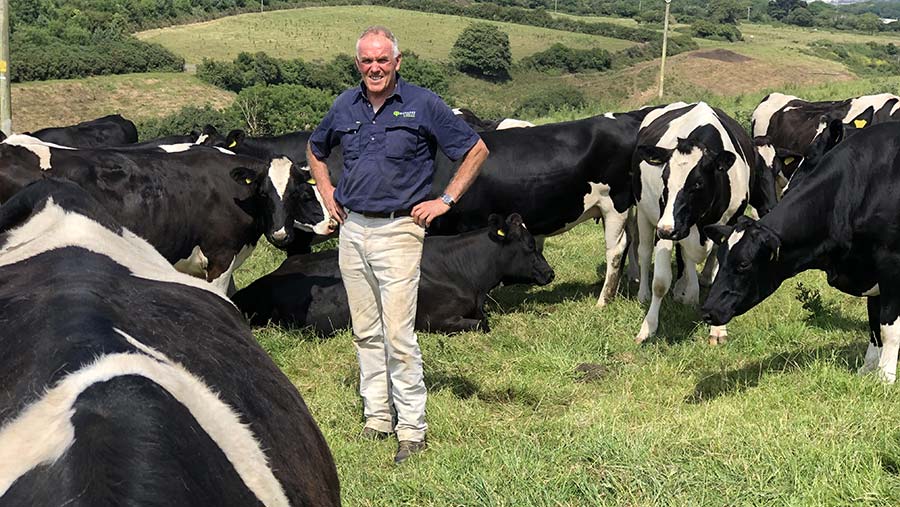 Silage was bought as a precaution when grass growth slowed to 3-4kg DM/ha/day in June.

With the dairy herd run alongside a vegetable and arable business, Mr Richards was able to buy 6ha of spring barley from the arable business, costing just over £9,000 – including wholecropping contractor costs.

The barley was fed to the cows through the following winter, lifting the feed cost by 0.53p/litre.

As conditions got very dry into June, the 80 in-calf heifers on the farm were kept in a 7ha field and fed four to five bales in ring feeders each day.

This opened up more of the grazing platform to the milking herd until July and August, when rains eventually came.

The team stuck to a strict parlour feeding budget of a maximum of 6kg/day at peak lactation, 2kg/day in late lactation and an annual budget of 1.2t of cake a cow.

A small number of cows were dried off a week or two early at the height of the drought, when daily grass growth slumped to 3kg DM/ha/day.

This was to avoid transition problems caused by too much condition coming off the cows, explains Mr Richards.

Each year, the farm dries cows off on crops of long, stemmy grass, which acted as a great dry cow feed last year.

Then, as normal, magnesium buckets were given to the cows in August at calving and magnesium chloride flakes were added to water troughs. Last year there was one milk fever case out of 300 cows.

Factors that helped control costs during the drought

Splattenridden operates a 12-week calving block, meaning cows are at a similar stage of lactation and gestation.

This simplified cow management during the drought, making it easier to monitor individual cow and herd body condition.

A future goal is to shorten the calving block further to 10 or possibly nine weeks, but some improvements will need to be made to fertility figures before that happens, explains Mr Richards.

Artificial insemination work is done by the Splattenridden team through a tail-painting programme after synchronisation starts in November, when cows are usually housed.

Following the drought, 80% of cows calved in six weeks, which will hopefully be increased to 90%.

Timely rains through late summer and a mild autumn allowed the farm to restock silage clamps for the farm’s self-feed system.

Contractors harvested and clamped the crop within 24 hours to get the cows through the critical winter period.

Over the past 12 years, rather than pushing for milk production, the team has tried to look at the overall costs of the business and make use of the Cornish climate to produce milk cost-effectively.

By using a self-feed silage system through the winter, machinery repair and depreciation costs are controlled (0.66p/litre and 0.74p/litre, respectively), resulting in 13% (4.2p/litre) net profit in 2018-19 without Basic Payment Scheme subsidies.

This winter, dry matter intakes were increased, and pressure was taken off the clamp face by adding 12-15 blocks of silage in the passage each day and feeding baled silage in three ring feeders in the yard.

The farm’s pasture growth is measured weekly to inform on-off grazing strategies and day-time grazing around the shoulders of the season, which controls costs by maintaining pasture quality through the year.

Winters are typically 80-90 days long, but this year the cows were out full time after only 60 days, which provided a welcome break from the winter routine after the stressful drought year.