A combination of persistence, innovation and working with nature has helped one organic dairy farmer achieve averages of 8,000 litres a cow from an almost entirely home-grown ration.

John Pitts had a long-held interest in environmental issues and switched to organic production 20 years ago when he saw a market opportunity to produce food for consumers who were not solely focused on price.

But he was also convinced that the true path to sustainability was through profitability. 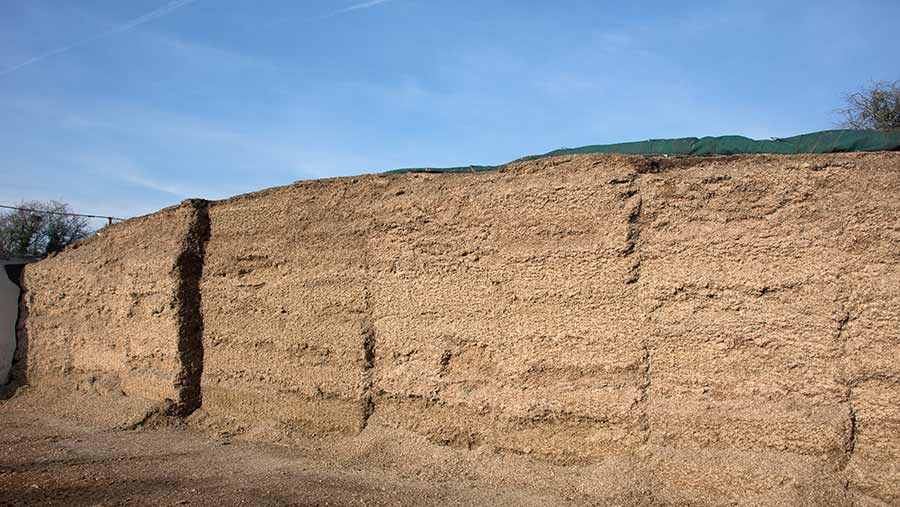 “If farms are not profitable they will go out of business so they will never be sustainable,” Mr Pitts says.

“Just like all successful businesses, we have to optimise our output and control our costs.”

One of the big costs for organic farms is feed. To meet Organic Farmers and Growers’ (OF&G) standards, feed must be grown organically.

That has driven the team at Woodhorn Farm, Chichester, West Sussex to produce as much home-grown forage as possible.

The farm is now 94% self-sufficient in feed and grows:

As well as being used for silage, the maize grain is crimped along with barley by a contractor and any surplus is sold off. 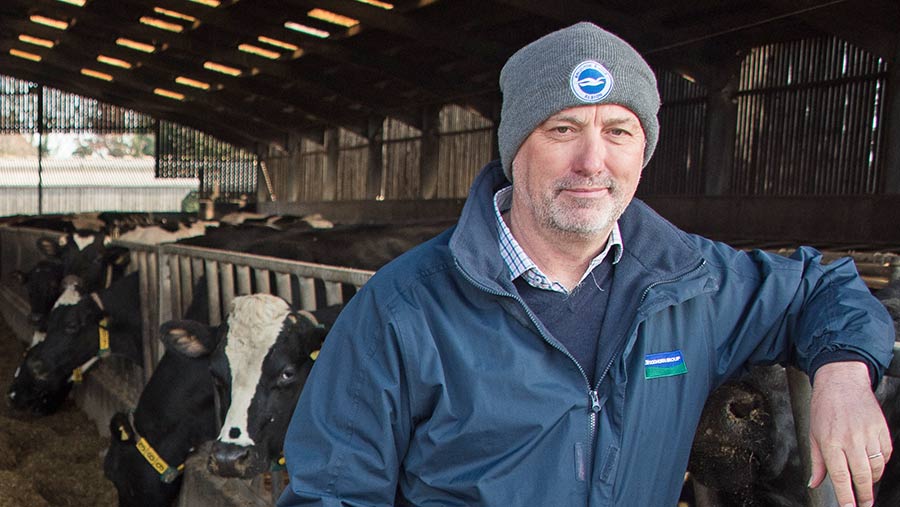 The remaining 6% of the feed ration is protein and is bought in as sunflower and soya meal. Sources of high-protein feed are limited because little is grown organically and the farm pays £550/t for imported soya.

“We grew beans over a 10-year period to try to cut our protein costs but insurmountable weed and disease challenges meant yields fell below 0.25t/acre,” Mr Pitts says.

“Even though we persevered with the beans they became unviable and were axed from the rotation.”

The farm has had a similar long-term struggle with maize, but with a very different outcome.

Most organic farmers avoid it because organic maize seed is untreated, leaving it vulnerable to rooks, while the sparsity of the young crop and the late spring sowing date mean weeds have the upper hand.

However, the potential benefits of the extra milk yield possible, coupled with its value as a break crop and good disease resistance, has seen maize established on 73ha at the farm.

Maize yields have been variable, ranging from a total crop loss in the early years to a grain yield of 10t/ha. The crop now makes a huge contribution to milk yields through silage and crimped grain.

Persistence with organic maize is paying off in milk production

But it has been a challenge.

Rooks can quickly clear a field of untreated seed and the only way to keep them from an organic crop is to use scarers.

The solution has been to pay a bird-scaring team which patrols in a van continuously from 5am to 10pm, from immediately after drilling up to the three-four leaf stage.

The rook patrol costs equate to £60/ha but it has proved effective.

Once the crop begins to grow, the battle with weeds – particularly fat hen – takes over in the wide spaces between the small maize plants.

To tackle the threat, the farm uses a high-tech innovation in the form of a Garford tractor-mounted hoe.

The inter-row hoe is camera-guided and linked to Robocrop computer software in the cab. It recognises the difference between crop lines and spaces and can move its tines left or right to take out the weeds.

A further development has been to use the system in conjunction with GPS data.

“The maize is sown using GPS guidance and that data is uploaded into the hoe’s computer to take out more weeds with less crop damage,” Mr Pitts explains.

Weeds are also a challenge in the other forage crops and swards, and another machinery mounted innovation is used to keep charlock down.

“We use a weed surfer mounted just above the crop height on the front linkage,” he says.

A weed surfer keeps charlock down

“This mows the charlock, preventing it from overshadowing growing crops and allowing them to compete.”

In the silage leys, docks are the big challenge.

“All we can do is take out the docks at the cultivation phase and bring them to the surface to dry out,” Mr Pitts says.

For the red clover and ryegrass silage leys that means an opportunity during the arable phase of the rotation. The red clover mix is autumn sown or undersown in the spring as a fertility break in the arable rotation.

These leys produce three to four cuts a year, yielding slightly less than the previously used Italian ryegrass, but they have proved to be more persistent.

White clover grazing leys are down for about four to five years before returning to arable.

Both clover types have shown good drought resistance and their nitrogen-fixing properties means they are an essential source of fertility in the overall rotation.

The basic principle is to take up and retain soil nitrogen following a crop to prevent it leaching. Westerwold ryegrass is used to produce an early cut of silage in April which fits in ahead of maize drilling in May.

Otherwise mustard is an extremely effective fast-growing cover crop that is ploughed under before spring cereals are sown in February/March.

The rotation helps to keep disease levels in the crops low but the lack of nitrogen input is also a factor, Mr Pitts says.

Nitrogen pushes green growth but stresses the cell wall, leaving it weaker and more vulnerable to disease, he explains.

This, combined with the use of varieties selected for their resistance to disease, is all part of the holistic approach that has to be taken for an organic setup to work, he adds.

The same holistic approach is applied with the cattle herd. The Swedish Red cross New Zealand Friesians have been chosen both for their high yield capability and traits for disease resistance.

For lactating cows, the herd reached a major milestone last year with antibiotic use cut to zero.

The success followed a three-year drive to reduce antibiotic use which reviewed the farm’s infrastructure and tackled stress points in the system.

That included installing ventilation to treat a low-level but persistent problem with pneumonia in calves and a switch to sand in the cow cubicles.

“The sand is inert so doesn’t harbour disease and has reduced mastitis levels compared with straw,” Mr Potts says.

“Resolving these issues means the cattle are less stressed and that means they are better able to fight off disease and more productive.”

But the farm is not resting on its achievements and Mr Potts says: “We will continue to push towards 100% feed self-sufficiency and zero antibiotics right across the farm.

“Keeping our imported inputs down will help us to be more resilient, whatever the future holds.”