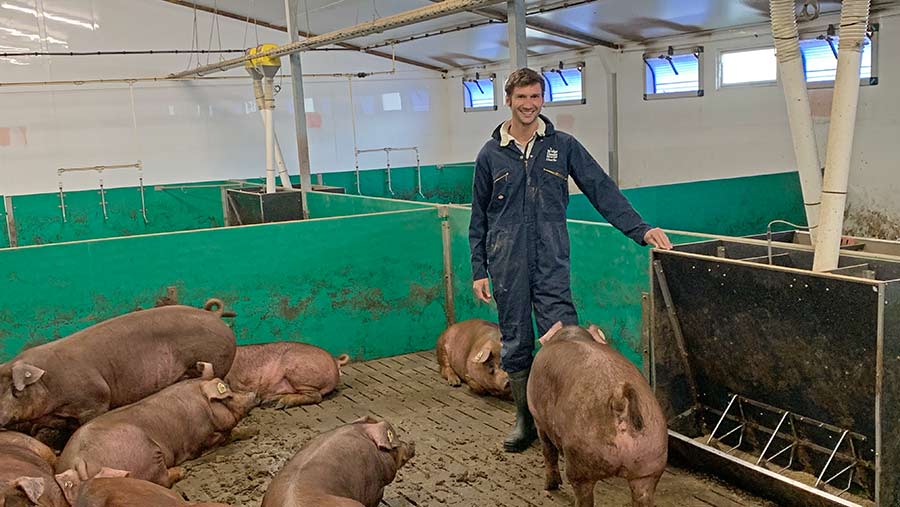 Vet and pig farmer Charlie Thompson took the decision to install a phase feeding system in 2018, when the farm (which runs a nucleus breeding herd) invested in new grower and finisher accommodation for 4,000 pigs.

The system encompasses 144 pens, which can all be individually managed using the system.

At the same time, the farm imported a new breeding herd of 650 gilts and boars from Canada, following a depopulation.

The Genesus genetics they brought to the farm are renowned for having good growth rates, so the business wanted a feeding system that would allow them to meet their genetic potential.

Because he operates a nucleus breeding herd, Mr Thompson also wanted a feed system that would allow him to analyse data accurately, so he could see which pigs and diets were performing the best, to help influence his management decisions.

He chose a phase feeding system from Collinson that allows the amounts of each feed ingredient that are present in the mix to be weighed out and gradually adjusted over time for each individual pen. 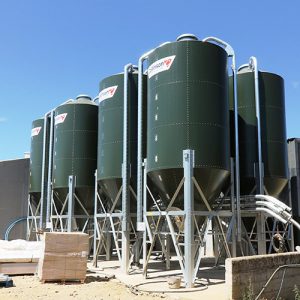 This means diets in individual pens can be tweaked to make sure the pigs’ nutritional requirements are met at each stage in their growth cycle.

This allows the pig gut to adapt slowly to the diet and creates a smoother transition.

The system can be monitored and controlled remotely on a phone.

Mr Thompson was fortunate to be able to secure a Leader grant for the complete system, which included feed storage silos and conveyors, bringing the costs in line with a standard feed system of about £90,000.

At weaning, piglets are split into groups according to sex, size and breed (either Duroc or Yorkshire). Piglets enter the grower building and start on the phase feeding system at 20kg.

They are housed in pens of about 30 pigs on plastic slats and move across to the finisher building at 60kg, where they are housed in the same groups on concrete slats until they leave the farm at 120kg.

Group changes are minimised throughout the system, with some pigs remaining in stable groups from weaning to 120kg.

Each pen is weighed on entering the growing accommodation. A growth curve is then set, depending on the sex, size and breed of the animal and a diet is formulated for each pen.

This means any variations in weights can be easily dealt with as a pen – 15kg pigs can be set up next door to 25kg pigs and be on a completely different diet.

Throughout the growing and finishing phase, a selection of pens are weighed every week using a weighbridge to check their performance and to make any dietary adjustments.

This also allows Mr Thompson to work out their feed conversion efficiency.

The system has outperformed Mr Thompson’s expectations and the information has opened up new possibilities in terms of managing the performance and efficiencies of the farm’s most expensive input – feed.

Mr Thompson says: “Before phase feeding, we might have lost a few days’ growth when moving from one diet to another, but we don’t get that now.”

Mr Thompson adds that it wouldn’t be accurate to compare growth rate figures now with figures prior to installing the phase system, because of the change in genetics. However, he says he is definitely saving money on feed.

“The big saving in feed is coming by not feeding as much of the amino acid lysine to gilts and finishers. Lysine is vital for the growth of pigs, but research has found that gilts can’t use as much lysine as boars.

“As pigs get older, they also need less lysine, so we use less of the amino acid in the finisher diets than in the grower diets.” 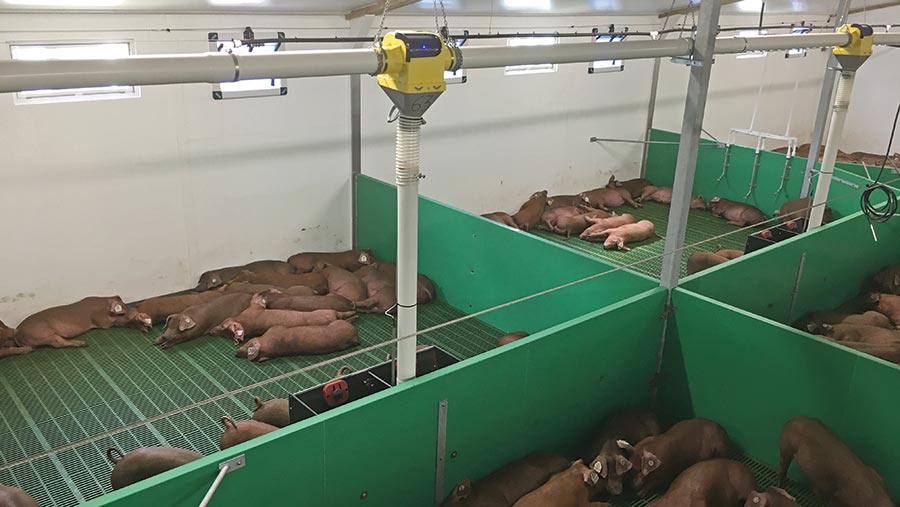 By the time gilts weigh about 90kg they are on a complete finisher diet which contains 6.3g/kg of Standardised Ileal Digestible (SID) lysine. In comparison, the boars are on a 50:50 grower/finisher ration until they finish.

This diet has a SID lysine content of 8.7g/kg. This alone is saving Mr Thompson £60/t.

“If we fed the gilts the higher-spec diet, they wouldn’t be growing any faster and would lay down more fat, so it would just be a waste of money,” he explains.

Mr Thompson also believes the phase feeding system is influencing the behaviour of the pigs: problems such as tail biting are rare.

“All the pigs have entire tails and we don’t have a tail biting problem currently.”

He says this is probably down to multiple factors, including: the genetics, with the Genesus pigs (particularly the Durocs) being very placid and calm; excellent management by the team, with any changes reacted to as promptly as possible; and good nutrition, because there are no shocks to the pigs’ diet as the feed is changed so gradually.

He adds: “Also, as lysine levels change continuously, there are never any times when pigs are underfed this element of the diet. This is essential, as Lysine has been linked to vices in pigs.”

What farms would benefit from a phase feeding system?

Farmers who are growing and finishing animals on a large scale and are interested in using data to fine-tune diets would benefit from a phase feeding system, says Pete Eastwood, pig specialist at manufacturer Collinson.

“If anyone wants to tailor diets for a specific type, weight or sex of pig, then this system can help.

“Cost-wise there are big savings as a result of not underfeeding or overfeeding pigs – so you can save on feed costs and pigs can also grow at their optimum rate.”

Mr Eastwood estimates the payback on such a system would be about 4-5 years, with the cost of a pig place starting at about £30, depending on the system configuration and building.

Mr Thompson made sure the phase feeding system consisted of straight pipelines with valves to transfer lines, rather than any curved pipelines. This is to reduce wear and improve longevity of the system.