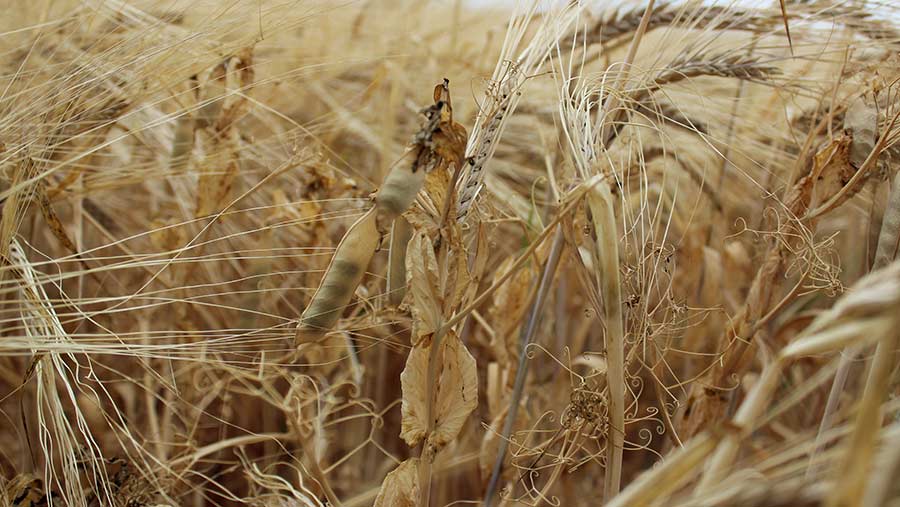 The principle of allelopathy is certain plants release molecules (called allelochemicals) which affect the germination, growth and survival of other plants.

By using crop rotation alongside allelopathic weed control he is successfully suppressing weeds without using chemicals – a stipulation of his organic milk contract.

It means he is now managing to grow 93% of the herd’s feed on farm.

Like every organic milk producer, Mr Saunders had to find a method of non-chemical weed control in the crops he grows for his dairy cows.

He wanted to be as self-sufficient as possible, but when passers-by started to view his “poppy field” as a local landmark, he knew he needed a better approach to weed control if the crops he grew were to meet the expanding needs of his organic dairy herd.

As the fourth generation at Step Farm, near Faringdon – where the home farm’s 243ha are a National Trust tenancy and a total of 648ha is farmed through a combination of tenancies and ownership – Mr Saunders has a depth of experience of conventional farming.

See also: How a new entrant has set up his own dairy after 17 years of hard work

What prompted the move to organic?

It wasn’t until 1982 he started looking into farming without chemicals in a small way, prompted by his father, Pat, who “has a knack of asking whether we are doing it the best way”.

“At that time, we were producing about 6t/ha of wheat on our heavy land, using all the sprays and fertilisers, and we were not really making any money,” he recalls.

“I had just left Cirencester and could not understand how you could farm without chemicals, as the system of the day was ultimate production rather than optimum production,” he says. “Organic farming just wasn’t really talked about.”

However, a succession of events started to prey on the family’s minds, not least a scandal involving lead contamination in animal feed which temporarily shut down the farm, and concerns about spray drifting on to neighbours’ allotments.

“It was this that made us think we needed to find an alternative, financially sustainable method of farming,” he says.

The initial response was to stop using spray and fertiliser on a small acreage of the farm, “just to see what happened”.

“Yields dropped by about 1t/acre [2.47t/ha] which, to our surprise, equated almost exactly to the variable costs of sprays and fertilisers,” he says.

This meant the gross margin for the crops was almost identical under both systems, and it gave the family confidence to convert from the farm’s conventional wheat and grass rotation to an organic system.

The system continued to be developed and an organic milk contract offered by Marks & Spencer in 1989 was the final catalyst for the whole farm to be signed off as organic.

“By that time I had complete belief in the organic principles but it has to be financially as well as ecologically sustainable,” he says.

Once the organic milk contract – later succeeded by a supply deal with the Organic Milk Suppliers Cooperative (Omsco) – was secured, a concerted effort was made to feed the dairy herd with the farm’s own crops.

Over the intervening years, the herd has grown to about 400 head, although it has periodically been hit by significant compulsory culling due to TB, most recently in February 2018.

The cropping has now been developed to mostly revolve around a mixture of barley (or sometimes oats) with peas. The combination is sown at 247kg/ha in a ratio of 65:35, peas to cereal by weight, with the aim of producing a standing crop with a pea to cereal ratio of 20:80.

Often described as a “ration-ready” combination, the cereals provide the starch for the ration and the peas provide some of the protein and also fix nitrogen while growing.

A further bonus has been the flexibility of this mixture, which can be harvested as wholecrop silage or with a combine, at a moisture content of about 25%, at which point the crop can be preserved by crimping.

With either the crimp or wholecrop being used in the herd’s total mixed ration alongside grass clover silage, only organic soya and maize now need to be bought in for the farm’s dairy cow ration.

This means 93% of the dairy herd’s feed is home-grown (on a DM basis) and roughly 200t of concentrate are bought each year for the 400-head, 6,300-litre herd of mixed breed cows.

Keeping on top of weed control is integral to the continued success of this system, and the Saunders family want no repeat of the year in which their wheat field below Faringdon Folly was a carpet of crimson.

The main method of weed control is through crop rotation, with four-year grass leys followed by the mixed crop of barley and peas.

“The peas and barley also make a dense crop which shades out broad-leaved weeds quite well,” explains Mr Saunders. “Of course, they don’t stay away all of the time, but we always plough up our grassland and power harrow before drilling the cereals.”

However, he has also turned his attention to allelopathic weed control, which appears to have overcome the poppy problem in Folly Field.

The principle of allelopathy is certain plants release molecules (called allelochemicals) which affect the germination, growth and survival of other plants, whether positively or negatively.

“Many farmers will be broadly aware of this principle – for example, you tend not to get redshank or fat-hen in wheat, but you would get it in maize or beans,” he says. “And what I’d read about allelopathic weed suppression led me to believe poppies would not grow with oats.”

His strategy was to grow lucerne after the weed-infested wheat, which successfully suppressed the poppies in the light, sandy soil due to regular cutting. He then used oat and peas as a break from the lucerne, and has so far found the poppies have not returned.

“This year we combined the pea and oat mixture for crimping in late July and were reasonably pleased with the outcome,” he says. “The sample was nice and clean, although at 3t/ha was lighter than I would have liked, but this was not surprising on sand, and after two months with no rain.”

He will continue to use oats and peas as a break from lucerne on this particular field, although he will stick with barley elsewhere on the farm for its better feed value and yields.

“But they say poppies spend one year seeding and you will spend 40 years weeding, so we know they are still there and waiting to grow,” he says.

“People still ask me when are we going to grow the poppies again, but that’s certainly not my plan for a long time.”