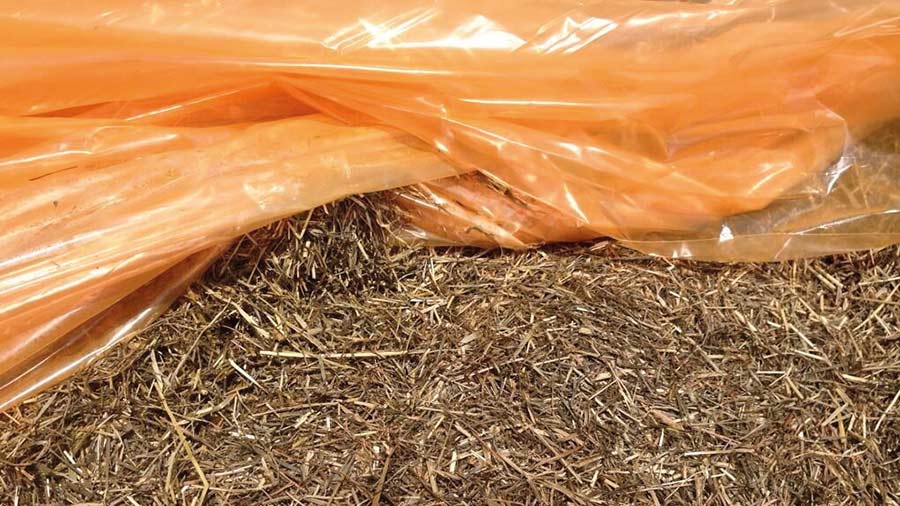 Opting for high-oxygen barrier (HOB) films instead of black plastic sheets has been shown to reduce silage clamp losses from 15% to 7%.

This could go some way towards protecting farmers against rising feed costs.

HOB sheets are thin, polymer films that cling to the top of the clamp, with the aim of eliminating air pockets.

They are made using less plastic than conventional black sheets – which are often applied in a double layer – and can be used with just an ultraviolet (UV) net on top, plus weighting.

HOB sheets cling to the top of the clamp in a similar way to conventional “cling film” sheets, but do not require an additional black plastic layer on top.

Tim Brewer of silage protection specialist Silostop explains: “A proper high-oxygen barrier will have an oxygen transmission rate of less than 5cu cm/sq m of film. This means almost no air can get into the clamp in use.

“With typical black silage plastic this [rate] is more like 300cu cm/sq m.”

“These thin, transparent polyethylene [cling] films can appear to give a reasonable result, with a visual reduction in top layer spoilage. But their extremely high oxygen transmission rate results in high dry matter losses,” he says.

Trial work at the French National Institute for Agricultural Research (Inra) has shown significant reductions in silage waste from 15% to 7% when switching from black sheets to HOB films. 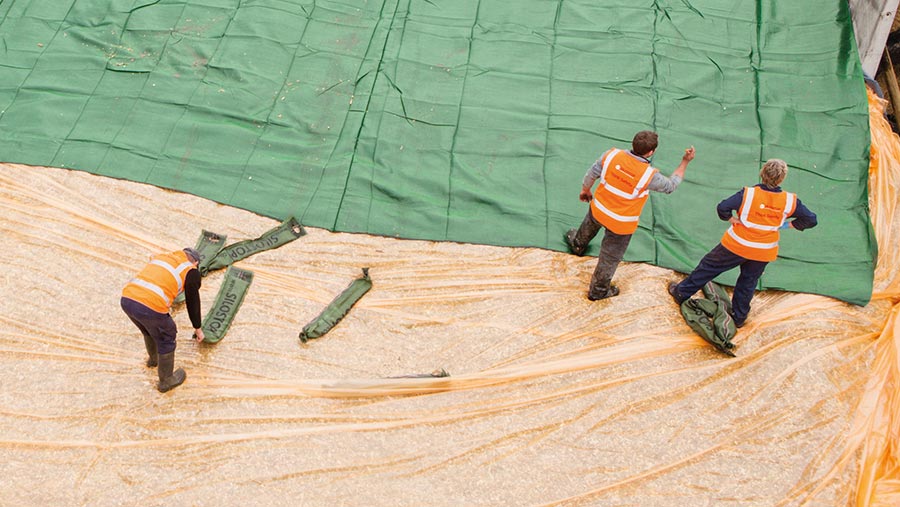 Moving to HOB film could also help farmers lower their environmental impact and plastic use.

For example, covering forage maize with a single layer of HOB film has been shown to give large reductions in primary energy and greenhouse gases compared with covering clamps using two layers of standard, thicker film (see below).

Tips for making the most of HOB film

Using a high-oxygen barrier (HOB) film has eliminated top waste on the maize silage clamp, made sheeting up “a breeze” and cut plastic use in half at Mark Humphry’s dairy farm.

“I’d say we’re down to zero waste compared with an inch of waste on the top [previously]. It’s not just the quantity but the hassle factor of taking off that contaminated feed,” says Mr Humphry.

Two years ago, he decided to try using a HOB film and anti-UV cover instead of “cling film”, conventional black plastic sheet and green netting.

Although initially sceptical that such a light sheet would be strong enough to avoid tearing and do the job without an additional black sheet, the system has proved its worth.

The maize clamp has side sheets, an HOB film, UV cover and tyre walls or gravel bags on the seams in a box pattern across the clamp.

Mr Humphry found using less plastic sped up the sheeting process and meant the team were more likely to sheet up at night after a long day of silage-making.

He estimates silage losses on the previous system equated to about 1% or 7.5t on the 750t maize clamp.

As the spoiled silage had to be taken off and disposed of, and good silage would also have been removed in the process, he believes the total waste could have been two or three times that.

The new system uses about 300kg of plastic, about half that used on the grass silage clamps, where the old system is still used.

With recycling costs of £220/t last year and environmental pressures to reduce plastic use, the plan is to move the grass clamps over to the same system as the green nets wear out and need replacing.