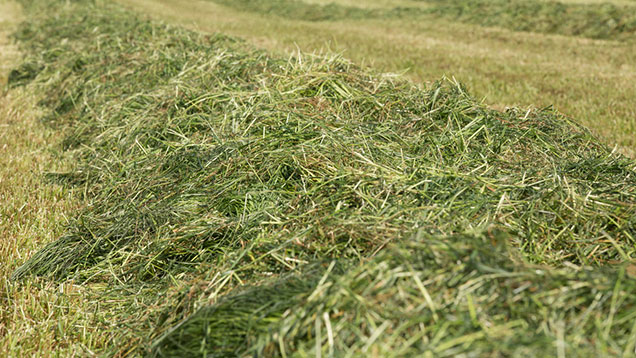 Although silage results have been variable, 47% of silages analysed at more than 11ME, compared with just 21% last year, explained Trouw Nutrition ruminant manager Adam Clay at last week’s Livestock Event.

“Only 23% of forages are less than 10.5ME compared to 54% last year. This suggests more farmers will have better-quality feed.

“The results should equate to a minimum of 0.4 litre additional milk yield a cow a day, based on DM intakes of 10kg,” he said.

“This means cows will be more enthusiastic about eating larger quantities of silage, which will be good for diet formulation,” he added.

If farmers have increased rapidly fermenting carbs with high sugars and low NDF, Mr Clay’s advice was to choose a complementary feed other than rolled wheat or barley.

“Treated wheat or barley (crimped or caustic) buffers the carbs, reduces rumen fermentation and increases use in the hind gut.”

If these are not an option, a digestible source of fibre, such as soya hulls, should be added to the diet, he said.

“Sugar beet pulp has higher rapidly fermenting carbs than soya, but is good for rumen health as it’s higher in fibre.”

However, he warned farmers not to delay second cut to try to fill the clamp up, but to go for more smaller cuts throughout the season.

“This may mean an increase in contractor charges, but it will also increase the silage quality, DM intake and energy density.”