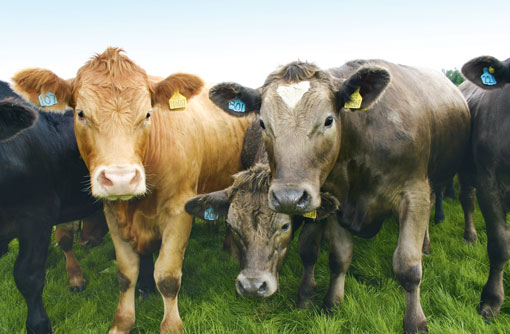 A move towards rotational grazing and breeding an animal that thrives on forage has paid dividends for a Scottish farmer who has returned to the mindset of producers from times gone by when grass was the staple feed for livestock.

The 627ha farm is one of two farms involved in Quality Meat Scotland’s (QMS) Grassland Development Farm project, and a move towards rotational grazing has helped reduce costs and increase the profitability of the farm’s beef enterprise.

Why did the Greenshields decide to focus on grass?

“Back in 2008, the price of fertiliser and feed had risen dramatically but the price of lamb and beef had not gone up, and I had also been diagnosed with muscular dystrophy,” says Mr Greenshields.

“I was feeling under pressure and I couldn’t see how the sums would add up. So that year I went to the Royal Highland Show and spoke to some consultants and I also went on a trip to Ireland to find out how farmers over there were making more from grass.”

The decision was made to try and make more from grassland, leading to the farm becoming involved in the QMS research project, which was facilitated by SAC beef and sheep specialist Rhidian Jones.

“On a whole the industry has neglected grassland for far too long, maybe because it was not really in vogue and fertiliser was fairly cheap,” says Mr Jones. 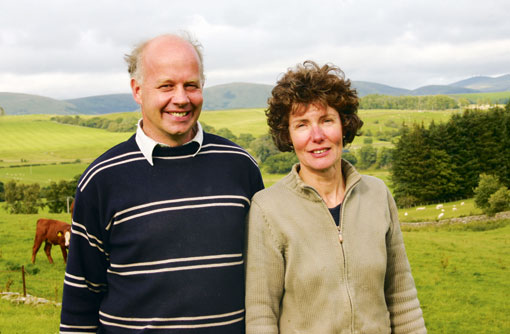 Why have they chosen Stabilisers?

The desire to make more from grass goes hand in hand with the Greenshields’ drive to create a pure pedigree Stabiliser herd.

Ten years ago all the cows were either Angus or Limousins out of the dairy herd, put to Charolais bulls. But in 2000, for the very first time, I hired one Stabiliser bull and then in 2006 we sold the last Charolais bull, says Mr Greenshields.

“The theory and science behind Stabilisers is just right. They were bred to survive from forage, have a quiet nature and high fertility; this is everything we want from a suckler cow,” he adds.

The Greenshields’ main fertility aim is to improve the EBVs of the whole herd by only keeping the superior heifers; any found not in-calf after running with the bull are fattened and sold.

The females are given nine weeks with the bull to get in-calf, and in the most recent breeding season only six cows were left empty out of 150, compared with three in both the previous two years.

Why rotational grazing was chosen at South Mains

Rotational grazing was seen as the best way to make more from grass at South Mains, with the view of taking advantage of cheap compensatory growth of stores in the summer.

Stores from the spring-calving herd were previously sold at 10 months old, but are now sold when they have just come off grass at 15 to 16-months-old.

“I always felt I was selling them cheap in the spring; there are not enough stabilisers around so people can’t really see their potential. But I think if you can put them onto a forage diet and allow them to grow frame, they can turn into good cattle to make some money,” says Mr Greenshields.

“And I have come to realise in the marketing of stock, you cannot change the market price you are going to get by any great degree, but if you can reduce your costs you have a far greater chance of increasing your profits.”

Monitoring growth rates is a crucial part of the Greenshields’ farming system, and the stores are weighed four times before they leave the farm: at birth, weaning, turnout and pre-sale.

And according to Mr Greenshields, it is this attention to detail with monitoring which enables him to balance costs and ascertain how much to feed during the winter to then take advantage of compensatory growth during the summer.

In fact the stores achieve a growth rate of 0.55-0.6kg a day during the winter – a figure which increases to 1kg a day on grass during the summer.

Mr Jones says: “Early on in the project it was obvious that the more weight the animals gained during the winter, the less they grew at grass. And because feeding them in the winter costs more in terms of silage, all you really need to do is keep them going at about 0.6kg a day and you will get good performance in the summer at grass.”

With regards winter feeding, the stores are weaned off their mothers when they come into winter housing and started on 2.4kg a day concentrates, which is gradually reduced to a diet without concentrates for a week or two before turnout, to prepare the rumen for digesting nothing but forage.

How does the rotational grazing system work?

The rotational grazing system at South Mains is designed around flexibility, with animals split into three groups: heifers not for the farm, big bullocks and small bullocks.

The 60ha (150-acre) area is operated as such to allow two-thirds for grazing and one-third for silage, hay and reseeding. The fields have been split into three-acre paddocks with electric fencing, using painted fence posts as a guideline of paddock size.

Mr Greenshields says: “I graze this area right down in early January before the ewes go into the shed for lambing. And then in early April we start putting the cattle out, but we have to prioritise what group to go first because the ground cannot take the whole lot.

“We try and put them out on a day with good weather so they get in the habit of standing in the field grazing. And we are doing it purely by keeping an eye on it; it depends on the grass and the growth rates.”

Mr Jones adds: “With this approach you really need to be flexible to change things as the season progresses, and it’s important to keep an eye on grass growth. This is particularly relevant at South Mains because there are a mixture of different fields; some have been reseeded recently and some are 20 years old.

“It’s all about being flexible and reacting to what you see; if a field gets a way from you, just move the cattle into another paddock, and use that one for round bale silage,” says Mr Greenshields.

He says the key to the system is getting the cattle around the grazing block in 21 days, which works well with three-acre paddocks if they are grazed for three days and left to rest for three weeks.

When deciding how many animals can graze on a certain block of ground, the Greenshields follow a simple grass budgeting calculation based on kg/liveweight and the assumption that stores are going to eat 2-3% of their liveweight.

“As a general rule of thumb the animals are going to eat 2.25% of their liveweight in DM, so you have to calculate how much DM the ground is going to give them – at peak season this is about 1,000kg DM/acre,” says Mr Greenshields.

Advice to other farmers

“Farmers interested in trying rotational grazing have got to be brave enough and commit themselves to a half decent area otherwise they won’t see the benefits,” he adds.

“Once you get into the system it really is the easy option and because you don’t have to carry cake out to these animals, it is cheaper.”

• Takes advantage of compensatory growth at grass in summer
• Three week cycle – three days grazing following by 18 days’ rest (for every paddock)
• Flexibility is key – if grass gets away, close up paddock for silage
• Not suited for those selling stores in spring
• Use grass budgeting to calculate animal needs and DM allowance