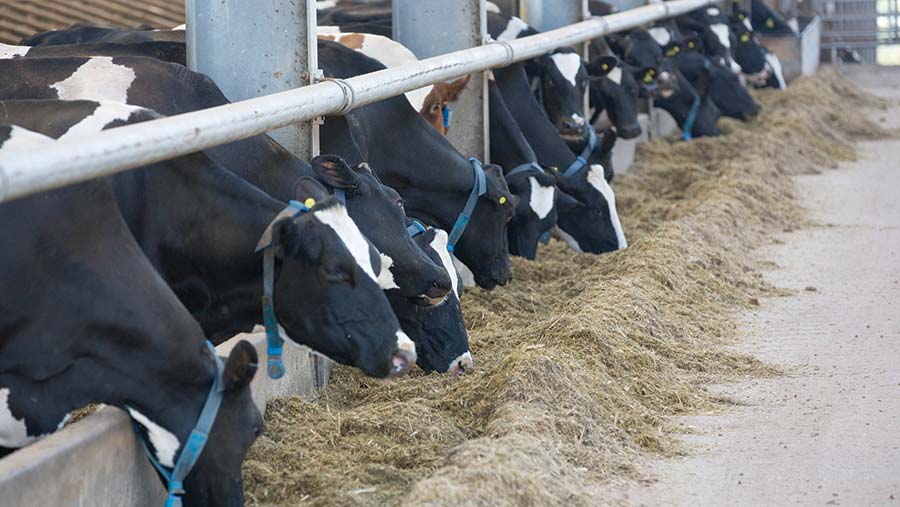 Farmers are overfeeding dairy cows protein and instead need to look at amino acids in much more detail, according to new research.

“Protein has been overfed. It has been too cheap and used as a substitute for good management,” Iwan Vaughan, head of dairy technical services at Wynnstay, told Farmers Weekly at UK Dairy Day.

“A cow does not have a protein requirement – it has an amino acid requirement,” he explained to delegates.

Therefore, he said farmers need to pay greater attention to the quality of protein being fed to cows rather than the quantity. And farmers need to know the protein quality in forage in order to formulate the rest of the ration.

Mr Vaughan, who has completed a Nuffield scholarship on increasing rumen nitrogen efficiency in UK dairy production, said cows running on a high-protein diet are usually thinner, as it takes a massive amount of energy to maintain that cow.

“As a dairy farmer and also working within the industry, I was getting frustrated with the high-protein diets seen on farm,” he said.

Emissions and the link to protein

With nitrogen a key component of amino acids and protein, there is also a strong connection between excess protein consumption and environmental effects through ammonia (NH3) emissions.

Pressure is mounting on farmers to cut emissions and improve efficiently. Therefore Mr Vaughan said a different approach is needed that focus on metabolisable protein (MP) instead.

“In terms of environmental sustainability, the lower the nitrogen intake, the better,” said Mr Vaughan.

This approach to protein has been built into Wynnstay’s new feeding programme called AminoMatch.

MP is the protein that is available for digestion and is a measure of total amino acids available to the cow.

The amount of MP a cow requires is dependant on stage of lactation, milk yield, milk quality and age/weight/growth.

For example, a transition cow for the three weeks pre-calving would require 1,300g of MP to support the calf growth, mammogenosis and to lay down liable tissue to be used in early lactation.

The benefits of focusing on MP include:

How to stimulate more microbial protein synthesis in the rumen:

Bypass protein is not digestible in the rumen – it goes straight to the small intestine, where is it available as MP and can be broken into amino acids.

If there is enough microbial protein in the diet, bypass protein would not be needed as well for an average-yielding cow, but it is another way to boost MP.

Bypass protein can be sourced in the form of heat-treated rapemeal, protected soya bean meal and prairie meal.

Amino acids can be supplemented if lacking in forage and other ration components, which is why feed analysis is key.

The Wynnstay ration programme uses the Cornell Net Carbohydrate and Protein system( CNCPS) model, which predicts the amino acid supply from the MP in the small intestine. The supplementation of further amino acids is dependent on any deficiencies – methionine is usually most deficient, followed by lysine.

Supplementation needs to relative to metabolisable energy intakes. For example, grams of methionine required per megacalorie (Mcal) of ME is 1.14. Whereas, with lysine its 3.03g/Mcal ME

Feeding metabolisable protein to transition and close-up dry cows can build up the protein level within tissue.

This gives the cow a reserve so production is not lost in early lactation.