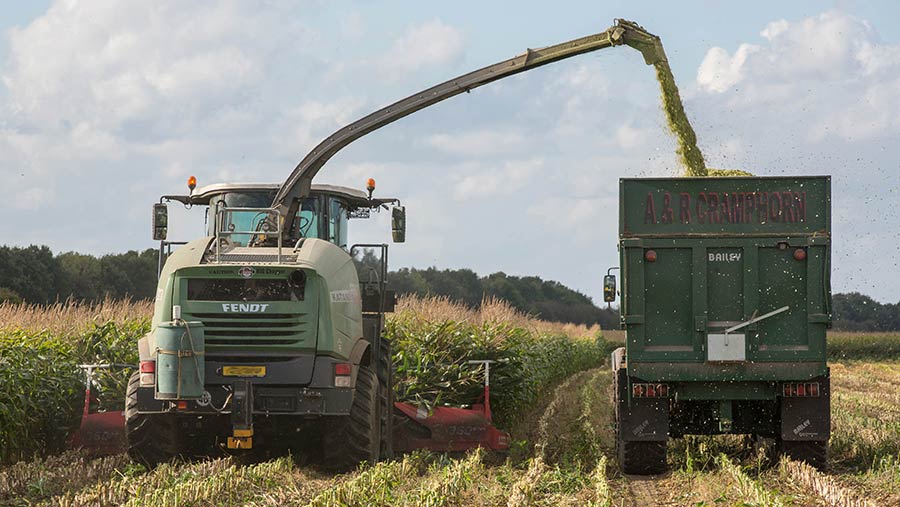 Maize harvest has started in the South East and East Anglia on light soils, with crop maturity aided by drying winds and no rainfall for several weeks.

In September, maize dry matters can increase by 4-5% per week, as was seen at John Hancock’s farm in Sussex.

Mr Hancock said: “My crops have grown well this summer. I have one block of stronger land which faces north and isn’t quite ready yet. We will cut this last and put it on top of the clamp to improve consolidation.”

“Getting the air out of the clamp can only be done by loading the clamp in shallow layers and continually rolling to squeeze air from the silage. With big machines there are a lot of tonnes arriving into the clamp, so plan how you are going to deal with it.”

The rule of thumb for good consolidation is that you need 25% of the weight of silage coming in to be rolling on top of the clamp.

For example, if you have six big trailers bringing in 100t an hour (one every 10 minutes), you need 25t of steel rolling the clamp – that’s the equivalent of three buckrakes and tractors.

Compactors carried on the three-point linkage are also a good idea as they give extra weight to the buckrake.

“If you are filling two clamps then split the loads and fill both at once, giving more room for rolling on,” Mr Groom said.

“The buckrake drivers then have more time to concentrate on the shoulders of the clamp.”

Once finished, Mr Groom said the clamp should be covered by an oxygen barrier film followed by a secure cover and gravel bags to prevent bird damage to the film over winter.

Sheeting up should occur as soon as the clamp is finished – while the harvest team is still on hand to help.