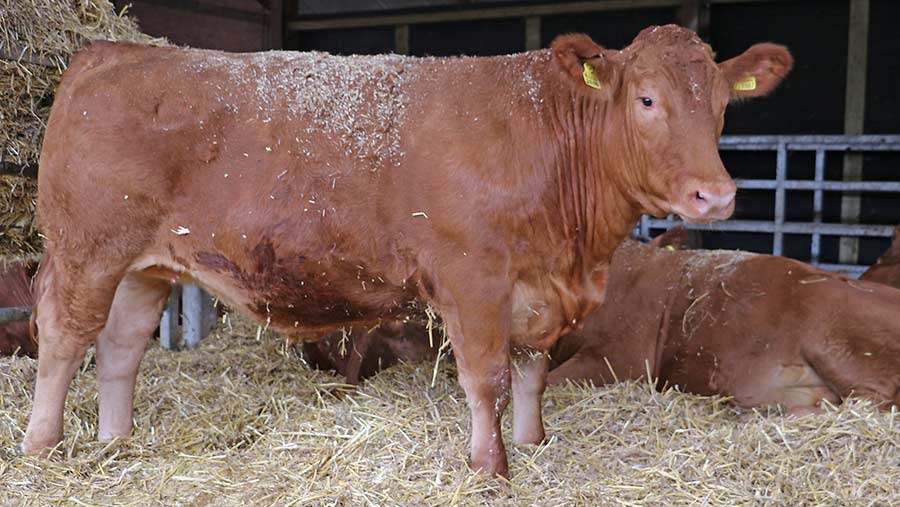 Replacing some cereals in the diet with a high energy forage for finishing beef steers can increase daily liveweight gain and increase gross margin by £115 a head.

They discovered that, while the TMR-fed steers finished 8.4 days later, they achieved higher slaughter weights (+33kg), carcass weights (+16.7kg) and based on values at the time of slaughter, higher carcass values (+£71.47).

The research concluded that replacing 50% of cereals in the finishing diet with good-quality, high-energy maize silage should be considered if resources are available to make, store and handle the forage.

Simon Marsh, principal lecturer at Harper Adams University who led the trial, said it must be stressed that the forage needs to be top quality and high energy.

“But I would expect similar results with any top-quality, high-energy forage such as wholecrop or grass silage.”

Mr Marsh acknowledged that if the market is there for finished bulls, this might be the best option for a finisher, but this cost-effective method of intensively finishing steers provides an alternative system for those who would face penalties for bulls in the abattoir.

“The forage-based TMR is a good healthy diet, it avoids acidosis and helps good rumen function. They transitioned well on to the ration,” he said.

“And I was impressed with the South Devons. They produced a handy carcass at 335-350kg and R grades at fat covers of 3+/4- suitable for all market outlets.”

Feed is the main variable cost of finishing beef cattle, and with volatility in cereal prices, the research aimed to evaluate the effect of replacing cereals with high-energy forage in an intensive finishing system.

The 34 steers were split into two equal-sized groups by a randomised method according to liveweight and Quality Beef Index of the sire, to create balanced treatment groups.

The animals were group housed in straw-bedded yards with three pens of five to six calves per treatment group.

The finished cattle were slaughtered at ABP Shrewsbury and carcasses classified by Video Image Analysis (VIA).

The two diets were formulated to be iso-notrogenous, which means they each supplied similar quantities of protein. Mineral supply was also identical.

Prior to the trial starting, all steers were fed 14% crude protein (CP) concentrates and maize silage.

The control ration (the cereals-based diet) was fed via hoppers and gradually introduced over 10-14 days. The maize silage TMR was fed in troughs. Both diets were fed ad-lib.

The overall performance of the steers was very good, with those slaughtered at 14.3 months old having carcass weights of 334-351kg.

The steers fed the forage-based TMR had higher intakes of dry matter and metabolisable energy (ME). They saw a daily dry matter intake (DMI) of 8.54kg and ME intake a day of 104.5MJ, compared with 7.22kg DMI and 92.2 MJ, respectively, in the control group on the cereals diet.

This would explain the higher daily liveweight gains of the TMR group of 1.4kg compared with 1.29kg in the control group. Overall, the cereal-fed steers ate 1,562kg/head of concentrates, with the TMR steers eating 2.3t of silage and 868kg of concentrates.

The TMR group did take 8.4 days longer to finish, at an average slaughter age of just 441 days. However, the slaughter weight of the TMR group exceeded that of the control group by 33kg, weighing in at 650kg.

Carcass classifications were very similar in both groups and both groups scored low on liver scores, indicating minimal issues with acidosis in the forage-based diet. All of the carcasses were deemed ideal for processor and supermarket specifications.