Switching from a two-cut silage system to three cuts a year has helped improve milk yields and grass quality at Tyn Celyn, Gwyddelwern, near Corwen in Denbighshire.

Hywel and Rose Roberts and their son John, who together milk 190 Holstein Friesians on 141 ha, have made a number of changes to their business in the past two years in an attempt to improve business efficiency and milk from forage.

Previously, two cuts of grass silage were taken a year, with cows milked through a 25-year-old abreast parlour.

The move to a three-cut system coincided with a need to upgrade the farm’s limited slurry storage capacity two years ago and the installation of three robots, which has seen cows being housed full time.

In the past, slurry used to be applied when the slurry store was full, but now slurry can be applied when it will be of most benefit to the grass. Year-round feeding of silage also fits well with the move to robotic milking, the family says.

More significantly, concentrate use dropped from 0.41kg/litre to 0.36kg/litre in the space of a year. And yield from forage more than doubled from 816 litres a cow from the 2014-harvested silage to 1,934 litres a cow as a 12-month rolling figure. 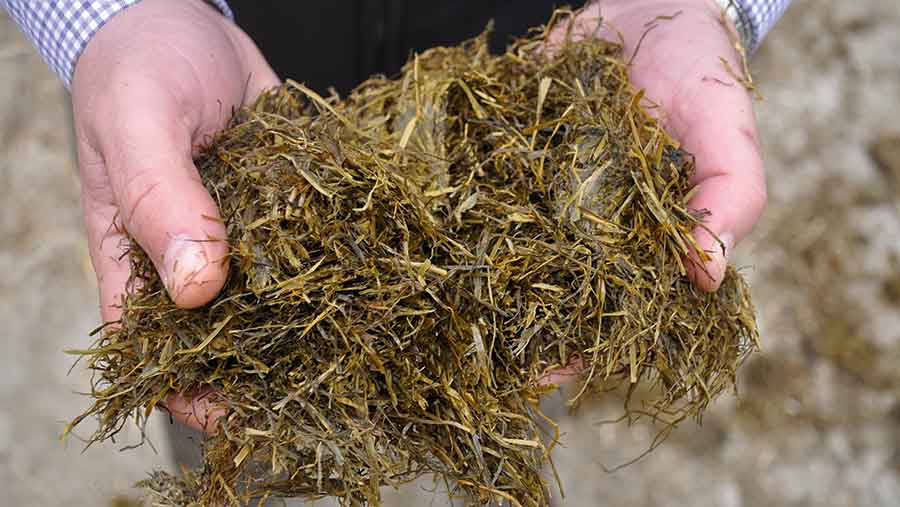 The metabolisable energy of first-cut silage has increased

Three robots were installed at Tyn Celyn one year ago. Before that, 70% of the herd was housed full time, but now the whole herd is housed year round, explains Hywel Roberts.

The decision was taken to install robots because the Roberts family wanted to increase milk yields and reduce labour.

“We did the sums. We get more milk through the robots. The average number of cow visits is 3.1, rather than twice a day with conventional milking, and we can save 42 hours a week. That’s one person, full time,” adds Mr Roberts.

“The decision all really started two years ago, when we put in a new 1.5m gallon slurry lagoon. That will hold slurry for five months, so we can put it on as and when needed when the grass is growing.

“With the move, we saw a chance to improve silage quality by going from two to three cuts, and it has been shown to be the case. The feed rate of concentrate has undoubtedly come down – we are getting up to £15,000 extra feed value in silage.

“The more you can grow on the farm, the less you have to buy in – that’s the way I look at it,” he adds. 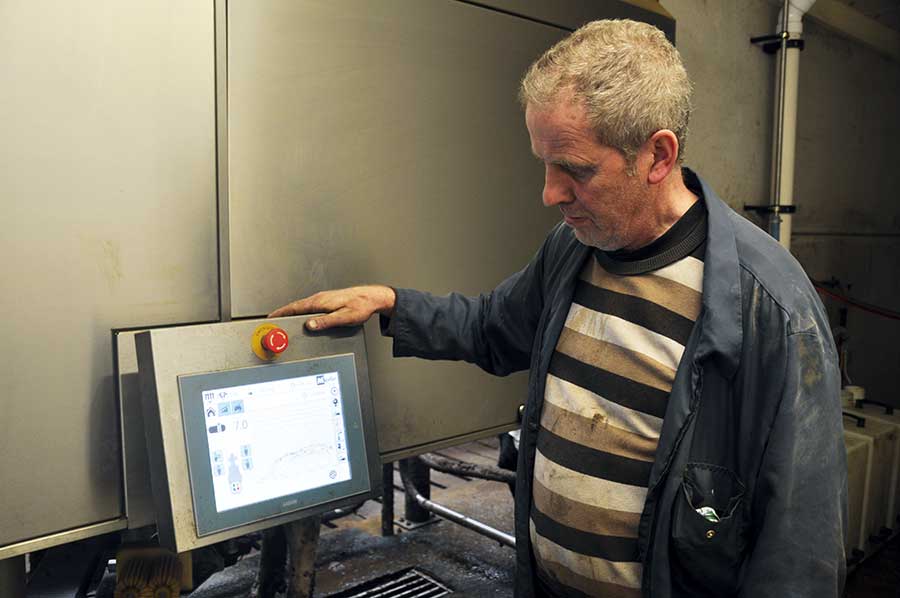 Hywel Roberts one of the farm’s with robotic milkers

The three-cut system and cow nutrition

In the first year of the three-cut system, cuts were taken on 20 May, 14 July and 15 September. Prior to that, the first cut had traditionally been in early June and second cut in early to mid-August.

In addition to grassland, 22ha of triticale is also grown on the farm for wholecrop, together with 14ha of spring barley.

Accordingly, the ration, fed through a mixer wagon, comprises grass silage, wholecrop triticale, caustic-treated barley grain, barley straw and blended mixed straights. Concentrate is fed through the robots, with the herd split in two lots – high yielders for the first 200 days of the lactation, and a lower-yielding group.

Cutting and feeding fresh grass to the housed cows with robotic milking was ruled out in favour of year-round silage, both for practical reasons and for consistency of forage. “I didn’t want to cut every day with the type of land we have,” adds Mr Roberts. He believes the land is too variable.

Instead, producing high-quality silage that is consistent is central to the system. Preserving with an effective fermentation in the clamp is a must, so an Ecosyl bacterial additive has been an integral part of the farm’s silage-making for the past five years, and continues to be so.

“All three cuts of grass silage and the wholecrop are treated with an inoculant. It brings reliability. You are safeguarding your crop. I don’t think you will find many 10,500-litre herds using less than 0.35 kg/litre of concentrate,” Mr Roberts adds. 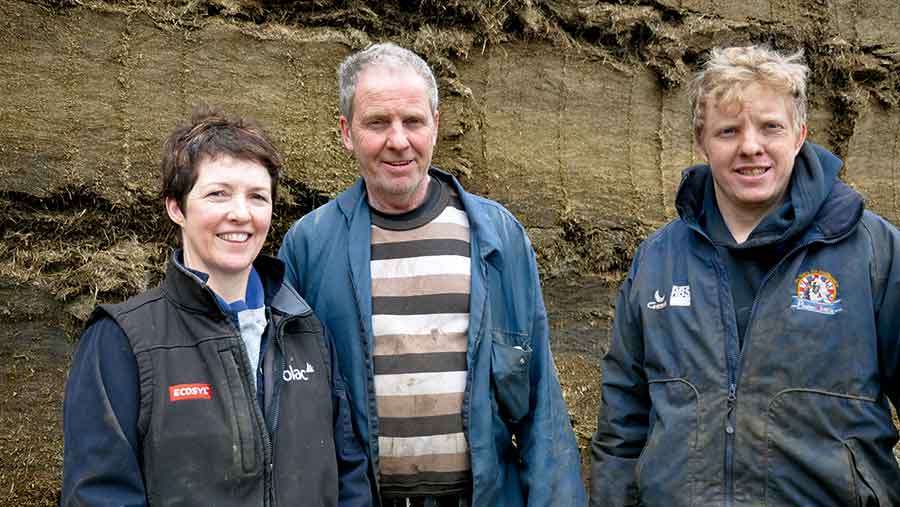 Hywel Roberts (middle) with his wife Rose and son John

With silage quality in mind, the Roberts family also pay attention to the details of other aspects of pasture management. About 12ha of grass is reseeded each year after triticale in a rotation, and they keep 1,000 sheep on tack to keep overwintered grass fresh.

Testing has proved invaluable too, he adds. “We have also had all our fields tested and there was no need for any P and K, so now we only have to use slurry and bagged straight nitrogen. That saved £9,000 in P and K alone. We also limed at that time where it was deficient.

“When it’s dry enough in summer, we will aerate fields where we need to. We also spot spray all the grassland fields for docks. It’s working, because we are getting fewer dock problems.”

Overall, Mr Roberts puts the improvements down to a combination of the three cuts, the robots and the better use of slurry.

“The benefits of the changes have been better silage, more milk, and the concentrate feed rate for every litre of milk has come down.

“We still have to feed for the extra milk we get. So we are using more feed a cow, but less feed a litre. The more we get from forage, the cheaper it is to produce the milk.

“Next year, we will be putting another robot in and going to 250 cows. We will also be digging another slurry pit and building housing for the extra cows and robot,” he adds.