About one-third of steer carcasses are failing to meet new, lighter-weight beef specifications, according to AHDB investigations.

Most processors have narrowed their grading specifications in the past 12 months, implementing heavy penalties for animals weighing more than 400kg.

While 85% of heifers are falling into the 260-280kg weight band, only about 60% of steers are meeting this specification, AHDB analysis of carcass weights over a four-month period shows. See the AHDB report (PDF).

However, there are steps beef farmers can take to ensure cattle finish within a target of 100 days and avoid hefty penalties.

1. Get the transition diet right 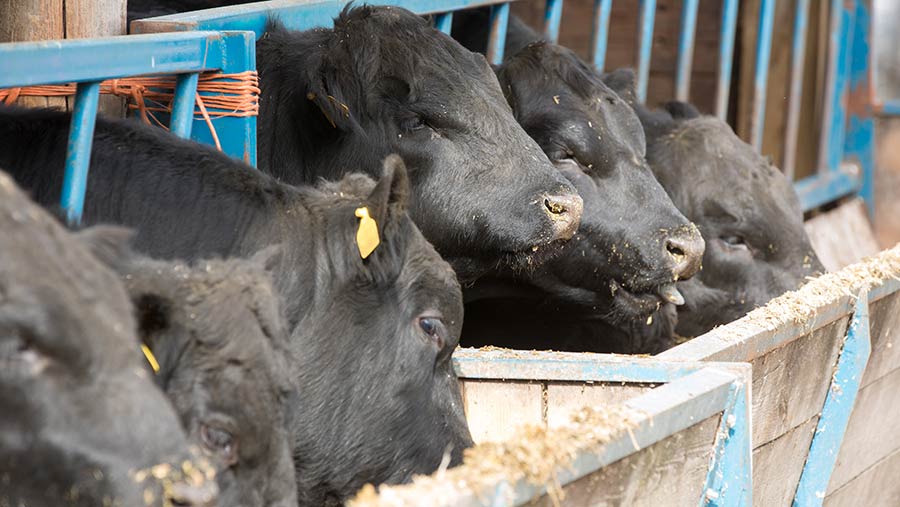 It’s important the transition diet is rumen friendly to ensure animals get off to a good start, explains Andrew Linscott, technical manager at Alltech.

“When new cattle move on-farm to be fattened, or existing cattle are introduced to fattening rations, rumen function is often compromised, which significantly reduces feed efficiency. This is due to a sudden change from a fibre-rich diet to a high-starch diet, combined with effects associated with stress.

“This results in a disturbance to rumen function, with sub-clinical and clinical acidosis being key problems that will significantly increase number of days to slaughter,” explains Mr Linscott.

To overcome this, he says, a very rumen-friendly diet should be provided for two to three weeks, with gradual incorporation of concentrate feed. “A good proportion of forage should remain in the diet. The inclusion of a live yeast that is able to buffer rumen acids can also be beneficial.”

Manure composition should be checked weekly, if possible, using a three-tiered digestion analyser.

You don’t want it to be runny or too firm, or contain whole grain particles or undigested feed, says Mr Linscott.

“You don’t want to be seeing a significant proportion of faecal material and undigested feed left in the top sieve. Something else to look out for is mucin casts, which appear black or slimy. These would indicate gut damage caused by acidosis.”

Mr Dreux says there are three key ways to improve this:

1. Don’t starve animals, as they will then eat big portions and blow up.

2. Provide animals with the right source of protein – slow, quick and moderate release. For example, 10-15% of fibre should be long to slow passage into the rumen to kick-start rumen bugs.

3. Avoid sorting by assessing feed troughs for chop length. There should be a small amount of fibre left. More or less is indicative that chop length is too short or too long.

Animals should be weighed at least once a month to enable average daily gains (ADG) and feed conversion efficiency (FCE) to be calculated.

The target should be for animals to put on 1kg liveweight for every 6-8kg of dry matter intake, says Keenan feed specialist Denis Dreux, who says the UK average intake is higher than this, at 10-12kg.

Good-quality silage is a basic starting point for any ration, says Mr Linscott.

This can be achieved by cutting at the end of the day, when sugars are highest, and wilting rapidly to preserve the sugars in silage. Make sure sheets are airtight and use a sheer grab rather than a bucket to avoid spoilage. 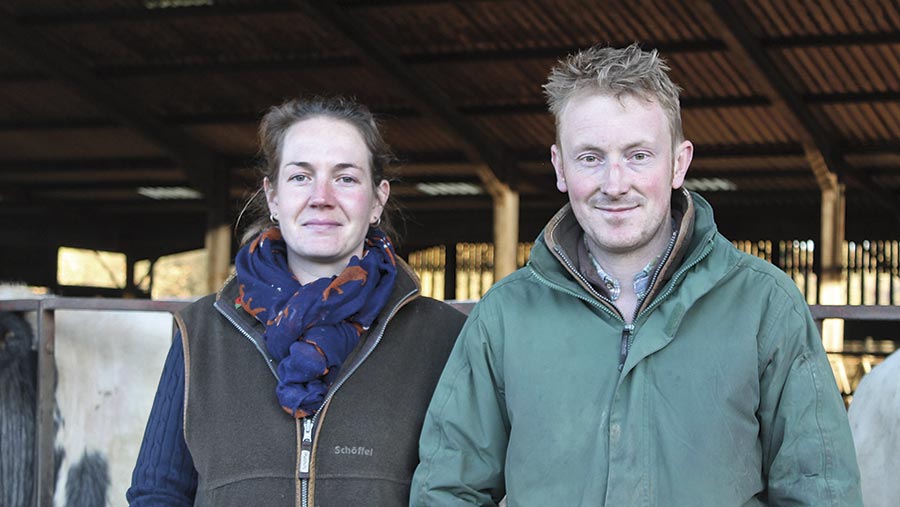 The Freemans previously ran 75 continental cross suckler cows, largely made up of Charolais and Simmental crosses, but calving difficulties prompted them to change breeds.

“We had five caesareans,” explains Mr Freeman, who farms 243ha in Bishopswood.

The couple have purchased 72 Stabiliser heifers that are due to calve in the spring, and are currently installing a 20m x 30m loose housing shed that will accommodate 200 cows.

Alongside the suckler herd, they currently finish about 100 cattle for Morrisons by the age of 20 months. To ensure the cattle don’t go over the supermarket’s 430kg weight limit, Mr Freeman has increased cereal in the TMR rations from 9.2kg a head a day to 10.2kg a head a day.

However, next year he plans to keep the Stabiliser bull calves entire and finish them by 12 months through Morrisons. Heifers will be sold as breeding.

“The plan is to go to all Stabilisers to minimise the disease risks. I have looked at various Stabiliser herds and think they are efficient, grow quickly and are easy calving.”

Mr Freeman hopes all these traits combined will help to lower costs and improve efficiencies by reducing days to slaughter.

“We have already noticed the Stabiliser eats a lot less grass than our continentals.”