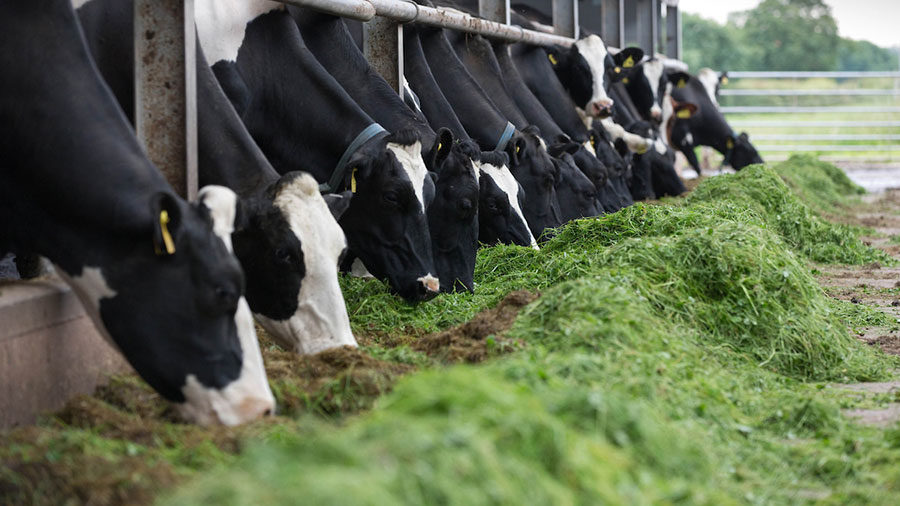 First-cut silage is less digestible and has a higher fibre content and lower metabolisable energy (ME) values compared with previous years, analysis of 200 samples taken from across the UK has shown.

But protein levels are up, which could mean less supplementation is needed.

Careful balancing of rations and regular silage analysis will be key for dairy farmers looking to keep yields high, but feed costs low, according to Mole Valley Feed Solutions, which carried out the analysis.

See also: How to cut silage spoilage and on-farm plastic use with HOB film

“Rations will have to be modified this year if silage analyses show a low lactic acid to volatile fatty acid (VFA) ratio, as this affects rumen function.

He recommends incorporating live yeast into the ration to aid digestion of silages with high fibre and lower D-values. Live yeast also can lead to higher VFA production, increasing energy from the rumen, he says.

“While results show lower energy, protein levels appear OK, meaning less supplementation of protein may be needed. This is a win for farmers’ pockets and the environment.”

He also advises testing silage if there is a noticeable drop in production, or a change in the cows, as this could indicate a shift in the silage quality.

The use of additives in later cuts could help improve overall fermentation, says Dr Hawkey.

“While they are traditionally used on earlier cuts, these first cuts may not be as milky as previous years because of the lower metabolisable energy and D-values, so farmers may be more dependent on these later cuts to help them through.”

With many farmers likely to open clamps earlier this year as high temperatures limit grazing availability, Dr Hawkey says they should also be aware of the mycotoxin risk that could follow.

“Mycotoxins tend to be a problem in drier silages. If farmers don’t move across the face fast enough, secondary fermentation and mould formation can pose a significant risk to cows.

“Mycotoxins are also a risk when there isn’t adequate fermentation, leading to more unstable faces of those drier silages. Mycotoxin binders are very effective and work quickly, and cost 7-8p a cow a day.”