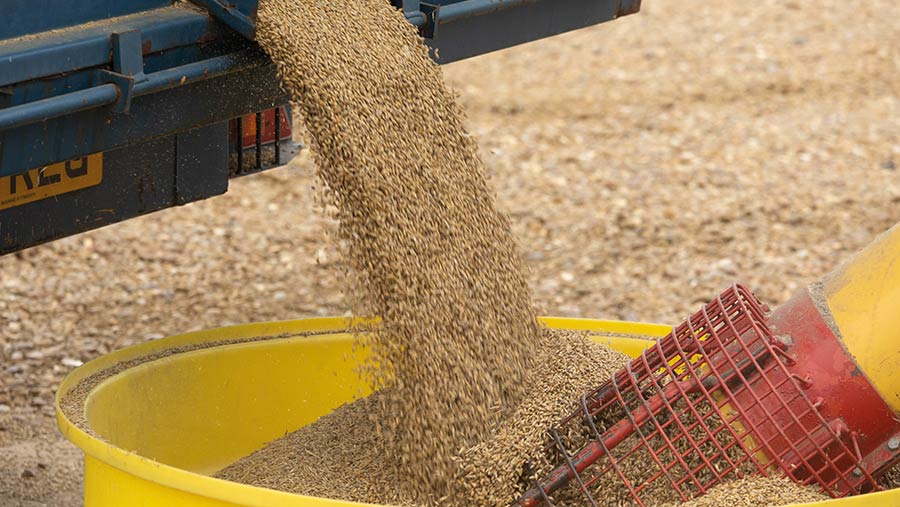 Urea-based products used to preserve rolled grain lose at least 40% of nitrogen content before they are consumed by the animal, new research has shown.

Urea acts as a preservative, reducing moulds, and increases the crude protein content of grain stored at 12-22% moisture.

However, 40-70% of the nitrogen in urea is lost to the environment through the release of ammonia and its subsequent volatilisation, especially after unsheeting the clamp during feed-out, the research has found.

This has serious implications for farmers aiming to comply with proposed new environmental regulations limiting ammonia emissions. It is also hazardous to human health and a wasteful process, in terms of feed efficiency and cost.

See also: What are the pros and cons of min-till maize?

Two scientists specialising in animal feed preservation have independently corroborated the findings in the laboratory and on-farm.

They have come together to warn farmers about the negative effects of using urea to preserve cereals for animal feed and are calling for urea-based products to be withdrawn from use as a feed preservative.

Horst Auerbach, from the International Silage Consultancy, carried out a collaborative study with the University of Applied Science in Nurtingen, Germany, to investigate the performance of two urea-based additives compared with that of propionic acid-based products and untreated rolled barley.

The urea-based products were found to have lost 44% and 58% of their added nitrogen by the time the silo – in which the grain had been preserved – was opened.

These losses increased further on exposure to air, reaching 61% and 66% after 28 days. Left for 63 days, which is not uncommon in farm situations, the nitrogen losses had risen to 66% and 73%.

In the UK, Silage Solutions’ Dave Davies has observed similar findings. He took comparable measurements of grain, preserved using one of the same urea-based products as the German trials, from a clamp on a Ceredigion farm.

He found that 40% of the nitrogen added had been lost by the time the clamp was opened.

The scientists say their work only confirms what is already known from trials undertaken since the 1970s.

Research published at the time demonstrated that, while urea acted as an effective grain preservative, it did so at the cost of significant nitrogen loss.

“Agriculture is under extreme pressure to clean up its act, and ditching urea is an easy and substantial win for anyone who’s using the product for grain preservation,” says Dr Auerbach.

“There are better ways of preserving moist grain, including with acids, which – as shown in the laboratory trials – don’t involve the production of wasteful and undesirable gases.”

Dr Auerbach says urea has no place as a grain preservative where its whole function is based on its conversion to ammonia – a gas that comprises 82.4% nitrogen.

He says it doesn’t matter whether the additive is liquid or solid: if it contains urea, it will have the same results.

“Farmers [who’ve used urea] will appreciate this when opening a treated clamp, as the classic urine smell of ammonia tells them they are losing nitrogen into thin air.”

“Unless this is adequately matched in the ration with very readily available energy in the form of sugar, it will produce high levels of ammonia which are toxic to the rumen,” he says.

“This is shipped into the bloodstream where it’s converted back to urea nitrogen, which is known to have negative effects on fertility.“

It will also exacerbate negative energy balance in early lactation and lead to more urea excretion, which will be volatilised as ammonia and other nitrogen oxide gases [nitrogen oxide and nitrogen dioxide] from the urine.

The losses are similar to those identified by Defra in a project in 2006, which found that urea applied to grassland lost, on average, 30% of the applied nitrogen as ammonia.

“Just as farmers are being urged to remove urea from their fertiliser protocols, we would urge them to remove products containing urea, and urease – the enzyme which promotes the necessary breakdown – from any form of grain preservation,” says Dr Davies.

“Most farmers would not tolerate spending money on a product, up to 70% of which may be wasted,” adds Dr Auerbach.

“But someone has to demonstrate the science which shows how urea-based products are being mis-sold and are not performing entirely as promised.”

What should be used instead?