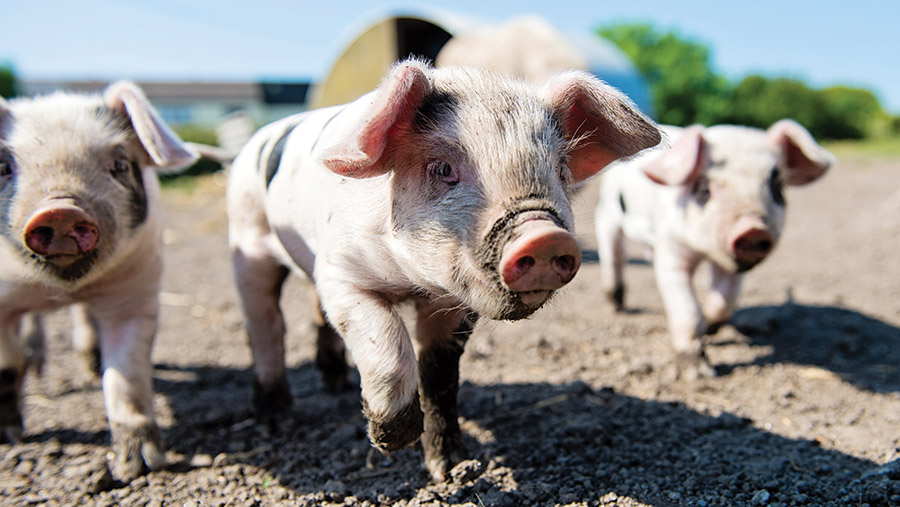 When Cornish couple Sally and Bill Lugg were given two Gloucester Old Spot gilts as a gift from Mrs Lugg’s father, little did they know their hobby would turn into a thriving business.

The Luggs, who are based near Redruth, Cornwall, originally started showing and breeding their own pigs and finishing a few to sell as half carcasses.

But in 2001, the farm was put under foot-and-mouth disease restrictions. Within a week, tragedy struck, as Mrs Lugg’s father died unexpectedly.

See also: Options for getting into pig farming

The two events changed the direction of the farm business.

After 12 months, foot-and-mouth restrictions were lifted and the couple relocated the Large Black herd to Primrose Farm.

This marked the start of their fledgling enterprise and, fast forward nearly two decades, the couple are selling 25 rare breed pigs weekly through a mix of wholesale and retail routes.

The Primrose Herd has won countless taste awards over the years and has grown sales through word of mouth, alongside social media, the website and an e-newsletter.

The Luggs installed a small on-farm butchery 12 years ago and have since expanded, employing their own butchers and packers and bringing everything in-house.

“It meant that we had total control over the whole process,” explains Mrs Lugg.

The pigs are slaughtered at JV Richards, just 10 minutes down the road, and the Luggs have the facilities to butcher, cure, smoke and process everything they sell to make use of the entire pig carcass.

They now sell directly from the farm butchery, as well as at farmers’ markets, shows, and via mail order through their own website.

However, about 80% of their sales are wholesale, supplying high-end restaurants, hotels, street food vendors, farm shops and box-food schemes.

The herd has expanded to 20 sows – a mix of Gloucester Old Spots, Large Blacks, British Saddlebacks and cross-breds – plus youngstock.

Pigs are mated to two boars naturally and there are very few sows that don’t get in-pig.

Each sow has two litters a year, averaging between 12 and 16 piglets each.

They are all free-range, kept on grass in arks, and farrow outside unless there is a problem, in which case they are brought into the shed and bedded on straw.

“We used to have a problem with badgers and foxes – one night we lost 15 piglets from two sows – so now we put metal sheets in front of the ark overnight, to tuck them up in bed for the first seven to 10 days.

“It’s easier to do in the winter though – in summer they want to come out and wander.”

The piglets are weaned at six to eight weeks old – larger litters are weaned a week early – with the sows simply moved and the piglets left in the field. 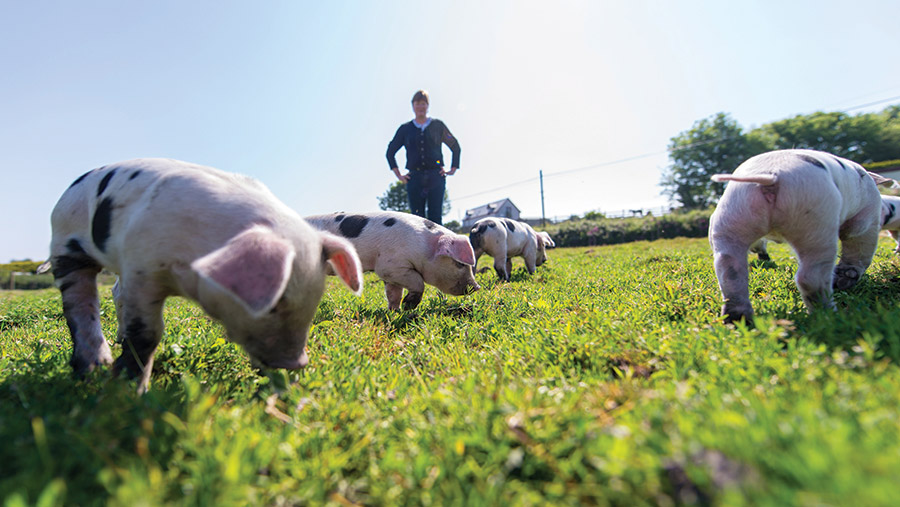 “We don’t creep feed; the piglets just start eating the sow rolls, and then we gradually move them on to a finishing pellet,” says Mrs Lugg.

The Luggs finish the rare breeds at 28-30 weeks, housing them on barley straw in the final few weeks in groups of boars and gilts.

“They get 1.5-2kg of pig finishing ration per day, but they’re very slow growing.

“If you push them, they’ll get over-fat.”

High welfare is a key selling point and none of the piglets are castrated, docked or tooth-clipped, with the only routine treatment being worming.

The herd was placed under TB restrictions almost 10 years ago after a single case was detected at the abattoir.

Since then, thousands of pigs have been reared on the unit without a further case but, despite this, restrictions remain due to inflexible TB rules for pigs.

This has meant the Luggs have been unable to increase the herd size by bringing in new pigs.

“We can’t bring in livestock because in 2010 we were put under TB restriction, and with pigs it’s very difficult to get that lifted without culling everything,” says Mrs Lugg.

“We have one Old Spot boar and one Large Black.

“We have to keep our boars for as long as possible as it’s very difficult to get a licence to bring one in,” she adds.

To meet customer requirements, they buy in carcasses from Welsh, British Lop and Tamworth pigs from 10-12 smallholders, which have been slaughtered locally.

TB restrictions meant all live sales and showing activities also came to an abrupt halt – one reason why the family focused on growing the direct sales. But this has advantages.

“Without increasing the meat sales, we wouldn’t be here now.

“We also run a closed herd, which means we don’t bring in any health challenges, so we don’t have an issue with that.”

Although the rare breeds finish at 60-65kg for farmers’ markets, the more commercial types, such as the Welsh breed, are taken up to 100kg for bacon and the wholesale market.

“It can be quite difficult to achieve consistency when you’re buying in, with traditional breeds it’s a real balance not to let them get too fat,” explains Mrs Lugg.

With their three children now involved in the business, they hope to increase sales year-on-year.