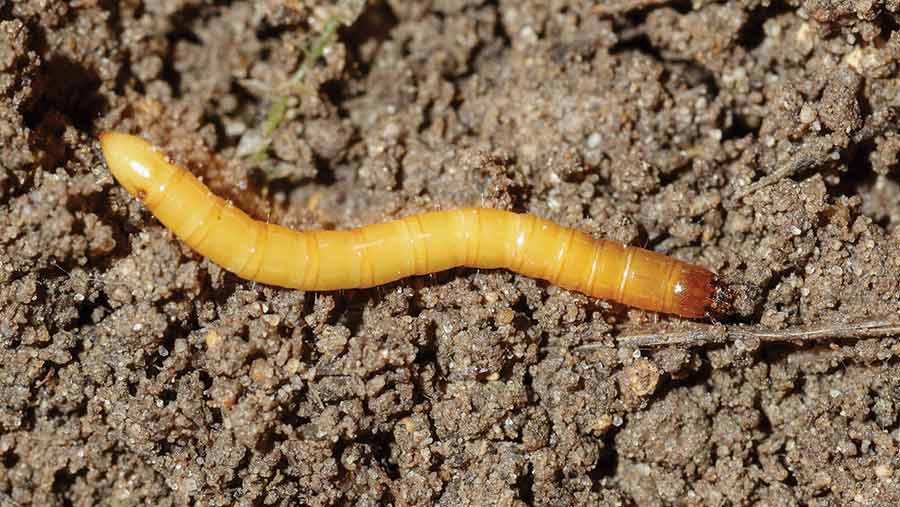 Pests, weeds and disease in maize crops can severely reduce yield and quality.

For each one he gives advice on: what the threat is, how to spot it, how to control it and the damage it causes. The guide covers the following: 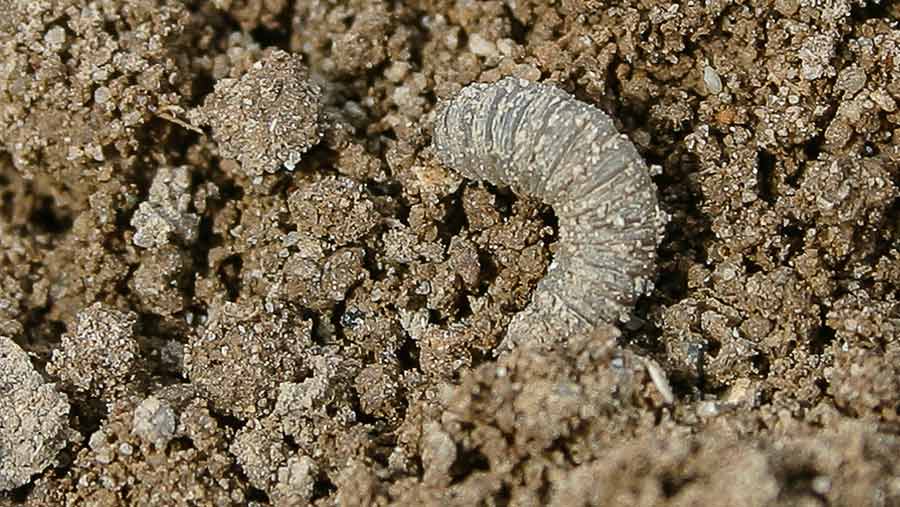 These are the biggest pest threats to the young maize plant.

Wireworms are golden brown larvae of click beetles while the fat, grey and legless crane fly larvae are known as leather jackets. These have an annual lifecycle while wireworm larvae exist in the soil for four to five years.

Losses The larvae feed on plant roots, causing them to die off. It is possible to lose most of the plants in a field but more often, losses occur in patches or within the rows.

There is a heightened risk if fields have come out of long-term grass or stewardship schemes. That’s because adult insects lay eggs in dense grass and populations accumulate over several seasons.

The risk is highest in the second year after grass, as the larvae feed on the old turf in the first year.

How to spot them The larvae go up and down the soil profile according to temperature. In a warmer spring they move up towards the surface to feed on roots.

Dig out a core from the soil and leave it for an hour on a warm day. If the larvae are present, they will come up to the surface.

Control There is no spray chemical control available but if there are any larvae visible, an insecticide seed dressing of Sonido (thiacloprid) should be applied.

Some cultivation techniques can reduce populations by exposing larvae for birds to pick off.

Drilling later is the most effective non-chemical control because the soil temperature allows the plant to grow through the damage.

See also: How to reduce pest pressure in autumn-sown reseeds 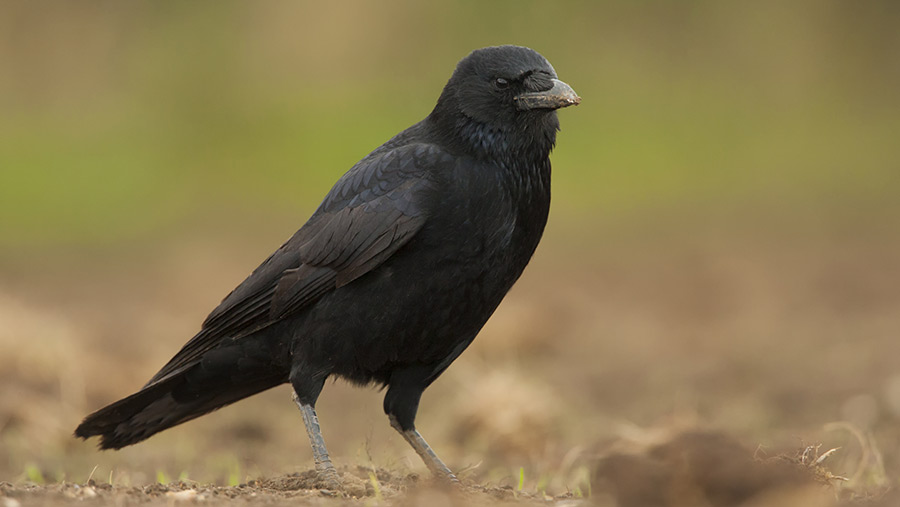 Encouraging birds to tackle insects as a method of control can be a risky business because some birds, particularly members of the crow family, are pests themselves.

Danger periods Birds are attracted to fields that have been ploughed out of grassland because there tend to be high levels of insects in the soil.

Rooks, crows, pheasants and other birds can cause considerable damage to maize crops by pulling up the young plant to get to the seed for two to three weeks post-emergence.

Control Controlling birds through the high-risk period is essential through the use of scarers like gas guns and kites.

The insecticide Mesurol (methiocarb), which is commonly used to treat seed, also has some effect as a bird deterrent. But thiacloprid-treated seed cannot also have a methiocarb coating, so where crows and soil-borne larvae are a threat treat half of your total seed with each dressing and mix them evenly in drill units.

The vigorously growing maize plant will normally outgrow slug damage. But if conditions are favourable for slug activity (warm and moist soils), slug pellets may need to be applied, using ferric phosphate to protect groundwater. 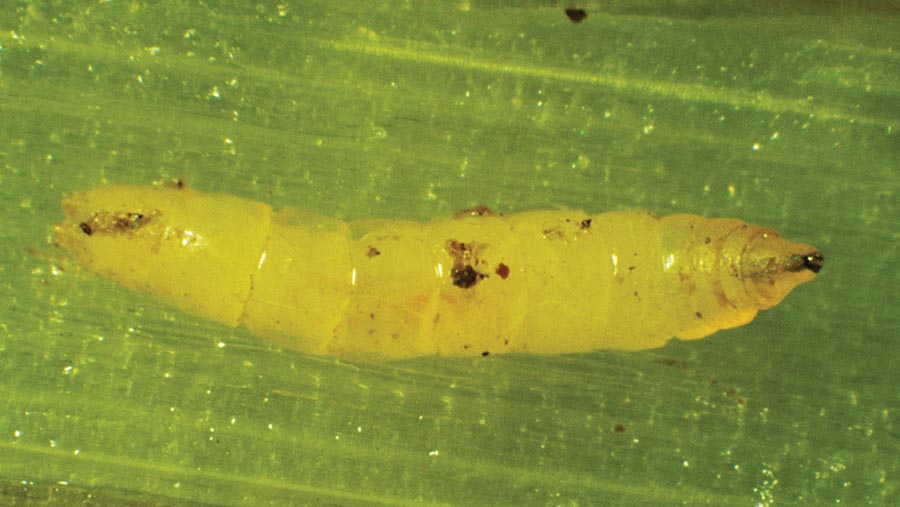 The larvae burrow into the plant causing a condition known as deadheart, and a severe attack can kill the growing point, causing secondary tiller production. However, when growing conditions are good the plants will often grow away from any attack. As frit fly is a common pest, seed in the UK is frequently treated with methiocarb to protect it.

Maize diseases can cut silage yields and feed quality if they are not controlled. It is particularly problematic when disease occurs early in the season before earfill. 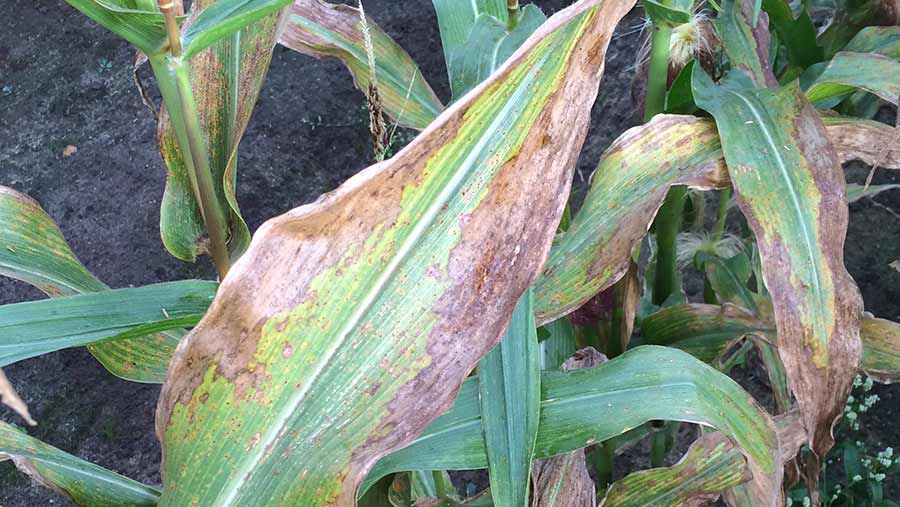 How to identify it Maize eyespot appears as very small circular spots 1-4mm in diameter on the lower leaves.

The central part of the spot dies, leaving a brownish centre, surrounded by a purple-brown border and an outer yellow halo in the shape of an eye.

Spores are produced within the lesions and can lead to further infection on the leaf. They then coalesce and the whole green leaf area can be lost.

Blown in from Ireland, eyespot appears during long periods of cool, wet weather in the west of Britain. The disease can also survive on crop residue.

Eyespot – how to control it Crop rotation, ploughing down of trash and choice of a more resistant variety can reduce disease reservoir.

The grower can manage the disease, first by choosing the right hybrid. All varieties are screened by the National Institute of Agricultural Botany (NIAB) are given a rating. So using a more resistant variety is a first step.

Fungicide mixes such as Comet (Pyraclostrobin) or Quilt Xcel (Azoxystrobin + propiconazole) have been shown to give six weeks protection and delay the eyespot infection. This protects the plant long enough for starch to be laid down but will require a high-clearance sprayer.

During cold, wet summers in areas where there is a history of eyespot infection, growers are advised to apply the fungicide pre-emptively. 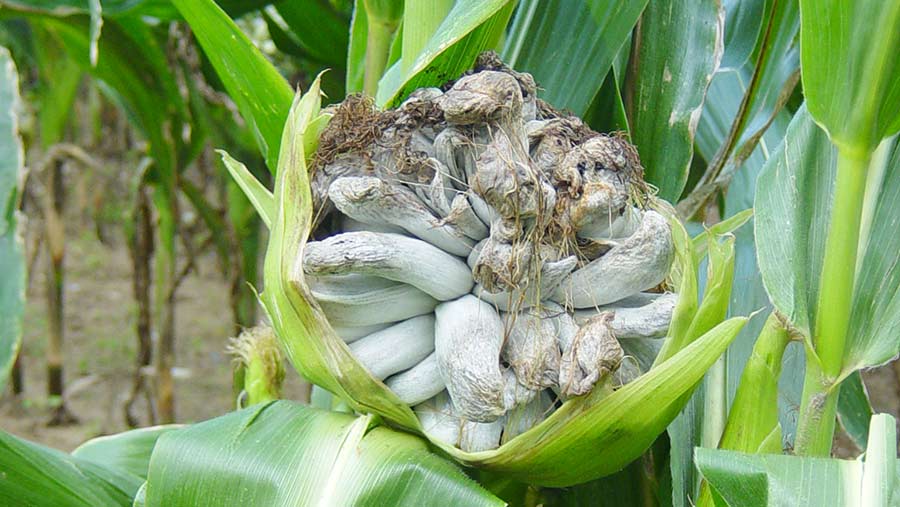 How to identify it Smut causes corn kernels to swell into tumour-like blisters which are up to 10cm in diameter. Initially grey, they erupt to release brown or black spores giving the cob a scorched appearance.

It is rarely an economic problem but where it occurs it is possible to lose the grain content of the individual plant.

The fungal spores overwinter in soil or plant residues and spread to the growing plant through rain splash or on the wind. Smut only appears when the weather is hot and dry, often after drought or strong winds have damaged the plant, allowing the spores to enter its tissue.

How to control it As the pathogen over-winters in crop trash it is more frequently seen where maize has been grown continuously.

Good rotation of maize crops to eliminate the green bridge and selection of resistant varieties are the only methods of control. 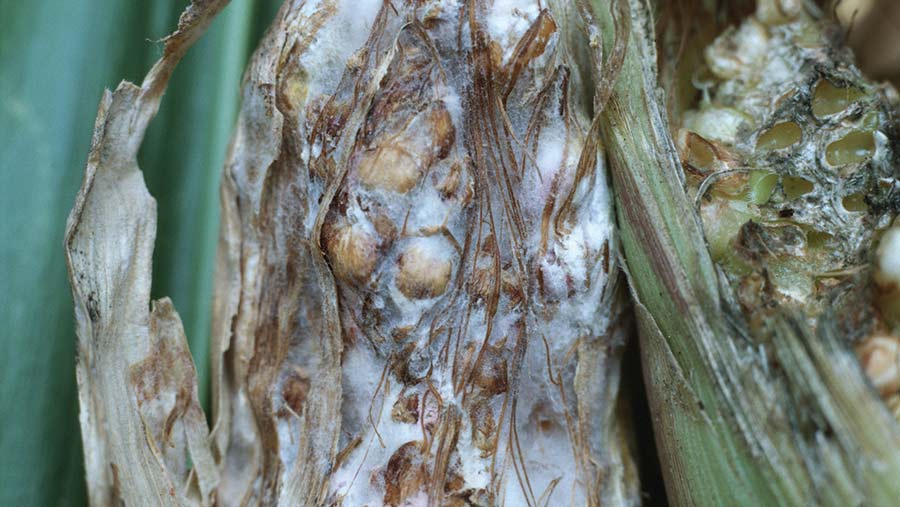 How to identify it This appears as a white mould but it can lead to gibberella ear rot – a reddish, purple mould. Infection begins through the silk so the disease works its way down the ear.

The crop is most susceptible if the weather is wet two to 10 days after silk initiation. The disease is important because it produces a toxin called deoxynivalenol.

Fusarium species also attack the stem base causing stalk rot – usually during August and September. This can lead to lodging, the leaves also wilt and there is a notable drooping of cobs.

How to control it Select varieties with a good resistance rating and carefully dispose of debris from previous crops by ploughing in trash. 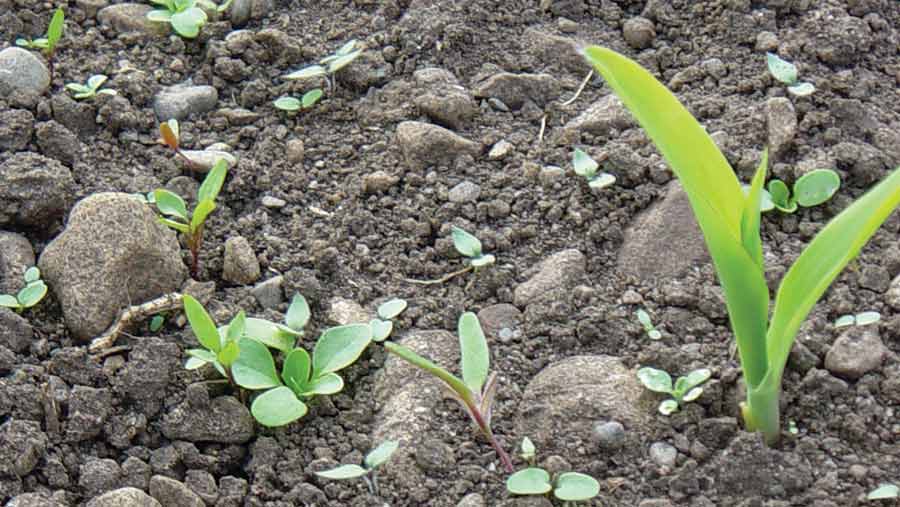 Dense weed populations compete with the maize crop for, sunlight, water and soil nutrients. This can reduce silage yields by up to 50%.

The most serious competitors are nightshade, mayweed, orache and fat hen. These can be controlled effectively with herbicides. But, where maize is being grown on arable farms, herbicide-resistant blackgrass can cause additional problems.

As a crop, maize has an advantage that it is drilled relatively late in the season. That allows time to let blackgrass emerge and tackle it with glyphosate before drilling.

How to tackle them For broadleaved weeds, growers should assess the species on their farms and tailor active ingredients to find the best solution.

If there is sufficient moisture in the soil for the active ingredient to work after drilling, early control will be gained from a pre-emergence herbicide of Wing-P (Dimethenamid-p + pendimethalin), Stomp (Pendimethalin) or a mixture of the two.

Spray regimes usually comprise two applications of either one pre-emergence spray and one post-emergence spray or, depending on weather conditions, two sprays after the crop is growing.

However, if it is very dry, wait for a post-rainfall flush of weeds, assess the species and tackle them with a targeted herbicide soon after the crop has emerged.

Optimal spray timing is before the four-leaf stage in the maize plant to reduce herbicide damage to the crop as young plant will take up less herbicide through its smaller leaves.

For post-emergence broad-leaved weed control Calaris (mesotrione + terbuthylazine) is effective while a nicosulfuron-based product such as Milagro will control more stubborn grassweeds.