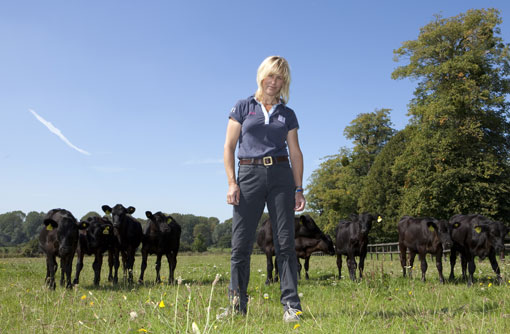 This week we have had a visit from television’s Countryfile. John Craven wanted to talk to David Clarke, chief executive of the Red Tractor assurance scheme. It seems crazy, but promoting the British message is not easy. State aid regulations prevent the levy boards promoting British, and it makes me realise how much we need initiatives like Ladies in Beef where we are free from regulation and can get on with championing British beef.

The flagship event for us is The Great British Beef Week, which runs annually around St George’s Day, on 23 April. This year we have decided to use the week to raise a substantial sum for Help for Heroes. Auction marts and butchers will all be able to apply for fundraising packs, plus we have the likes of Tesco and Asda supporting the week with on-pack stickers and Ladies in Beef producer stories in their in-house magazines. If you would like to know more, look on our website – www.ladiesinbeef.org.uk.

Next time I buy a bull I’m going to pay more attention to its name. We bought a bull last summer called Lepo, he was aptly named because he flatly refuses to stay in a field on his own and happily jumps round the farm until he finds the cows. It’s a different story with ponies, the name rarely reflects the true character, and often means the opposite – Mr Happy is so called because he is in fact Mr Savage. The same applies to adverts that start with “Mother’s dream”, which usually means “Mother’s worst nightmare”.