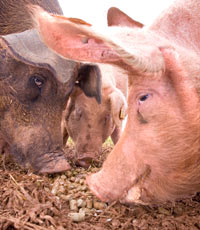 An organisation formed to safeguard native pig breeds in Wales could be the subject of an investigation after alleged internal disagreements.

Although the Pedigree Welsh Pig Society denies there is an issue, some leading breeders are understood to have resigned or been expelled.

The Society was created thanks to a £376,000 support package from the Welsh Assembly Government. It aims to increase registered pedigree Welsh breeding stock to 2000 by 2012 but there is understood to be a lack of consensus on how this should be achieved.

Reports suggest there has been a string of complaints centred on the cancellation of a launch in South Wales and alleged threats against questioners at an extraordinary general meeting in May.

The Welsh Assembly Government has now been asked to intervene and the matter has been brought to the attention of Wales’ Rural Affairs Minister Elin Jones.

The Society confirmed its board of directors remains in place and continues to work within Assembly guidelines.