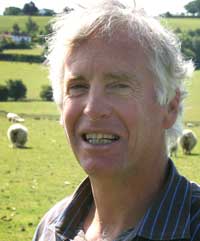 UK sheep farmers can learn much from their New Zealand counterparts, but there are also lessons to to learnt by the Kiwis from UK producers, according to leading New Zealand ram breeder Derrick Daniels (pictured).

Speaking to Farmers Weekly during a tour of the UK, Mr Daniels said there was no doubt in his mind that UK farmers were better at managing their feed requirements. “Many New Zealand sheep farms are too heavily stocked, possibly to the point of being overstocked. This isn’t always to the detriment of stock – but UK farmers do, in general, have better-condition sheep than we do.”

New Zealand farmers have been forced by low prices to generate easier-care sheep and to reduce interventions to virtually nothing; they have developed these systems out of necessity. “There are many people trying to replicate these systems here, but the UK has a long way to go in understanding what easier care is. This is partly because of being hamstrung by legislation,” explained Mr Daniels.

“I think the UK is the only country I’ve been to where animal welfare is ahead of human welfare. Farmers in the UK are expected to see their stock at least once a day; you can never have a truly easy care system when you’re spending a large part of every day simply looking at your sheep.

“In New Zealand, I estimate that only 30% of sheep are seen on a daily basis, at lambing, because most of the ground sheep are run on is only accessible on foot or horseback. Equally, with an outdoor lambing system, the minute you go into a lambing paddock you cause problems because you disturb the ewes.”

“This is because all the good ground is used for dairying. There is more money in dairy than there is in sheep, so we can’t compete for the best farms. Even arable farming can’t compete with dairying in New Zealand. The average price for sheep products is NZ$3.64/kg (£1.70/kg), whereas for dairy it is NZ$5.70/kg (£2.70/kg).”

Because of restrictions on land and feeding, New Zealand sheep producers have adapted their systems so that most run self-replacing flocks rather than buying in replacements and running flying flocks as most UK farmers do, said Mr Daniels.

“This allows them far more control over their genetics and they get to see the mistakes of their selection process in their own flock. They are, therefore, far more critical of their breeding stock and more questioning of their genetics.

“And because we can’t rely on purchased feed, our sheep have to be able to buffer themselves in times of hardship. We want a ewe that is capable of carrying a bit extra cover to see her through the tougher times. They also have to have a big rumen capacity to help them digest poorer quality grass and forage. We have developed a feeding system designed to force out the worst performing sheep at the bottom, rather than push the best performers out the top.”

The ewe flocks have also been bred so their lambs have get-up-and-go. Lambs have to be up and sucking quickly to ensure they survive, he said. “Lambing fields are chosen carefully and anyone looking to develop an outdoor lambing system should try to lamb on free-draining ground. This prevents lambs being born onto waterlogged ground and getting chilled.”

As the man behind one of the largest ram breeding operations in New Zealand, the Wairere Romney stud – the genetics behind 2009 Farmers Weekly Sheep Farmer of Year winners Chris and Caroline Hodgkins – Mr Daniels is aware of the need to continually improve the sheep he breeds.

“My goal is to ensure my customers’ sheep are easier to manage and, crucially, more profitable. We mate our ewe lambs and anything not in lamb is either sold finished or sold on as a breeding ewe,” he says.

“This selection pressure means we are only breeding from the most fertile stock, meaning customers are confident the rams they buy are doing the job they’re intended for. We expect our ram lambs to tup at least 100 ewes and our older tups to work on 150 or more ewes easily.”

This is perhaps one area where UK farmers can learn from their New Zealand counterparts, he believes. “The capacity of a ram is massively underestimated in the UK. Rams are capable of covering more than 100 ewes a year, yet most UK farmers still operate on a ration between 1:40 and 1:50.”

Mr Daniels sells more than 3000 rams a year in New Zealand, with another 300 hired out annually, from a ewe flock of about 30,000, 5300 of which are run at the home farm, alongside 2000 lambing ewe lambs. “Increasing the number of ewes each ram serves is the best way of making the most of high-quality genetics. The more ewes he covers, the more of his genetics you have in your flock. You can then afford to pay a bit more for better rams as the cost is spread over more ewes.

Analysing what he saw during his UK trip, Mr Daniels said there were several key lessons UK farmers could learn from the southern hemisphere. “First, you have to let the animals work so you don’t have to, then you have to develop your farm infrastructure and the stock to allow one person to handle a lot more stock. Reliance on the feed bag must also be reduced, the cheapest feed is grazed grass and more use should be made of it.

“I also believe the EUROP grading system is a massive distraction. Fast-growing lambs that require minimal feeding will leave more profit than top-end grades. There is a huge cost opportunity in going for slower-growing extreme conformation breeds.”

That said, Mr Daniels accepts there are both cultural and climatic differences in the UK that mean New Zealand systems can’t always be replicated in the UK. “But there is room for both country’s farmers to learn from one another and to make the best of the situation they have.”