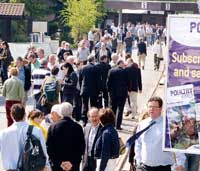 Pig and poultry producers may be some of the most efficient livestock farmers in the country, but that doesn’t mean there aren’t additional ways to cut costs and boost profits.

And this year’s RASE/ABN British Pig and Poultry Fair offers the perfect platform for farmers interested in improving efficiencies with more than 250 exhibitors and a packed seminar schedule geared up with information.

One workshop which may generate a lot of interest among those producers wishing to boost profits as well as reducing environmental impact is the anaerobic digestion workshop.

BPEX‘s Nigel Penlington will not only give advice on the practical aspects and benefits of installing anaerobic digesters, but Gloucestershire pig farmer James Hart will also talk about some of the barriers he had to overcome.

Mr Penlington says there is a lot more to gain from anaerobic digesters than many think. “There’s more to gain than simply a supply of electricity, such as the new ‘Feed in’ tariffs offered by the National Grid and ‘by-products’ from the digestion process.”

Mr Hart will also talk about the additional benefits he has achieved by installing an anaerobic digester on his 400 sow unit, in collaboration with a neighbouring poultry producer, such as the use of surplus heat from generating electricity and the high value digestate.

Another area expected to attract a lot of interest will be commodity prices, which forms one of the key forum topics this year. Three industry experts – ABN’s Hugh Burton, Frontier‘s Simon Christensen and Cargill‘s Alex Miller – will each give their opinion on future raw material issues.

And with feed the biggest cost in pig and poultry businesses it can have a huge bearing on profitability, says event director Alice Bell. “Trying to predict the outcome of the next harvest is difficult enough, but understanding all the other factors that may ultimately affect prices has become increasingly complex,” she says.

The volatility of exchange rates, the precarious UK economy coupled with a general election may all have an effect on cereal and protein prices, believes Ms Bell. “Our speakers will present their views on the likely effects of these and other factors,” she says.

Health is also an issue that can have a huge effect on profitability and, after the launch of the Yorkshire and Humberside Health initiative last year, vet Nigel Woolfenden will be discussing the success of the project a year on.

He says the level of commitment from producers in the regions has been astounding. “The initiative is all about communication and co-operation and I will demonstrate how this has been crucial in enabling the mapping out of units to happen and establishing the health status of each one.”

Pig producer Richard Lister will discuss the biosecurity measures the YHH initiative is putting in place. “We are developing comprehensive protocols that should stand us in good stead should there be disease threats in the future and I will be sharing these ideas with the pig health forum,” he says.

• Entry to the event is free, but registration will be required

11am Can we get consumers to buy more British? (Tuesday)

10.30am So you think you want to go in to poultry (Tuesday, Wednesday)