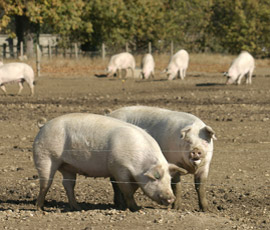 Pig farmers will take a giant 15ft sausage to Westminster on Mar 3 as part of their rally to get retailers to pass on a fairer price for pork products.

The campaigners are due to hand in a petition at 10 Downing Street which calls for greater support from supermarkets and processors in response to rising feed prices. The petition has so far gathered over 6000 signatures.

But campaigners will also be wielding a giant fake sausage so they can ask MPs and supporters to answer their SOS to ‘Sign Our Sausage’.

They are hoping it will prove an eye-catching prop that attracts maximum publicity.

The National Pig Association, which is organising the protest, has pointed out that pig farmers are losing more than £21 on every pig they sell. The industry as a whole is losing £3.6m a week.

Barney Kay, general manager for the NPA, told Farmers Weekly: “We are not asking for the end price of the product to go up – just a fairer distribution of the margin.

“Retailers are still making profits from pork and so are processors. We are asking why pig producers are subsidising those profits.”

Mr Kay said it was frustrating that the industry was being forced to have the same conversations it had with retailers three years ago.

This was despite research showing strong support for British product among consumers because of its high welfare status.

“If retailers are serious about their social corporate responsibility statements they need to put their money where their mouth is,” he said. “And if government is serious about food security then they need to apply pressure for this to happen.”