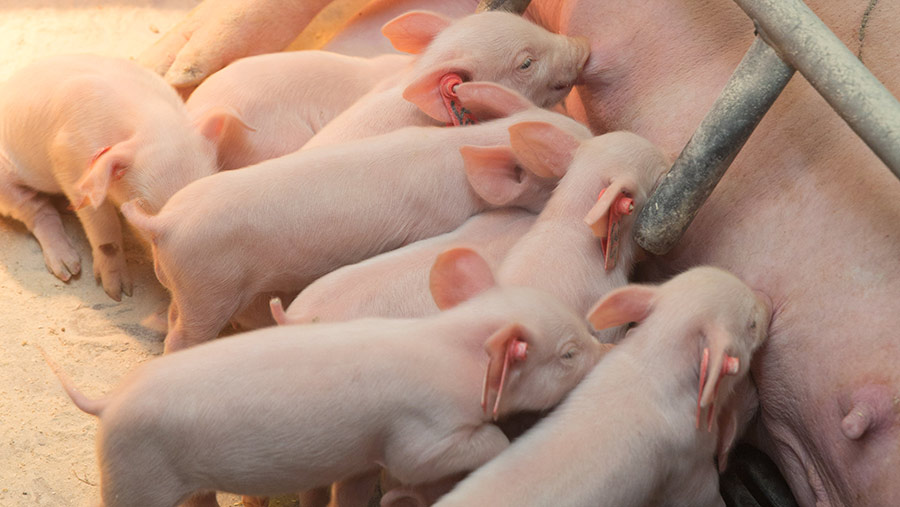 Management during the early stages of a piglet’s life dictates its future growth and potential, with studies frequently showing an increased weaning weight can result in optimised finishing time and weight.

However, many factors in the farrowing house can have an impact – both positively and negatively – on weaning weights.

Colostrum is a vital factor in pig performance – both in terms of quality and intake.

When a piglet is born it has very low energy and very little immunity. Colostrum provides that energy and essential proteins for piglet development.

It is also enriched with the maternal antibodies – immunoglobulins G (IgG) – which are responsible for piglet immunity.

It is well known that getting colostrum into an animal within the first six hours is critical. However, the first two hours post-farrowing are even more important, according to some studies.

These have shown that in cases where piglets do not get any colostrum within the first two hours, the survival rate can be as low as 10%.

There could be a 70% variation between early- and late-produced colostrum.

From a management point of view, this is a really important factor to consider in scenarios of lengthy farrowing in hyper-prolific sows.

This is because by the time the last piglet starts getting colostrum, the quality may be compromised.

It is therefore important to manage supply and resources to ensure all piglets are getting optimal colostrum in those first two to six hours of life.

It is also important to note that after 36 hours the piglet’s gut closes, stopping IgG from being absorbed.

In contrast to milk yield, colostrum yield is not related to litter size, meaning the larger the litter, the lower the amount of colostrum for each piglet.

The optimal amount fed should be about 250g within the first two hours. When you have prolific sows this becomes more difficult.

The level at which pig performance can become compromised is when piglets receive less than 200g. This is where the greatest incidences of pre-weaning mortality can be seen.

Several factors can influence yield and quality. Often, these can be controlled by the producer. They include:

Something that is also influential, but often overlooked, is the pain/stress for the sow at farrowing and the impact this has on colostrum quality.

A recent study by Kuller et al looked at the use of paracetamol in sows around farrowing.

The variation of immunoglobulin levels did not surpass 40% in litters from sows that received paracetamol. It was more than this in sows that did not receive paracetamol.

2. Minimise the risk of scouring

Inadequate levels of colostrum can lead to scouring. This is largely down to poorer immunity.

In a study of 135 sows, the amount of IgG was lower where there were greater incidences of scours. Several diseases can cause scouring.

As well as ensuring optimum colostrum to boost piglet immunity, hygiene in the farrowing house is essential to minimise the risk of co-infection of other piglets.

However, hygiene alone may not be enough to remove the presence of pathogens in the farrowing house.

Piglets burdened by disease are more likely to suffer from gut health issues which will impact the absorption of nutrients and ultimately lead to negative growth.

In cases where infection pressure has been particularly high, this results in an additional 5-12 days to slaughter compared with healthy pigs.

The level of iron in piglets at birth is extremely low, placing them at greater risk of anaemia.

The sow’s colostrum alone is often not enough to provide the iron required, meaning that by day three post-farrowing, a piglet’s iron reserves will be completely depleted.

Iron is essential for the development of the immune system. Symptoms associated with anaemia will often manifest in pale-looking piglets, a rough coat, and compromised daily weight gain.

A recent study compared healthy piglets and anaemic ones at 35 days old. It showed an average weight difference of 1.5kg between the two groups.

However, the problem goes beyond the farrowing house and a failure to grow and/or develop a robust immune system will ultimately affect an animal for the rest of its life.

Therefore, external supplementation is essential. There are several treatments available, but some may be better than others.

A new study carried out by Sperling et al investigated the haemoglobin (Hb) levels of piglets at weaning on European farms – with haemoglobin levels of <9Hb indicating anaemia.

It showed a huge variation between animals treated orally and those treated via injection, with 34.3% of pigs given an oral iron treatment still classified as anaemic, compared with just 7% anaemia where piglets were injected with gleptoferron.

Eduardo Valazquez was speaking at the recent Pigs Tomorrow Conference