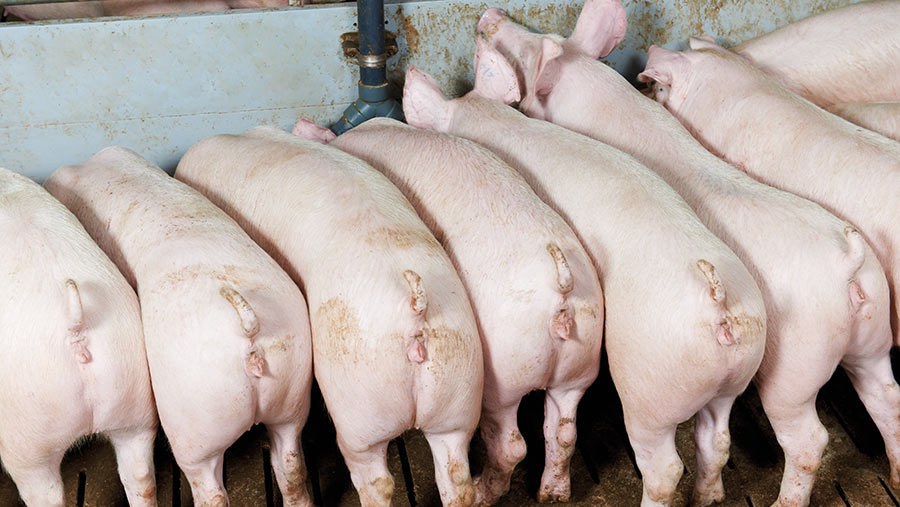 Improving pig health and delivering nutrients to pigs more precisely through their different growth stages can reduce cost of production and carbon footprint.

This is according to Steve Jagger, senior pig nutritionist at feed manufacturer ABN.

Dr Jagger says farmers can tend to feed at higher levels than they need to.

This is because they are feeding for a desired performance rather than an achievable one, or they are aiming to satisfy the needs of the smaller pigs in a group.

He also encourages farmers to remember that cheaper, lower density feeds may not be as cost-effective as more expensive, higher density feeds, once the cost a pig is determined.

See also: How do field beans and forage stack up in pig diets?

“This is a very difficult time, so anything that can be done to improve efficiency and reduce feed cost/pig is of vital importance,” he says.

Dr Jagger shares his thoughts on the three main areas where feed efficiency can be improved.

While the diet must be correct for the weight of the pig and its performance, farmers also need to find the programme that gives the lowest cost/kilo of gain.

Determining a pig’s feed requirements is done most accurately by looking at its lean and lipid growth rate curves alongside its total growth rate and feed intake.

If the lean growth rate of a pig is already at its maximum, giving it more nutrients will have no effect on growth and increase costs.

Tightening weight bands can help ensure the correct diet is fed to most pigs. In groups with large weight variations, small pigs may be on too low a specification diet and heavy pigs may be receiving too much food.

Breed and sex will also affect dietary needs. With genotypes improving rapidly, it is important to understand their requirements for optimum growth.

Breeding companies can offer advice, but environmental elements that affect performance should also be factored in.

Split-sex feeding can be effective because gilts have lower lean growth and reach maturity an earlier age than boars.

By increasing the number of feeding phases (different diets fed to the pig as it grows), the nutrient requirement is more accurately met.

The multi-phase concept applies through the life of the growing pig, but the most likely time for over-feeding is in the final finishing stage.

When feeding more than one diet in the finishing stage, make sure the bin is emptied of the final finisher diet before young pigs are introduced to the finishing pen. This will ensure the correct diet is fed from the start.

The most efficient system would feed each individual pig its requirement on a daily basis.

Work is progressing to develop feeding systems that could feed a group of pigs on an individual basis, but this has not been commercialised yet.

Another feeding concept is choice feeding. This is where two extreme diets are created with a range of lysine (amino acid) levels such that all requirements can be met if the pig chooses the correct proportion of diets.

Work was conducted several years ago at the University of Leeds comparing choice feeding and phase feeding from weaning to finish.

It appeared that the pigs chose a different proportion of each diet with time and there was a difference between sexes, where the boars chose higher lysine than the gilts.

With choice feeding, a much lower lysine was selected during the final finishing stage compared with the phase-feeding regime.

An immune response leads to nutrients being diverted away from growth to support the immune system. Therefore, any stressors that might trigger an immune reaction should be minimised.

In a university trial Dr Jagger was involved with, a health challenge identified caused an 8% increase in feed conversion ratio, showing a reduction in efficiency.

For feeding to be efficient, the gut needs to be healthy. Nutrition can play a role in improving gut health, along with certain additives.

Dietary components such as certain amino acids, prebiotics, diet acidification and product particle size have an influence on protection mechanisms such as mucus production, the integrity of tight junctions (barriers between cells) and even the composition and activity of the gut bacteria.

Plant extracts, probiotics and products from yeast cell walls have been shown to modulate the immune response or have an anti-inflammatory effect.

“An increase in the efficiency of diet utilisation is inextricably linked to a reduction in the on-farm carbon footprint, since more is being obtained from less,” says Steve Jagger, senior pig nutritionist at feed manufacturer ABN.

Research trials that Dr Jagger has been involved in have shown:

There is potential, too, for domestically grown feeds to increase environmental sustainability.

“The carbon footprint of the diet itself is fundamentally influenced by its raw material makeup,” he says.