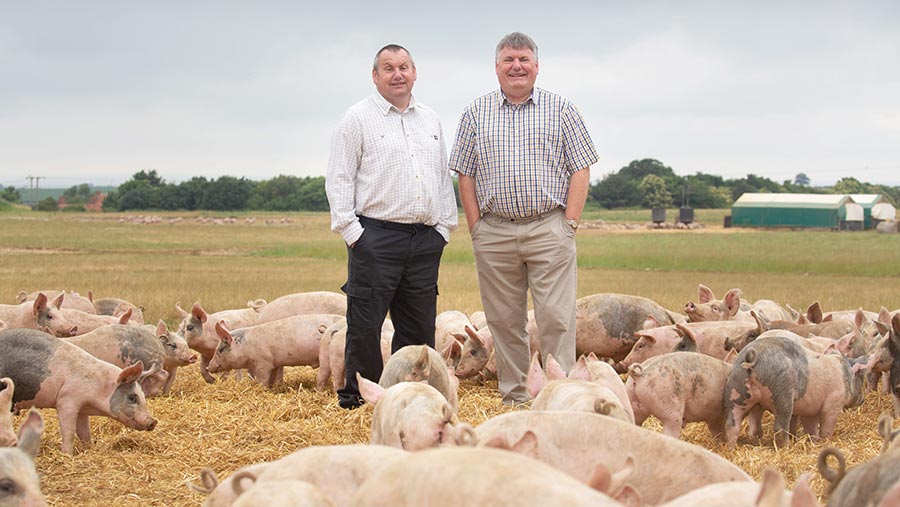 Setting up single-parity herds has been central to improving pig health across the entire breeding and finishing pig operation at North Farm Livestock (NFL) in Holt, Norfolk.

NFL was one of the first farms to set up single-parity herds in 2012 and remains one of the few doing this today.

The farm is owned and run by Michael, and brother Ian, Baker. They are also the current Farmers Weekly Pig Farmers of the Year.

The farm has three outdoor breeding herds, a dedicated gilt mating unit (GMU) which has the capacity to supply gilts for up to five breeding herds, and 15 finishing sites with 1,800 pigs finished a week at 105kg to Tulip.

Before the move to single-parity herds, each breeding site had sows of different ages, meaning there could be 2.5-year-old sows running alongside gilts.

Jake Waddilove, the farm’s vet, believes this created destabilisation in the pigs’ health.

He explains: “It is like school kids starting a new term. Kids of different ages, from different homes, with different levels of challenge mix together and they get ill.”

Single-parity herds introduce gilts and boars from high health farms to a dedicated GMU, where they are grown on and mated.

At NFL, shortly before they are due to farrow, they move on to one of the three dedicated breeding units where the whole herd remains until they are culled out at parity six (approximately 2.5 years in the herd).

No other pigs enter the herd during the 2.5 years. This means there are only animals of the same age within each breeding herd and they all have the same level of immunity and challenge.

Then, at the end of parity six, a full depopulation takes place, with gilts repopulating the site from the GMU.

Moving over to a single parity herd was relatively straightforward, with sows in the old herd culled out and a new herd from the GMU set up on a different site.

Gilts arrive from high-health farms on to the GMU at 7kg or four weeks, and remain there until three to four weeks before farrowing when they will be moved to the clean breeding unit.

The boars are the last animals admitted into the herd, arriving nine weeks before mating starts. Once they move on to the breeding unit the herd is closed.

The cost of running single-parity herds is hard to calculate, says Michael Baker.

“We don’t know the additional cost in running a single-parity herd versus one with mixed parities,” he says. “But what we do know is the health benefits across the breeding and finishing units.

“The increase in finishing performance would more than make up for any costs in running it.”

One of the main additional costs comes from having to breed more gilts to make up for any losses throughout the 2.5 years.

Mr Baker explains: “Because we can’t replace any losses in the breeding herd, we take in 8% more gilts at the beginning to account for any losses. This means we still have the number of finished pigs coming through.”

Before the switch to single-parity herds, disease levels were higher in the finishing herds. Although they were not bad, NFL knew they could be better.

Mr Waddilove says: “In the winter of 2012, for example, we were treating 20-30kg with in-feed antibiotics to help manage respiratory disease.

“At its worst our antibiotics use would have been up at about 40mg/kg PCU in 2012. Since then we have it down to 0.3mg/kg PCU, which is an industry leading figure.”

He adds: “We have managed to improve health and cut antibiotics use by creating a stable level of challenge in the breeding herd.”

According to Mr Baker the unit was already performing well in 2012 before the switch to single parity.

But the move has allowed the farm to drive performance and produce a better quality of finished pig.

“The fact we are culling out the breeding herd after 2.5 years also allows us to bring in new and better genetics,” he says.

Mr Baker also says staff morale has improved in both the finishing and breeding herds.

“Staff managing the breeding herd get a new herd every 2.5 years, and because they are producing healthier, more productive pigs it improves morale. The same is being seen on the finishing side.”

Mr Waddilove adds: “If you want a good quality finishing pig you need to start with a healthy piglet in the breeding herd.”

All pigs in the breeding herd are subject to a strict vaccination protocol to maintain their high health status. This means the piglets also receive some of the maternal immunity. 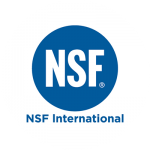 The Farmers Weekly 2020 Pig Farmer of the Year Award is sponsored by NSF.