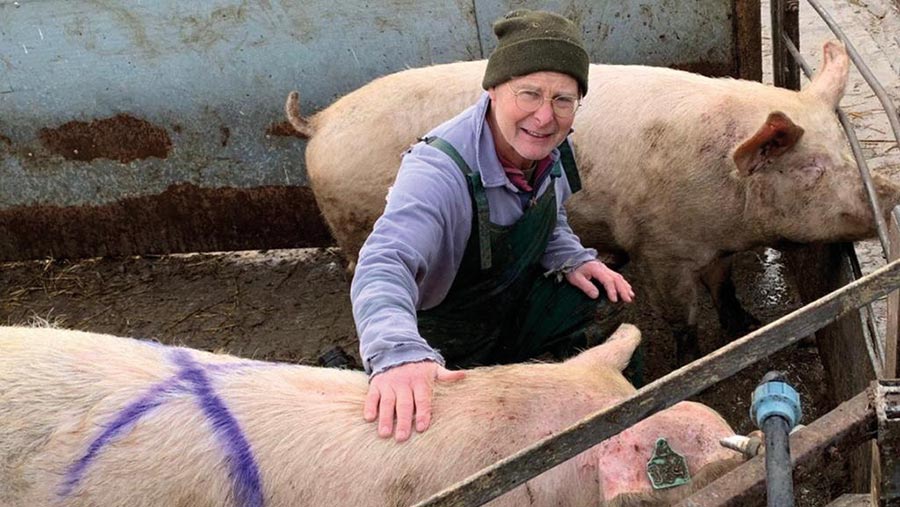 A Dorset pig farmer is urging the government and supermarkets to do more to support producers struggling with low prices and rising input costs.

Robert Lasseter spoke out after he revealed on Twitter that he sold seven sows for £4.51 each before Christmas – whereas before Brexit, the animals would fetch about £150 each.

Pigs and arable farmer Mr Lasseter, who farms 160ha in the Corton Vale, including 250 sows, said the tweet had received more than 650,000 impressions since 31 December.

Prime minister Boris Johnson and Defra ministers Victoria Prentis and George Eustice were tagged – but Mr Lasseter has not received any reply from them.

Dear Prime Minister @BorisJohnson and your team @MPGeorgeEustice and @VictoriaPrentis , see attached my sales invoice 7 sows sold before Christmas. They made £4.51 each. (There are about 400 sausages in a sow.) Pre #Brexit they were worth about £150 each. There’s a #pigs crisis. pic.twitter.com/TZo18VzaCh

“This is the worst situation it has been in my farming career and that includes the foot-and-mouth crisis in 2001,” he told Farmers Weekly.

“Whatever the causes – and for me it’s more about the politics than the pandemic that has got us where we are today – it’s a really dire situation.”

Mr Lasseter, who voted to remain in the EU, blamed Brexit and oversupply for the price slump.

“The supply to the continent has effectively been cut off. We’re having to pay tariffs to export our pig meat, yet imports are tariff-free. That’s down to our leaders and a consequence of Brexit,” he said.

“We also have a dire shortage of labour, particularly in abattoirs and on farms. That’s also down to our national policy.”

He urged the NFU and farm assurance bodies such as Red Tractor to work harder to secure a fairer position in the supply chain for pig farmers.

“It’s incredibly one-sided and farmers are getting a bad deal,” he added. “Should the industry have a real rethink and no longer be independent of the rest of the supply chain?”

Mr Lasseter said supermarkets should also increase pork prices and give a fairer share of the profits to primary producers. And they should stop displacing British produce with cheap imports, he insisted.

“Lidl and Aldi do a good job of supporting the countries that they trade in, whereas it seems to me that our own UK supermarkets are all about ‘stack it high and sell it cheap’.”

Zoe Davies, chief executive of the National Pig Association (NPA), said about 90% of the UK’s cull sow carcasses usually go to Germany to be processed into sausages, patties, salami and other cured meats.

But Germany had stopped taking UK cull sows due to the crisis in its own pig industry.

“They are awash with pigs and they still have not got an export market due to African swine fever,” said Dr Davies. “They have also had problems with Covid in the [processing] plants.

“Brexit is part of the problem. We’re not part of the EU anymore, so why should see us as a priority?”

Dr Davies said paying pig farmers “peanuts” for their cull sows may soon see haulage costs could outweigh the price of any sales. This would result in farmers culling more healthy pigs on farm and a drop in replacement rates, she added.

She also said the government’s package of measures to support the pig industry, including temporary visas for up to 800 pork butchers to come to the UK to work in abattoirs for up to six months, had not resolved the problems. “Pigs are still being culled on farm – going in the bin,” she added.

Dr Davies said farm minister Victoria Prentis has committed to making the pig industry the next sector that comes under the spotlight after dairy.

The NPA has also requested the Environment, Food and Rural Affairs committee hold an enquiry into the UK pig industry crisis.

Defra said the pig industry has been struggling for a variety of reasons, including very tight supply and shortages of staff running at 12-23% across the board, the reduction in exports to China which has created a backlog of pigs for the domestic market, which requires more butchery, and carbon dioxide issues that have caused disruptions to abattoirs.

A spokesman said: “We continue to keep the market under review and officials meet on a weekly basis with representatives of pig processors and producers to discuss the ongoing situation.”