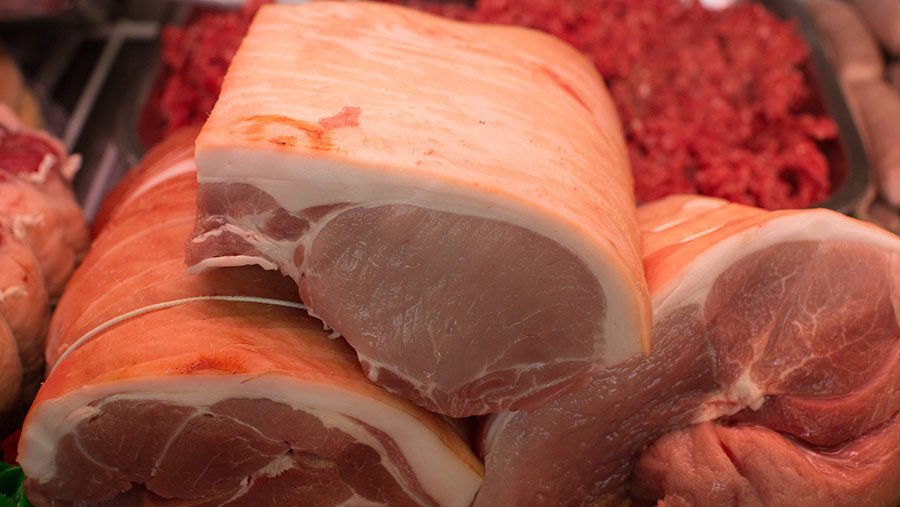 European pork exports have almost trebled in value, on a 31% increase in volume as China looks to plug the yawning supply gap created by African swine fever (ASF).

But analysts remain puzzled at the GB price, which has not kept pace.

According to AHDB Pork, total exports of fresh and frozen pork reached 218,000t in May. That figure represents an increase of 31% in volume, while values rose by 40% compared with the same month a year ago.

Since the start of the year, the all-Europe price has risen from 116p/kg to 152p/kg.

AHDB analyst Jennie Tanner explained that a key driver for the increase was China’s ongoing battle with ASF.

Figures suggest that up to 200 million pigs may die or be culled due to the disease in China.

“Unsurprisingly, due to the continuing effects of ASF, exports of fresh and frozen pork to China were up 88% in volume to 96,500t, accounting for 44% of EU exports,” said Ms Tanner.

Offal exports to China were also up about 30% at 70,700t, with value almost doubling.

“The severity of the ASF situation means imports are unlikely to slow down, although recent Rabobank reports indicate that a lack of cold storage at China’s major ports is causing some logistical difficulties,” Ms Tanner suggested.

While the European market continues to be buoyed up, GB prices continue to drag their heels, leaving analysts questioning why.

Market commentator Peter Crichton said there was no justification for the slow price lift in the UK, which stands at 152p/kg for the week up to 19 July.

While our market lacks a spot price that would have seen it respond more quickly, it is not enough to explain the slow rate of increase, he said.

The experienced analyst, who has been working in the pig sector since 1973, said the lack of price movement had left him puzzled.

“For example, prices in Germany [156p/kg] have been consistently higher than the GB price over the past months, which is something I have not seen in all the time I have been involved in the pig sector,” he said.

And he voiced his concern that UK pig farmers were burdened with high production costs compared with their EU counterparts.

“Our costs of production are far higher than in Europe at 140-145p/kg, so with the SPP at 152p/kg, our margins are very small by comparison,” Mr Crichton added.

“We are simply not being paid enough for our products,” he warned.