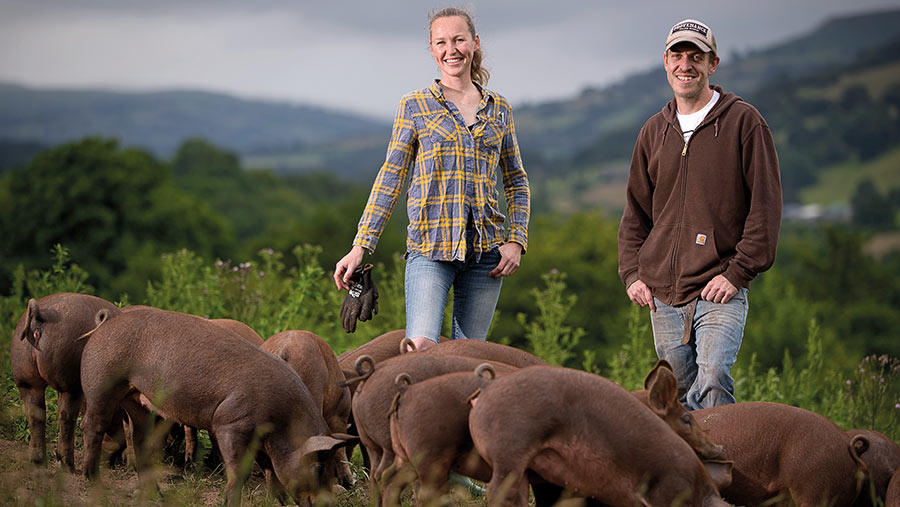 A study has shown that rearing pigs at pasture with a diverse range of grasses in the sward boosts their meat with fatty acids beneficial to human health.

The on-farm research trial in Wales showed a significant increase in alpha-linolenic acid (ALA) in the meat from gilts kept on leys of ryegrass, clover, sainfoin, chicory, kale and forage rape for three months before slaughter and fed 2kg a head a day of concentrates, compared with those reared on the same quantity of concentrates on bare land.

The trial was run with gilts only, so the dataset could not be influenced by gender differences, and they were all progeny of the same boar.

Pigs were paired and split at random into the allocated treatment groups at 92 days old.

Nine were reared in a grass paddock and 10 in a bare paddock. Both were fed a grower-spec ration before switching to a finishing-spec ration at 120 days.

The volume of feed was restricted to encourage grass intakes in the pigs on the grassland.

The pigs were slaughtered on the same day at about 93kg.

Tests to establish the fatty acid profile of meat from each group were carried out at the Food Technology Centre, Llangefni, using two loin steaks from each animal.

Caroline Mitchell, director of the food quality management consultancy firm FQM Global, who oversaw the project, says the meat from the pigs with access to forage had significantly higher levels of palmitoleic acid, stearic acid and ALA.

The analysis showed that ALA was the fatty acid most affected by the addition of forage.

As pigs are unable to synthesise ALA, the significant difference between treatment groups is a direct result of the addition of forage to the diet, says Ms Mitchell.

There are known to be multiple benefits to humans from eating products containing ALA. These include preventing heart attacks, lowering high blood pressure and cholesterol, and reversing hardening in blood vessels.

Previous studies have shown that by manipulating feed, such as adding oils from fish, plants or seeds, it is possible to make the meat of pigs a functional food – food that offers health benefits beyond its nutritional value – as a result of its omega 3 and omega 6 content.

“It would be interesting to see if different forage leys can manipulate the functionality of the meat further,” says Ms Mitchell.

With only 19 gilts, the study was relatively small. To draw further conclusions on the influence of forage on meat quality, a larger dataset would be required, she admits.

However, the results to date could allow Forest Coalpit Farm to add value by offering a unique selling point.

Mr Holford and Ms Smith say meat quality is central to their business – they butcher and sell their produce direct to customers in pork boxes, and supply restaurants and butchers.

Breed, management and diet are all influencing factors, but the project quantified the benefits of forage, too, says Mr Holford.

“It’s been fascinating to look at the relationship between feeding pigs forage and the effect it has on meat and fat quality,” he says. “To find out that it affects the fat and makes a healthier product is just phenomenal.

“This just shows there is even more benefit to raising pigs outside on grass. Other producers can use this to quantify [the benefit] and add value to an already great product.”