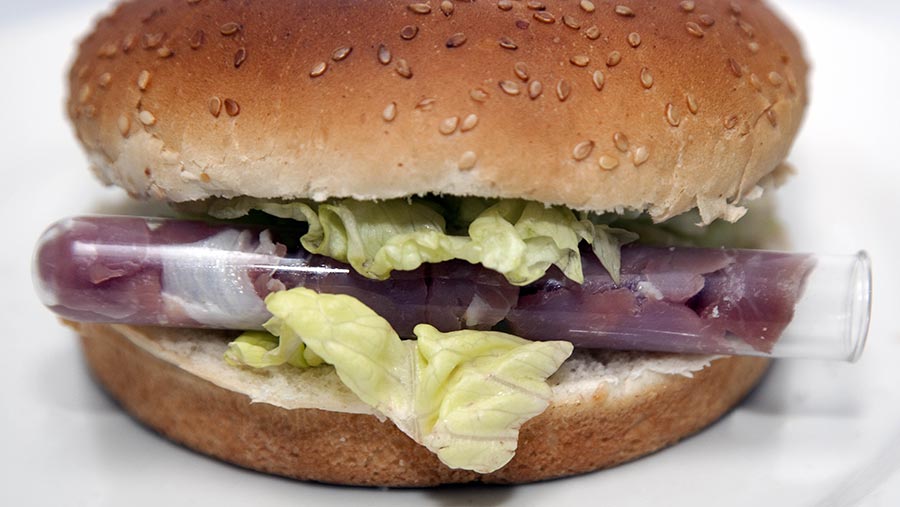 Most of the meat eaten by people in 20 years’ time will not come from slaughtered livestock, a new study claims.

The report, by US consulting firm AT Kearney, and based on expert interviews, predicts that 60% of meat eaten in 2040 will be from plant-based substitutes and cultured meat.

However, the NFU has dismissed suggestions that the traditional livestock industry is under threat from meat substitutes and lab-grown meat.

The study argues that the livestock industry will come under increasing pressure to stay viable over the next couple of decades.

In a sub-section headed “Livestock challenge”, the authors say up until now, the agriculture and meat industries have, for the most part, tried to address their challenges by further increasing efficiency of the conventional production methods.

But it predicts that the use of farm antibiotics “will cause antibiotic resistance of humans, resulting in major health risks”.

The report states: “The large-scale livestock industry is viewed by many as an unnecessary evil.

“With the advantages of novel vegan meat replacements and cultured meat over conventionally produced meat, it is only a matter of time before they capture a substantial market share.”

The study found that “novel vegan meat replacements and cultured meat have the potential to disrupt the US$1,000bn (£790bn) conventional meat industry”.

Commenting on the report, an NFU spokesperson said: “Innovation and new technology has always been central to the progress of British livestock farming.

“Although the science of lab-grown meat is interesting, the NFU believes there is great potential for livestock farming to continue its journey of producing safe, traceable and affordable food for the nation and it will continue to do so as long as the public demands it.”

Lords committee to ask if veggie ‘burgers’ are confusing consumers

Food and farming industry leaders are to be asked whether the use of terms such as “burger” and “sausage” to describe vegetarian and vegan products is confusing consumers.

Farmers across Europe have argued that using names that usually apply to meat-based products misleads consumers about the nature and nutritional value of the food they are purchasing.

On Wednesday 19 June, the House of Lords EU Energy and Environment sub-committee will ask experts whether a proposal from the European Parliament to ban the use of words such as sausage and burger to describe foods that don’t contain meat is in the interests of consumers.

In early April, the European Parliament’s Committee on Agriculture and Rural Development agreed to seek to restrict the use of descriptions like sausage, burger and steak to apply only to products containing meat and not to vegetarian alternatives.

The committee intends to hold a round table to discuss the proposal with a range of stakeholders, including the NFU, Quorn Foods and the Vegan Society.

Members will also be exploring what changes, additions or exceptions would improve the proposal, and whether it would be beneficial for the UK to follow suit if this rule were introduced in the EU post Brexit.