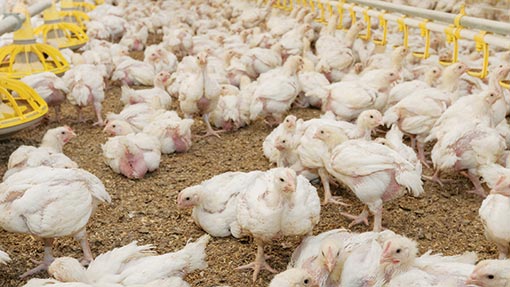 Management changes and the use of a feed additive have helped one broiler grower improve flock health, as Poultry World reports

A broiler producer from Worcestershire, who was facing pressure on operating margins, has significantly improved bird and bottom line performance since making a number of management changes.

Peter Dorey runs a 120,000-place broiler operation in four-deep litter sheds. The unit is contracted to a large integrator and had been experiencing an increasing range of gut health issues, variable growth and reduced bonuses due to finished bird quality.

He was also facing a major problem with complaints regarding the level of odour from the unit from residents nearby.

“We have always worked very hard to maintain optimal growth, high bird welfare and to achieve the bonuses available to us for high production levels and low mortality and condemnations,” he says.

Mr Dorey had already invested in a Draper indirect heating system and had seen some improvement in litter quality.

“But during the later stages of 2012 we were struggling to meet our own high standards and, as well as not achieving all the bonuses, we were also spending approximately £900 per crop on antibiotics in an attempt to manage enteric challenge and reduce the need for further treatment medication.

“I was aware that certain gut health supplements were associated with improved performance and a reduction in the need for antibiotics, when used alongside good management practices.”

As such, Mr Dorey began adding the natural additive Aviguard to the drinking water, introduced to chicks at five days old and administered over four to six hours .

The product works through a process known as “competitive exclusion”, which introduces beneficial bacteria into the gut of the chicken at such a level that the more harmful bacteria are denied the environment they need in order to survive and multiply. The product actually contains over 200 species of bacteria, all derived from normal healthy chickens.

While this concept is not new, the science behind the process has progressed significantly, says supplier MSD Animal Health. In particular, there is a much greater understanding about how mixtures of gut flora interact, and this has become a bit more “mainstream” since the advent of the “seed, feed and weed” initiative.

Mr Dorey was keen not only to improve bird health and performance, but was also aware of increasing legislative pressure on the regular use of antibiotics. “We wanted to get away from our previous dependency on Tylan,” he told Poultry World.

Since introducing the water additive, he has been able to withdraw antibiotics completely, other than when chick starter medication is necessary.

The unit has now completed six full crops since the Aviguard programme was introduced, along with a general tightening of management factors.

Levels of pododermatitis and hockburn have fallen, crop by crop, and Mr Dorey has seen levels as low as 1%, 4%, 6% and 7% in November and December, which are months when these problems are generally greater.

“Pododermatitis and hockburn are understood to be related to wet litter and enteric challenge. We have certainly seen consistently improved litter conditions over the past nine months and the performance data reflects this,” he says.

Other measures, such as feed conversion, mortality and EPEF have also improved.

The Environment Agency had also suggested that an improvement in litter quality would reduce the overall odour levels, and certainly there has been a drop in the number of complaints from residents close to the unit.

“Good litter produces a less offensive odour which in turn is easier to neutralize, while poor wet litter produces a pungent and more offensive odour,” says Mr Dorey. “In addition, having good dry litter also allows us to spray an odour reducing litter additive, which is in a mist that can be applied without compromising bird welfare. Recent crops have had the litter additive continually for the last two weeks of each growing period.”

Mr Dorey and the unit vet continue to track performance on a crop-by-crop basis, and he has recently introduced a barrier system, with footwear changes between sheds. He is confident, but not complacent.

More on this See our Poultry Health and Welfare mini-site