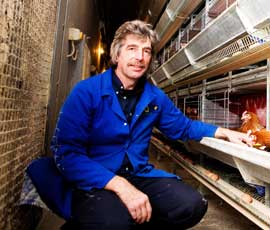 Processors are being warned they could see as much as a 300% increase in the price of second class eggs, due to a reduction in the supply of legal eggs available for processing in Europe.

It is estimated that 25% of EU cage egg producers have been flouting the conventional cage ban since it came into force on 1 January.

But with many EU countries now enforcing tough penalties on these producers, the British Egg Producers Association is concerned it will have a major impact on the egg market – with prices expected to soar.

“It is a very difficult time for everybody,” said BEPA chairman Elwyn Griffiths, “Costs are increasing between 150-300% due to the European situation – it really is that dramatic,” he told Poultry World.

It is believed some European countries are now taking a strong stance and any producers operating illegally are being forced to slaughter their birds.

Mr Griffiths said it was unknown how many producers would re-invest in legal enriched systems. But he predicted the figure would be low, as many banks would be unlikely to lend capital to finance re-builds, he said.

“How much of that is going to be replaced is a big question mark,” he said. “Figures show 15% of eggs were being imported into the UK and those eggs were naturally cheap. But now Europe needs their eggs there is going to be no such thing as cheap eggs.

“It’s not good news for anyone [processors or producers] because processors aren’t in a situation to pass on price rises as it takes a while for price increases to fall through.”

Mr Griffiths said BEPA members had warned the European Commission (EC) that EU countries wouldn’t comply with the ban, but they ignored them, insisting all countries would be compliant by 1 January.

“The disruption we are seeing in the market could have been avoided if the EC had heeded our warnings,” he said.