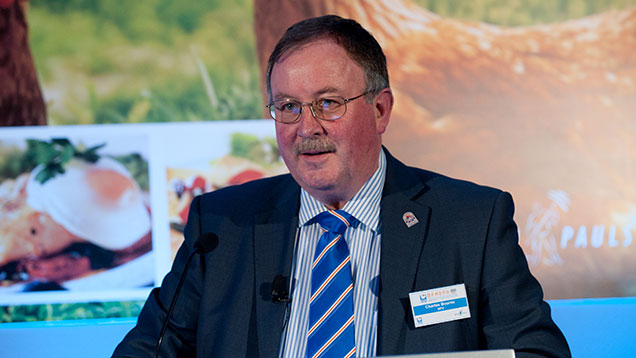 Gloucestershire broiler farmer Charles Bourns has been made chairman of Copa-Cogeca’s working group on eggs and poultry, following 14 years serving as vice-chairman.

Copa-Cogeca represents the interests of more than 60 farming unions at European level.

See also: How US free-trade deal could harm UK poultry

Mr Bourns sits on the NFU’s poultry board, and served as its chairman for 14 years.

He said: “It’s going to be a difficult few years for the poultry and egg sectors, but I remain optimistic that the long-term future for the sector is positive.

“I thank my fellow European colleagues for giving me their full support today and I will work towards ensuring we have a profitable and sustainable sector – working together to address market volatility, trade concerns and the health and welfare issues particular to our sector.

“My task now is to make sure that the voice of the working farmer is heard by the Commission, European Parliament and Council.”
Charles Bourns

“My task now is to make sure that the voice of the working farmer is heard by the Commission, European Parliament and Council.”

The NFU’s poultry board chairman, Duncan Priestner, said he saw the appointment as “a great opportunity to increase our influence at the EU level”.

“The board, which Charles is a part of, works closely together on all issues that affect our members, both nationally and at the EU level and it’s clear from the outcome of today’s election that our European counterparts appreciate Charles’ dedication to this cause as much as we do at home.”

Mr Bourns will be supported by Jean-Michel Schaeffer, from France, who was elected vice-chairman.